The Walking Dead TV show on AMC fittingly debuted on Halloween night 2010. The Walking Dead comic books by Robert Kirkman, Tony Moore and Charlie Adlard feature a variety of characters struggling to survive after a zombie apocalypse. Led by sheriff Rick Grimes, the survivors search for a safe haven from the encroaching zombie hoards. If these decaying creatures make your skin crawl, peruse our gallery of The Walking Dead t-shirts and merchandise like the Rick Grimes t-shirt, zombie comic book tee and AMC Walking Dead costumes.
To buy a T-Shirt, click the image or link for store and size information. 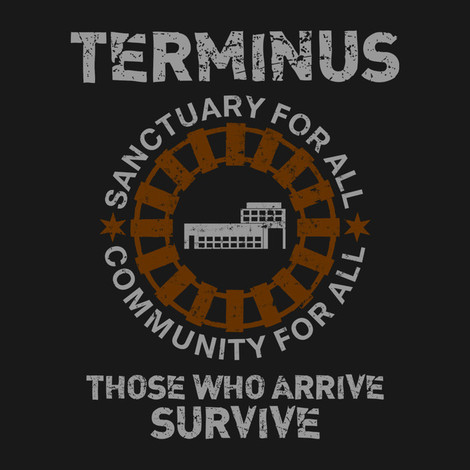 BUY
The Walking Dead Terminus t-shirt
Description: The design on this clothing item will let fellow survivors know that Terminus is a sanctuary for all and a community for all. Just follow the railroad tracks to the end. Be sure to tell everyone you know that those who arrive, survive. Wear it to watch Rick Grimes, Daryl Dixon, Carl, Glenn, Maggie and the rest their "family" take on the cannibals at Terminus. Link to: The Walking Dead Terminus 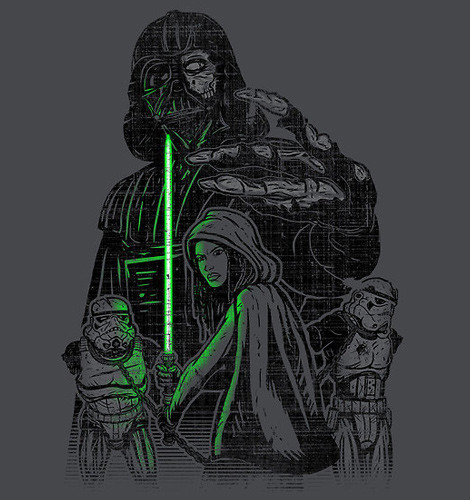 BUY
Skywalking Dead t-shirt
Description: Since the show premiered, people can't wait to get their hands on their very own AMC The Walking Dead shirt. This unique Skywalking Dead design combines Michonne, one of the TV show's zombie slayers, with Star Wars. The comic style appearance lends itself to fans of all of the different series mediums, including The Walking Dead books, comics and AMC television show. If you haven't had the pleasure of reading the books or comics yet, then be sure to do some catching up before you watch the next season. Link to: Skywalking Dead 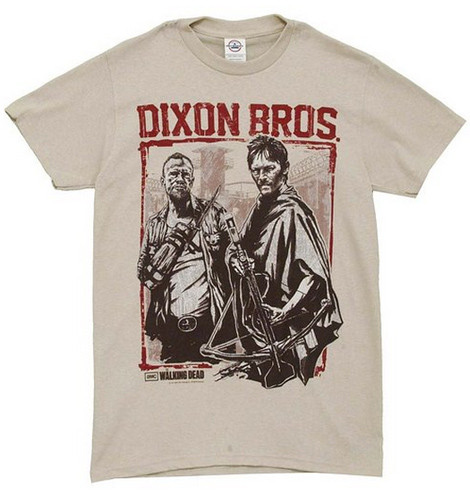 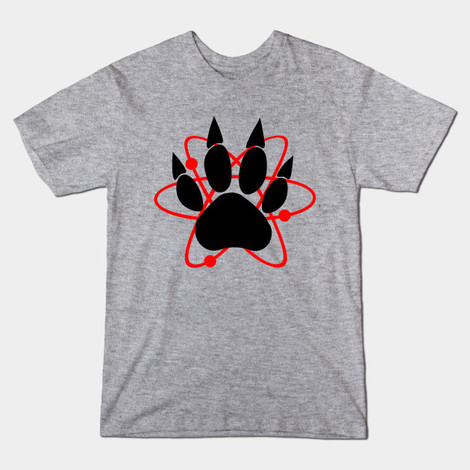 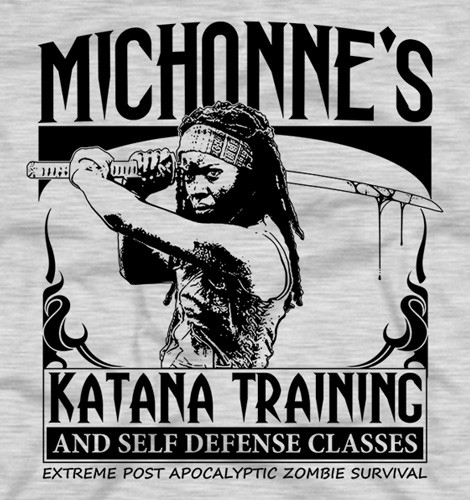 BUY
Walking Dead Michonne t-shirt
Description: If some of The Walking Dead shirts are a little gorier than you would like, this silhouette style Michonne design offers a more subtle, yet highly effective advertisement for Michonne's Katana Training. We first meet Michonne at the end of season two. The zombies she is walking have no jaws or arms. Pick up this training design for yourself and some of the Walking Dead comics for your best friend or vice versa. Any of these items would make a great gift for someone that shares an affinity for all things horror, including the Drew Struzan Walking Dead poster art. Link to: Walking Dead Michonne 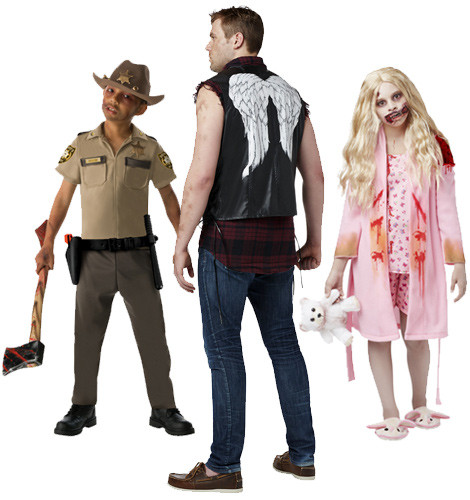 BUY
Walking Dead Costumes and Masks
Description: If you've have ever dreamed of being a zombie or that you were being chased by zombies, then these Walking Dead Halloween costumes, masks and latex prosthetics will give you the look that you're after. If you fancy yourself a zombie hunter then pick up a child, teen or adult Sheriff Rick Grimes costume. If you enjoy the gorier side of the TV show, then The Walking Dead zombie costumes, masks and prosthetics will give you that living dead look that will turn heads, while making it appear as if your own is going to fall off. Link to: Walking Dead Costumes and Masks 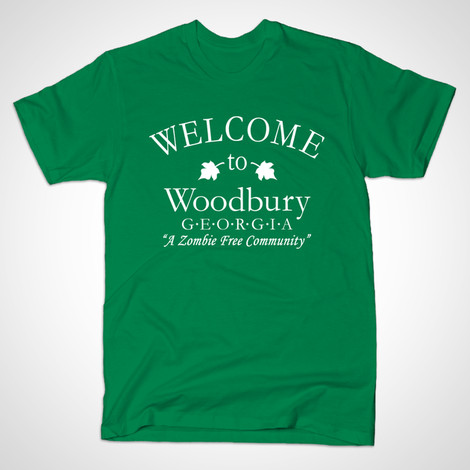 BUY
Welcome to Woodbury t-shirt
Description: When the world has gone through a zombie apocalypse, who can you trust? Sure, a sheriff from the former life might fit the bill, or even Daryl Dixon and his trusty crossbow. However, the "lucky" ones have taken refuge in the walled town of Woodbury. Little do they realize the town's leader, who the people call the Governor, is a sadistic tyrant who ruthlessly kills both zombies and humans. Instead of a Rick Grimes t-shirt, consider one of these Welcome to Woodbury Walking Dead tees, which will let others know that you have been to the zombie free community. Link to: Welcome to Woodbury 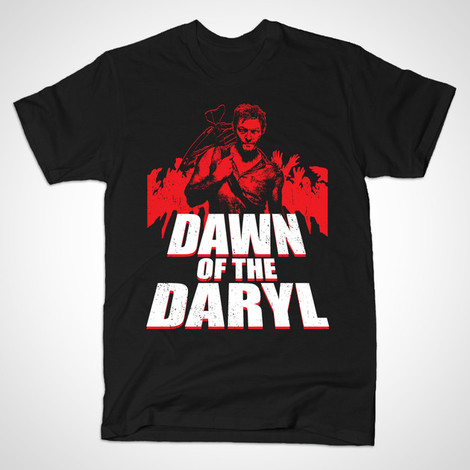 BUY
Dawn of the Daryl tee
Description: Daryl Dixon (Norman Reedus) has plenty reason to be upset. After all, his brother was left behind in the city when deputy Rick Grimes and a group of fellow survivors were surrounded by a hoard of zombies. The chip on Daryl's shoulder is obvious, but he thankfully turns his aggression toward the walkers instead of the crew. Armed with a crossbow, Daryl Dixon pierces the walking dead with the precision of a skilled marksman and the silence of an accomplished hunter. Link to: Dawn of the Daryl 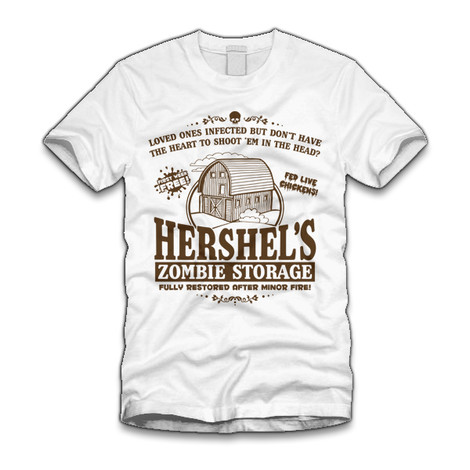 BUY
Hershel's Zombie Storage t-shirt
Description: Pair this funny Hershel's barn design with the AMC Walking Dead Poster shirt below or the Drew Struzan poster art from the hit series. They all highlight one of the best attributes of the show, the bloodthirsty zombies. Who doesn't love zombies nowadays? Oh yeah...Rick Grimes, Shane, Dale, Carl, Andrea, Glenn and the rest of them. Well, if you enjoy them or simply enjoy watching the group try to escape their grasp, get your merchandise today. Check out The Walking Dead Halloween costumes to join the undead. Link to: Hershel's Zombie Storage 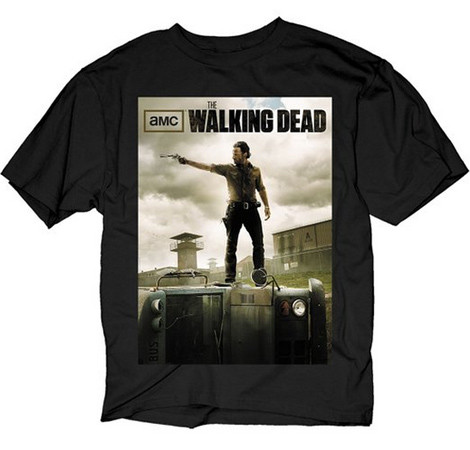 BUY
The Walking Dead Poster t-shirt
Description: There is a new sheriff in town and his name is Rick Grimes. The Walking Dead logo t-shirt shown here features the cowboy hat clad sheriff standing atop a tipped over prison bus. Unfortunately for him, the prison doesn't quite end up being the permanent home he hoped it would be. When The Governor arrives it quickly becomes overrun with zombies. This poor country boy has no idea what hit him. This is the new version of the old AMC poster art tee. Link to: The Walking Dead Poster 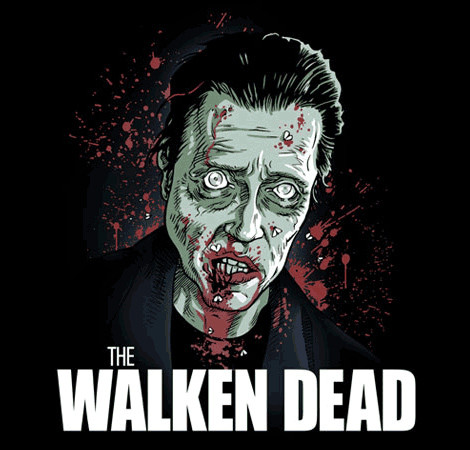 BUY
The Walken Dead t-shirt
Description: This creative and hilarious parody design is based on the popular POYKPAC comedy skit called The Walken Dead. In the video, a virus plagues our civilization, destroying all parts of the brain except for the part that controls basic motor functions and the part that stores Christopher Walken quotes. As a result, the zombies walk the earth in search of brains and cowbell, while at the same time spouting out famous Christopher Walken quotes. Link to: The Walken Dead 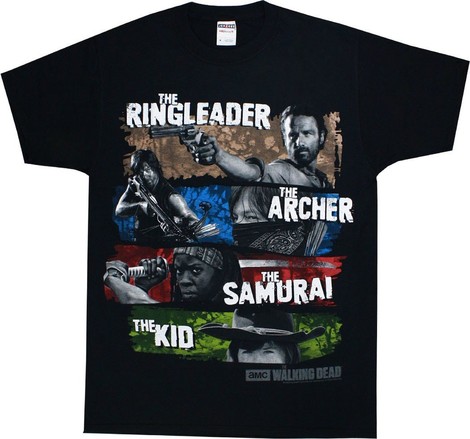 BUY
Ringleader, Archer, Samurai & the Kid Walking Dead t-shirt
Description: Get ready to take out zombies in one of these spaghetti western inspired AMC Walking Dead t-shirts. This bestselling design features Rick Grimes (Andrew Lincoln), Daryl Dixon, Michonne and Carl. It was inspired by the Clint Eastwood western The Good, the Bad and the Ugly. Be sure to check out the Walking Dead costumes and other merchandise in the gallery. Fans love it all, so grab a comic tee for a friend as a pleasant present. Everything is to die for...so to speak. Link to: Ringleader, Archer, Samurai & the Kid Walking Dead