Michael Jackson is indisputably the best recording artist of all time. Michael Jackson's life was devoted to music and dance, from his early start with his brothers in the Jackson 5 at Motown to his record breaking solo career with hits like Thriller, Beat It and Billie Jean. Recognized not only by his voice and innovative dance moves, his eccentric wardrobe and lifestyle completed his dynamic persona as the "King of Pop". Moonwalk through our gallery of Michael Jackson merchandise including Michael Jackson jackets, Thriller costumes, gloves and Michael Jackson t-shirts like the Thriller tee and Beat It t-shirt.
To buy a T-Shirt, click the image or link for store and size information. 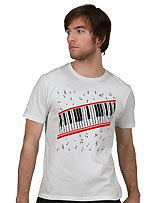 Beat It was the third hit single off the all-time bestselling Thriller album. Beat It was a departure from the norm in the eighties as it showcased the guitar stylings of rocker Eddie Van Halen to bring in a new fan base. The music video featured Michael trying to stop a potentially bloody battle between rival gangs. He intervenes on a knife fight and they dance it out. If this sounds familiar, then you recognize this piano key t-shirt that he wore. Show us you are an MJ fan with this Beat It tee or pair it with red pants for a Michael Jackson costume. Link to: Beat It Music Video 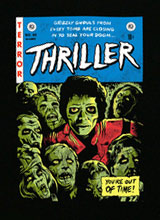 If you are looking for a shirt that speaks for itself, you have come to the right place. This Michael Jackson t-shirt features the "King of Pop" dancing in his red Thriller jacket. Match it with your glitter glove, black fedora hat and armband. Michael's moves have influenced countless artists ever since he stepped foot on stage as a child with his brothers, Jermaine, Jackie, Tito, and Marlon in the Jackson 5. These MJ tees feature him plain and simple, in black and purple. Link to: Thriller Michael Jackson 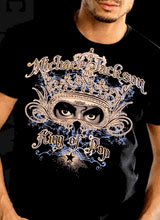 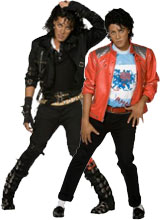 If you want to be Michael Jackson, then you have come to the right place. You'll find a variety of Michael Jackson costumes from different stages of his successful career, including his memorable outfits featured in the Beat It, Bad and Billie Jean music videos. MJ's attire always caused a stir and will go down in history as cutting edge and sometimes beyond. Dress in the Michael Jackson Thriller costume and show off your moonwalk to impress fellow fans. Always remember that impersonation is the sincerest form of flattery. Let the King of Pop live on through you. Link to: Michael Jackson Costumes 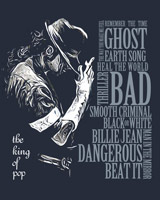 Whether you were witness to Michael as a child singing on the Ed Sullivan show or heard him for the first time in Scream with his sister Janet Jackson on MTV, this icon will forever be engrained in our lives as the "King of Pop". These Michael Jackson t-shirts display a stylish rendering of the "King of Pop" next to some of his most well-known songs, including Beat It. Wear it under red Thriller jackets. Pair it with a Piano Keys Beat It t-shirt to add to your Michael Jackson merchandise collection. Link to: Michael Jackson Songs 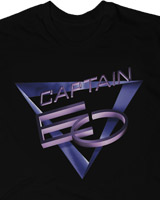 This Michael Jackson tee pays tribute to the 3D sci-fi film Captain EO, which was shown at Disney theme parks from 1986-1996. Directed by Francis Ford Coppola (The Godfather), it was re-released in 2010 following Jackson's death. He also made the film Moonwalker that featured his friend and actor, Joe Pesci. In it MJ dances around in a 30's style nightclub with a machine gun. He has often mentioned it as his favorite. Impress the MJ fan club and pair it with a Smooth Criminal t-shirt today. Link to: Captain EO Michael Jackson 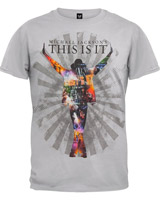 Michael Jackson This Is It t-shirt

If you are looking for a shirt that speaks for itself, you have come to the right place. This Michael Jackson t-shirt features a silhouette of the "King of Pop". Match it with your glitter glove, black fedora hat and armband. Michael's moves have influenced countless artists ever since he stepped foot on stage as a child with his brothers, Jermaine, Jackie, Tito, and Marlon in the Jackson 5. These MJ tees feature the This Is It movie poster art. Link to: Michael Jackson This Is It 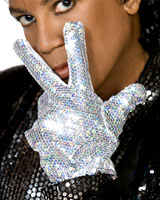 Deliver an electrifying performance with a Michael Jackson glitter glove that is the perfect MJ costume accessory. Available in both child and adult sizes, the trademark sparkly glove can be found in a variety of styles. The white sequined glove became a fixture after he wore it during his performance of "Billie Jean" on the Motown 25th Anniversary special in 1983. Link to: Michael Jackson Sequin Glove 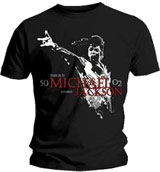 Michael This is It Tour O2 t-shirt

If you are a fan of Michael from the Jackson 5 days to the present, then this tee is for you. These Michael Jackson t-shirts feature MJ screaming with his arm extended. The concert title "This Is It" and the arena name "O2" are printed next to the singer's name. With his recent departure from our lives, we must remember that he will always remain with us in his music. Treasure the memories he brought you from the beginning to the end. Link to: Michael This is It Tour O2 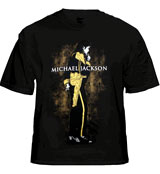 Wear this dark tee underneath one of the Michael Jackson costumes displayed in our gallery. The design on the front shows MJ standing as he contemplates his next dance move. Few performers can match his wide range of abilities. Surpassing the showmanship of Fred Astaire and Charlie Chaplin, two of his idols, Michael Jackson was a dancer, singer, choreographer, author and songwriter. Wear it with a Michael Jackson glove. Link to: Michael Jackson Stand 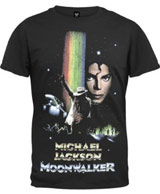 This black 80s Moonwalker MJ King of Pop t-shirt features the poster art for Jackson's movie spectacle Moonwalker. The design displays the King of Pop's face behind an image of him in his Smooth Criminal suit. The attractive design is a great way to pay tribute to the undisputed King of Pop. Put it on as you belt out songs like Dirty Diana, Man in the Mirror, Smooth Criminal, Billie Jean and Black or White. Combine it with a Michael Jackson Beat It t-shirt for the perfect gift. Link to: Michael Jackson Moonwalker 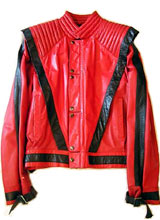 These replica Michael Jackson jackets are the perfect addition to any MJ costume. Whether you liked his style in the Beat It, Bad, Billie Jean or Thriller music video, you'll surely find a jacket that fills the void in your collection of Michael Jackson merchandise. Wear it overtop one of your favorite MJ tees as you execute the Moonwalk across your kitchen floor. Don't forget to clean up the streak marks when you're done. The classic Michael Jackson Thriller jacket is pictured on the left. Link to: Michael Jackson Jackets