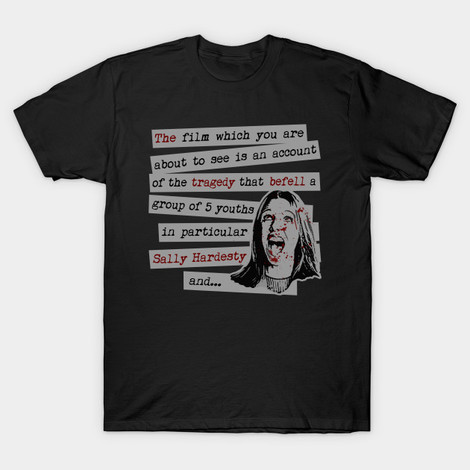 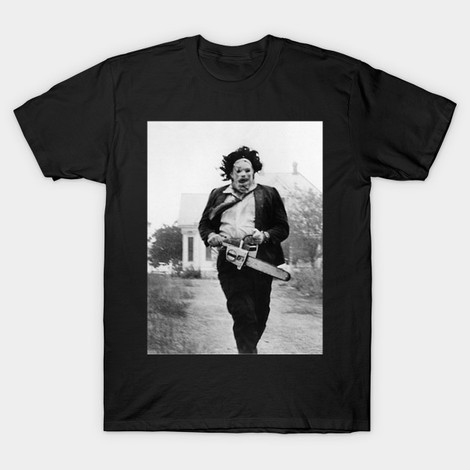 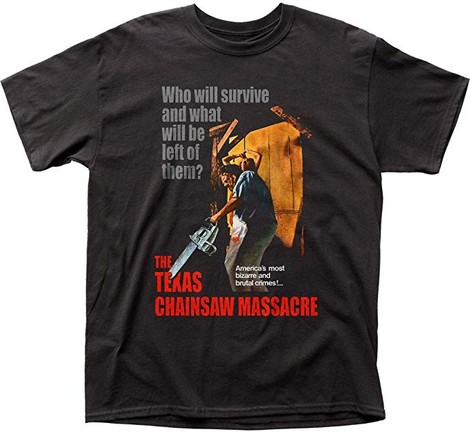 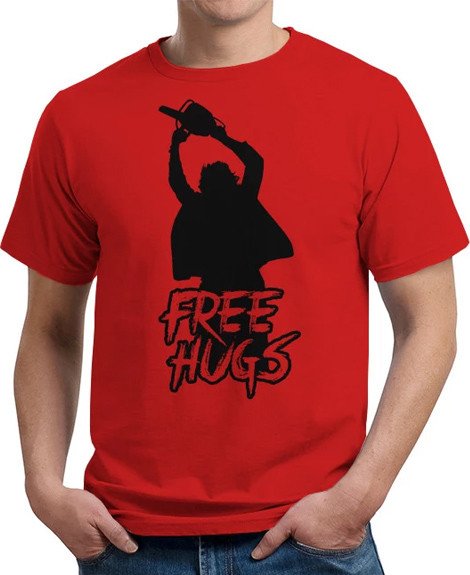 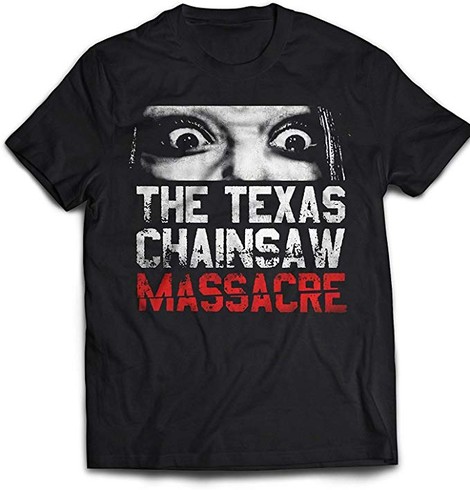 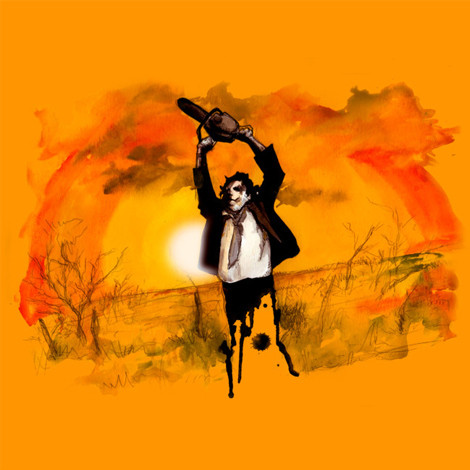 BUY
Chainsaw Sunrise t-shirt
Description: Hailing from Travis County, Texas, this Chainsaw Sunrise tee features Leatherface with the sun rising behind him. The front of this Texas Chainsaw Massacre tee displays a watercolor style design. The whole gang learned their cannibalistic ways from the "sheriff", a man who turned his family, including Leatherface, on to the taste of human flesh after having to survive on it as a prisoner during the Korean War. Wear this TCM shirt as part of your Leatherface costume to show your support for the family who now runs the county, after having killed the local sheriff. Add Texas Chainsaw Massacre masks below to complete the look. Link to: Chainsaw Sunrise 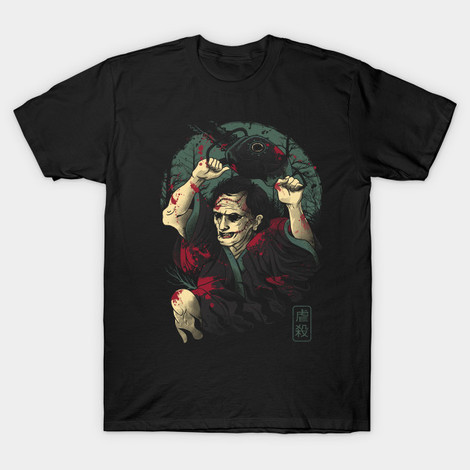 BUY
Leatherface Samurai Massacre tee
Description: The ukiyo-e inspired design on the front of this Texas Chainsaw Massacre t-shirt displays the human skin face wearing character of Bubba Sawyer Jr. from the TCM movies. The horrific Leatherface mask was stitched together from the skin of the killer's victims, who are usually captured after they stop at a gas station run by the cannibalistic Sawyer family. This includes Bubba's brother, Drayton "Cook" Sawyer. Link to: Leatherface Samurai Massacre 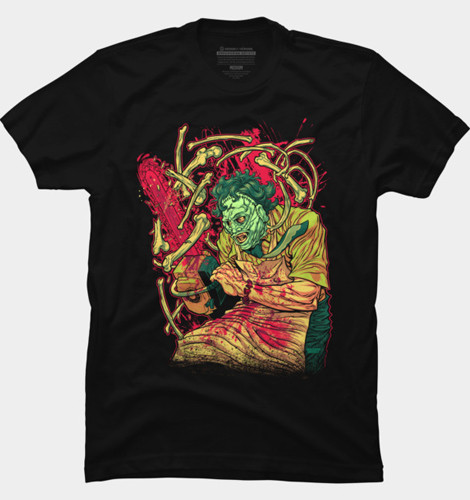 BUY
Massacre t-shirt
Description: This Leatherface t-shirt features the horror villain massacring some fresh meat and bones. Wear it as you watch the original movie or any of the sequels, including The Texas Chainsaw Massacre: The Beginning. The design on the front celebrates his skill with a chainsaw. You should see his ice sculptures that he makes from frozen blood. Wear this Bubba Sawyer tee with your Texas Chainsaw Massacre costume or TCM hat. Link to: Massacre 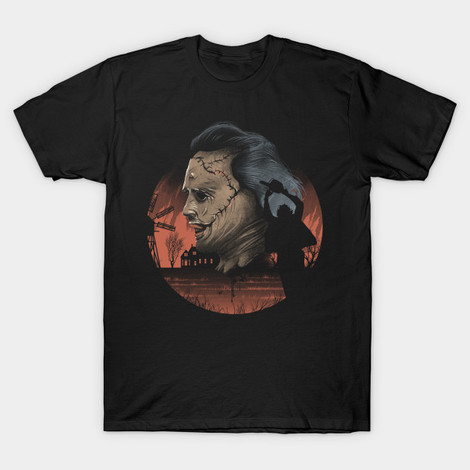 BUY
Texas Cannibal tee
Description: Let everybody know that you are a member of Bubba Sawyer Jr.'s (Leatherface) family. The design on the fronts of these Texas Chainsaw Massacre t-shirts feature the villain wearing his sewn together mask of human skin. Put this shirt on and tell your friends about your crazy cannibalistic family, or wear it to the Last Chance Gas Station run by Bubba's brother Drayton. Tell them about your brothers The Hitchhiker, Chop Top, and Drayton. Collect movie characters in the form of Texas Chainsaw Massacre toys. Link to: Texas Cannibal 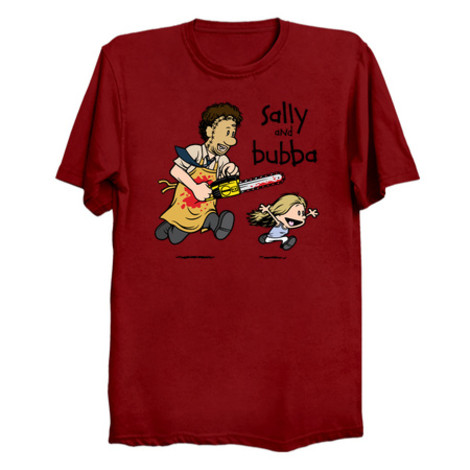 BUY
Sally and Bubba tee
Description: The Calvin and Hobbes cartoon style design on these Leatherface t-shirts displays the mad character wielding a bloody chainsaw walking behind Sally Hardesty. His face is covered in a mask of human skin. The killer's bloodshot eyes are hidden within the dark circles created by his mask of human flesh. Running after his next victim, the movie character has his mouth open as he lifts his weapon into the air. His tan apron has a fresh bloodstain on it and his tie is slung over his shoulder as he runs. His outfit is a sign that he takes his work seriously. Link to: Sally and Bubba 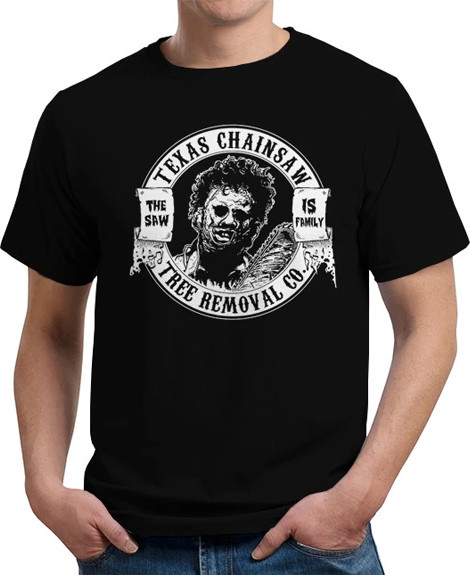 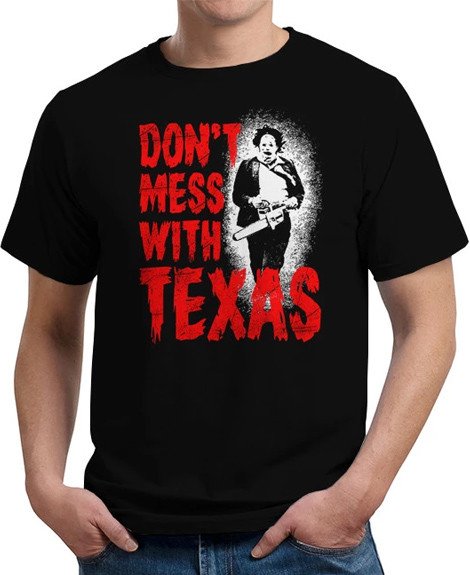 BUY
Don't Mess With Texas t-shirt
Description: This Don't Mess With Texas Leatherface t-shirt displays a silhouette of the maniac next to the phrase, "Don't mess with Texas." Wear the design to watch classic installments from the series, including the movie The Texas Chainsaw Massacre: The Beginning. Leatherface might let you live if he encounters you in this piece of apparel. He is holding a chainsaw in his hands and a mask of human skin covers his face. Link to: Don't Mess With Texas 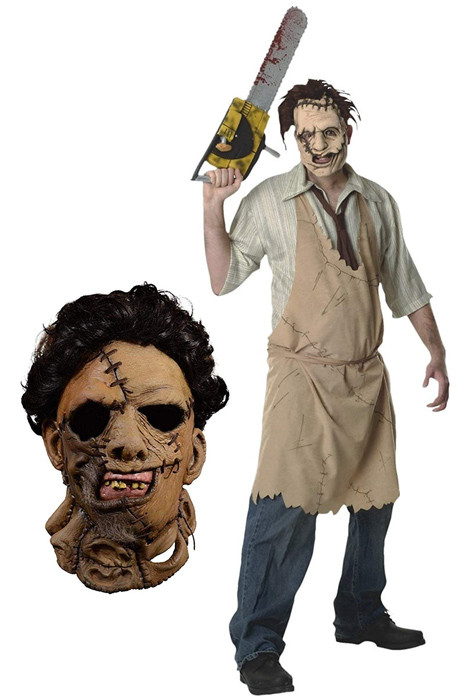 BUY
Leatherface Costumes, Masks and Props
Description: There are a ton of scary Halloween options to choose from nowadays but this Texas Chainsaw Massacre costume has to make the list at least once in your lifetime. This is a horror movie classic that everyone can appreciate. Here you'll find Leatherface masks, costumes and chainsaws that will scare the heck out of anyone you come across. Rev those chainsaws up and get to scaring! Link to: Leatherface Costumes, Masks and Props