After playing the title character in a school play, Walt Disney had a special place in his heart for J. M. Barrie's book Peter Pan. He planned to release the Peter Pan movie as his second animated film, but it was put on hold until more progress was made in the field, so it could be done as he always imagined. In 1953, the story of the boy who never grew up debuted and is now a childhood classic. If you always dreamed of living in Neverland with the Lost Boys, then fly through our gallery of Peter Pan clothing including Peter Pan t-shirts like the Tinkerbell shirt. To make the dream a reality, check out the Peter Pan costumes which also include Captain Hook costumes and Disney Tinkerbell costumes for all ages.
To buy a T-Shirt, click the image or link for store and size information. 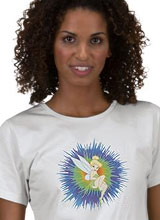 No one will miss you if you are wearing this Peter Pan shirt featuring Tinkerbell. It is almost as colorful as her bubbly personality and it will definitely catch people's eyes. Whether Tink is your favorite pixie or not doesn't really matter because she will always be Peter's trusty sidekick. Not only does she sprinkle fairy dust on people so they can fly, she tries to look out for Peter's best interest. While not everything works out as planned, Peter Pan and the Lost Boys appreciate her anyway. Check out our other Disney Tinkerbell t-shirts below or snag a copy of the Peter Pan movie to rekindle some great memories. Link to: Color Burst Tinkerbell 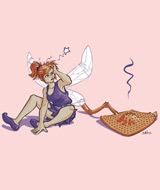 This design reveals one of the many hazards of being a sprite-sized fairy, flyswatters. Tinkerbell can sprinkle pixie dust on anyone or anything to make it fly; that sounds like the magic touch to me. If it weren't for her, then Wendy, Michael and John couldn't have flown to Neverland with Peter for their adventure or have sailed Captain Hook's pirate ship back through the sky to London. If you wish you had a little fairy dust to let you fly away from growing up, then grab this Disney Tinkerbell t-shirt today. Link to: Tinkerbell Flyswatted 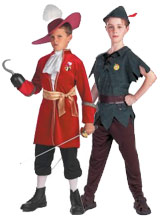 If Peter Pan shirts aren't enough to make you feel like you can fly, then turn your attention to our Disney Peter Pan costumes. Not only is he the object of Wendy Darling's affection, he is also a bona fide hero. For anyone who likes to dress up as more sinister characters, check out the Captain Hook costumes. Not only has Hook made it his life's goal to kill Peter, he also stole the Indian Princess Tiger Lily and tried to drown her. If you are looking for a more girlie outfit, check out the variety of fairy Disney Tinkerbell costumes for babies, girls and adult women that we feature below. Link to: Peter Pan and Captain Hook Costumes 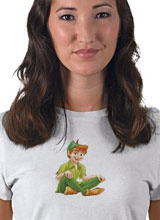 It is the boy who never grew up! This Peter Pan t-shirt features the boy himself, who can take little Wendy Darling's breath away. You can typically find him sword fighting Captain Hook, flirting with mermaids, flying around the world or saving princesses from Skull Rock. Most people envy this character because of his ability to do whatever he wants, whenever he wants. He doesn't have to answer to grownups or spouses, and he has no responsibilities to take into consideration. Sound good to you? Then get in on the action by grabbing any of our Peter Pan tees or Tinkerbell shirts. Link to: Peter Pan Sitting 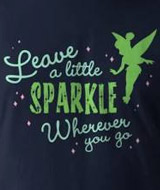 "Leave a little sparkle wherever you go." This Tinkerbell tee will have you believing in fairies all over again. The design on this Peter Pan shirt features J. M. Barrie's memorable Tink letting her own fairy dust sparkle. Pick your clothing color and style. Then let your own fairy dust sparkle by letting your personality shine. Link to: Leave a Little Sparkle Tinkerbell 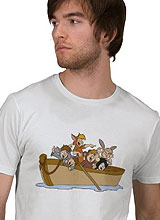 This Peter Pan tee features his brave and loyal Neverland companions, the Lost Boys. Most people don't know his friends' names, so I will fill you in on this nice little piece of trivia. The child dressed as a bear is Curly, the skunk is Tootles, the rabbit is Nibs, the fox is Slightly and the raccoons are twins named Binky and Marmaduke. Furthermore, they all live together in a tree covered with rope nooses called Hangman's Tree. To see or read about it for yourself, snag a Disney Peter Pan DVD or book. Get other Peter Pan merchandise like Tinkerbell dolls and figures. Link to: Lost Boys Peter Pan 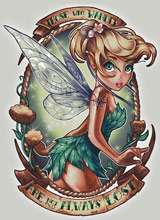 This Peter Pan t-shirt will have you wishing you lived in Neverland near the attractive Tinkerbell. It wasn't always referred to as Neverland though; it was originally called Never Never Land. (Note: If you are currently envisioning a circus style ranch in California, then you are picturing a different place.) I am referencing the one near the "second star to the right and straight on till morning". It is complete with the Mermaid Lagoon, Cannibal Cove, Indian Camp and Skull Rock. Read more about this whimsical destination in the Peter Pan books. Link to: Tinkerbell 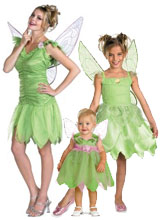 There isn't a woman out there who doesn't love Tink, so we are happy to offer baby, child, teen and adult fairy Tinkerbell costumes. It doesn't matter if it is for a daily game of dress up, trick-or-treating, a party, or handing out candy, you just can't go wrong. People love Disney characters and fairies too, so compliments will be abound. Any of these could also easily be paired off with a Peter Pan costume or Disney Captain Hook costume for a perfect couple's costume. To feel the magic any day of the week, keep perusing this clothing gallery that includes Peter Pan t-shirts and Tinkerbell tees. Link to: Tinkerbell Costumes 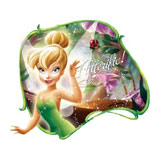 You may think of Tink as a friendly fairy, but what you might not remember is that she gets jealous and tries to have the Lost Boys kill Wendy! Peter Pan arrives in the nick of time and banishes Tink. If you want to remember the nicer side of Tinkerbell then this Disney Peter Pan shirt is for you. It features her more pleasant side. Don't miss the Peter Pan action figures and Tinkerbell doll below. Link to: Flitterific Tinkerbell 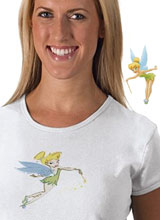 As you can see on the Peter Pan DVD, Tinkerbell can be a bit on the sassy side. It is her way or no way, at least until Peter intervenes and puts her in her place. Either way, this Peter Pan t-shirt featuring our favorite feisty fairy will put a smile on your face. Look, even Tink approves of the tee! For other smile inducing Peter Pan tees and Tinkerbell t-shirts, keep browsing this gallery of Peter Pan clothing. Be sure to take a minute and look at the other entertaining Peter Pan merchandise like Peter Pan costumes, dolls and toys. Link to: Sassy Tinkerbell 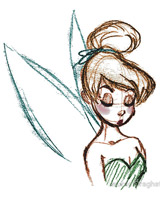 This sketch style Peter Pan tee featuring Tink is available in a variety of styles and colors for men, women and children. You can have it any way you like it, so pick your favorite look. The sketch style perfectly breaths the whimsy of Pan's world into this piece of Tinkerbell clothing. Get this design or check out the other Peter Pan shirts. Link to: Sketch Tinkerbell 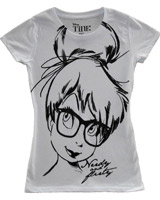 It appears that the occasionally mischievous Tinkerbell is at it again. Perhaps if Nana had helped raise her like she did Wendy, John and Michael, then she would be a bit more even tempered. If you like the pixie despite her unpredictable nature then you'll love this Disney Tinkerbell tee. She is showing her feisty attitude but looks adorable as usual. No wonder Peter and the Lost Boys let her hang around all the time. Don't miss out on the Disney Peter Pan costumes and Captain Hook outfit either. Link to: Tinkerbell Hipster 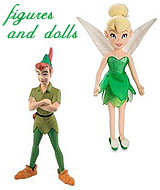 Create your own Neverland with these Peter Pan action figures and Tinkerbell toy dolls. Other figures include Wendy, the Crocodile, Mr. Smee, the Indian Chief and the popular Captain Hook figure. Accessories include treasure chests, the pirate ship and other settings from the movie. Get them for a child or collect them for yourself to prove that you'll never grow old. Link to: Peter Pan Action Figures and Tinkerbell Dolls