The Saw movie horror series began in 2004, with a sequel released every year since. The Saw movies follow a killer named Jigsaw (Tobin Bell), determined to rehabilitate his sinful victims through tortuous games that test their desire to live. If they pass the test, they live with a newfound respect for life, and if they fail, they die. As his health deteriorates, Jigsaw recruits a former player named Amanda (Shawnee Smith) to carry on his mission but she perishes as well. You would think that is the end but it is just the beginning. Get your killer Saw memorabilia, including Saw t-shirts, Saw Jigsaw costumes, masks, puppet outfits & more.
To buy a T-Shirt, click the image or link for store and size information. 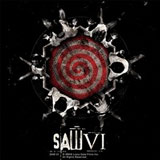 If Saw 6 has your blood racing, then hop on the carousel with this classic black Saw t-shirt. It is sure to set your mind spinning and catch the attention of your friends. Despite the deaths of Jigsaw and his protégé Amanda, his twisted tests continue to unfold. He soon finds another disciple to do his bidding. Wear this Saw VI tee as you play in your pig mask with your Jigsaw puppet and dolls. Link to: Saw 6 Carousel 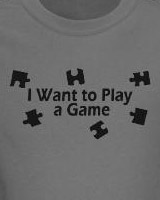 Saw I Want to Play a Game t-shirt

The Saw Jigsaw quote "I want to play a game" has become one of the most recognizable lines in horror movie history. The killer Jigsaw uses the quote when he's talking to his unwilling participants just before he introduces his next deadly challenge. Whether it's a skull crushing device, a jawbreaker or a deadly pendulum, this tee will remind fans of the various games that the captives have been forced to play. Which challenge did you find to be the most terrifying? Link to: Saw I Want to Play a Game 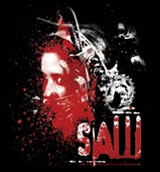 The first Saw movie dragged viewers deep into an abandoned bathroom to watch the agony of two men immersed in a killer's game. The shackled pair, played by Leigh Whannell and Cary Elwes, try to outwit their keeper, not knowing he is also in the room. We learn that this is not his first endeavor into rehabilitation. An addict named Amanda has already survived a game. Pair this Saw tee featuring Amanda's bear trap test with the Saw Jigsaw t-shirt. Link to: Saw Movie 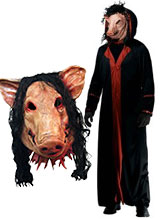 If you are looking for a Saw costume that will be the envy of all your friends, then you have come to the right place. This is not someone you want to see lurking in the shadows. The Saw pig mask with long black hair matched with the long black and red hooded cloak is sure to scare anyone. This Saw pig costume, while worn by both Jigsaw (Tobin Bell) and his protégé Amanda (Shawnee Smith), was mainly used as a disguise for Amanda to kidnap his victims. If this is a little too creepy for you, be sure to check out the Saw Jigsaw costume that is also featured in the gallery. Either one is sure to impress. Link to: Saw Pig Costume 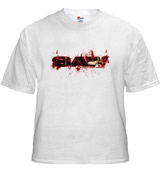 Saw 6 is another amazing addition to the series. After dragging you to the edge of your seat, you are left wanting more, but aren't you always with the Saw movies? Grab this Saw t-shirt to let everyone know that these horror movies do not let you down. If you want more memorabilia, be sure to check out the Saw puppet costumes, movie soundtracks, posters and video games. They will definitely please any horror fan, whether it is for yourself or a friend. Link to: Saw Movie Logo 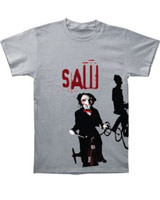 This Jigsaw Tricycle shirt shows the fun side of the killer. However, if you enjoy watching Jigsaw helpless and in pain like his victims usually are, then Saw 3 was probably your favorite Saw movie. As he struggles for his life, his skull is drilled wide open with power tools in hopes of keeping him alive just long enough to see his game finish. With Jigsaw keeping secrets, it ends not only in his death but in deaths of others. Pair it with the other Saw Jigsaw t-shirt that also displays the killer's puppet. Link to: Jigsaw Tricycle 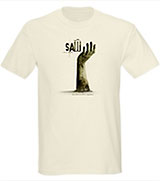 Just when you thought it was all over, you were wrong. Although Jigsaw and his apprentice Amanda have perished, their games continue. Saw 4 begins with John Kramer's autopsy and the discovery of a microcassette sealed in his stomach, warning of future targets. The officers who originally sought him out soon find him too close for comfort. Remember what life is all about with these helping hand Saw t-shirts. Wear the tees with Saw masks. Link to: Saw 4 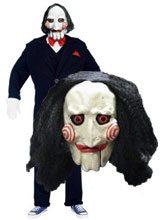 I want to play a game...and apparently so do you. Fans of the movies know that this Saw costume is sure to stir up some fright. The surprisingly successful Saw movies have not lost their touch, with new ones continuing to have record breaking releases. Snatch up this Saw Jigsaw Puppet Costume and master your cackle under the Jigsaw mask to create the perfect costume. Not only did this character give directions to the horrific games, he was always the bearer of bad news for players. Pay tribute to this new horror classic by nabbing your Jigsaw costume before the game is over. Link to: Saw Puppet Costume 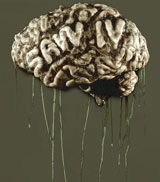 In Saw 4, Jigsaw encourages Lieutenant Rigg (Lyriq Bent) to "See what I see. Feel what I feel. Save as I save." in an effort to drastically alter his perspective on life and recruit him into a life of tortuous rehabilitation. Only a twisted mind could come up with these tests of death designed to implicate no one. This brain tee is available in a variety of colors and styles for any personality. Grab some Saw t-shirts for yourself and your Jigsaw puppet today. Link to: Saw 4 Brain 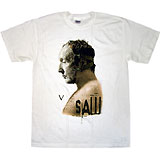 If Saw 5 was your favorite movie, then this Jigsaw t-shirt has your name written all over it. It features actor Tobin Bell's face being used as a mask to cover the identity of the real killer. If you want to know who is killing now, you have to watch the movies. Be sure to pick up the killer Saw movie merchandise like soundtracks, Saw dolls and film posters. They are to die for. Link to: Saw Tobin Bell Mask