Roughly two years after their legendary trip to Vegas for Doug's bachelor party, Phil, Stu and Alan reunite in The Hangover Part 2 movie. This time they head to Thailand for Stu's wedding. After enjoying beer and marshmallows on the beach the night before the wedding, they wake to find themselves hung over and lost in Bangkok where Stu's fiancée's brother Teddy appears to have gone missing. If you enjoyed watching their ensuing adventure, get one of these Hangover 2 t-shirts like the White Lion t-shirt, Albino Polar Bear tee, Dealer Monkey or Address Me as Captain shirt. Just remember to roofie proof your drinks against Alan Garner.
To buy a T-Shirt, click the image or link for store and size information. 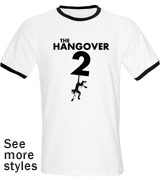 Celebrate The Hangover sequel with this logo design that features the movie's monkey hanging from the number 2. Perhaps this design will help to jog your memory the next time you misplace one of your friends, just like Phil, Stu and Alan do with Teddy in The Hangover 2 movie. In addition to the ringer T shown here, this logo design is available on a variety of other clothing and merchandise, including plain white tees, hoodies and mugs. Link to: The Hangover 2 Logo 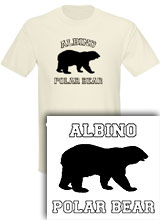 When you get your wolfpack together around a bonfire you never know exactly what topics will come up or what stories will come out. Alan had quite a tale for the rest of the gang in the movie Hangover 2. He spoke in amazement of how his uncle had seen an albino polar bear, only for Stu to question how he would know considering polar bears are white. Alan matter-of-factly stated because it was black. Catch an albino polar bear yourself by getting this Hangover 2 tee. You sure it wasn't a black bear? Link to: Albino Polar Bear Hangover 2 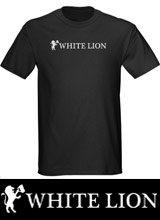 After Phil, Stu and Alan discover that the "Teddy" who turned up at the police station is an elderly Buddhist monk and not the 16-year-old Teddy they are looking for, they eventually head to the White Lion night club where they question the owner and a dancer, the latter of whom sheds some embarrassing light on the previous night's events, at least with regard to Stu. Next to the White Lion bar is Lou's Tattoo Parlor, where they see footage of the riot and destruction they caused. This White Lion shirt features the logo for the bar / night club. Link to: White Lion Hangover 2 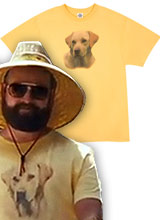 We've all seen people who wear dog shirts. You know the type. Alan Garner doesn't quite fit that mold. Instead, he makes this Yellow Labrador shirt from the movie Hangover 2 cool. After the film's trailer was released, Alan's dog tee quickly became the most popular clothing item from the movie. It features the same dog that we see him making out with in the driveway at the beginning of the first film. There's nothing wrong with showing your appreciation for man's best friend, or Alan's. Link to: Yellow Labrador from The Hangover 2 Movie 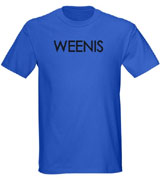 This Hangover Weenis t-shirt was designed with Alan fans in mind since he uses the term quite often. In the first film, he uses it when referring to Carlos at the table saying, "He's jackin' his little weenis." In the second he claims, "When a monkey nibbles on a weenis, it is funny in any language." He delivers the quote after playing a joke on a bus. The design is also done in the same style of lettering as the movie logo for a nice added touch. Link to: Hangover Weenis 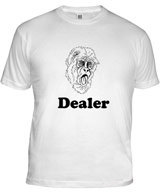 When Alan Garner, Stu Price and Phil Wenneck unexpectedly wake up in a Bangkok hotel room, they discover their old acquaintance Leslie Chow (Ken Jeong), as well as a monkey wearing a cut off jean jacket with a Rolling Stones band logo on the back. Later on, they find out that the cigarette smoking monkey deals drugs for the Russian mob. The dealer monkey appears on the front of this t-shirt along with his professional title. Link to: Hangover 2 Dealer Monkey 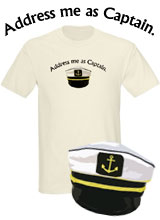 Address me as Captain Hangover 2 t-shirt

You might want to call Alan a lot of things but he prefers that you address him as captain. He made the request while taking the wheel of Mr. Leslie Chow's boat, Perfect Life, to race back to the resort from Bangkok for Stu's wedding. Apparently he is an expert because he grew up in a yacht club. He did pretty well until it was time to stop the boat. Don't run aground like Alan does; get yourself a Hangover Address Me As Captain t-shirt today. Link to: Address me as Captain Hangover 2 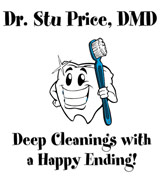 If you're looking for deep cleanings with a happy ending, then Dr. Stu Price, DMD is your man, even if his fiancée's father doesn't consider dentists "real doctors". He takes pride in his profession and he even cleans his friend Phil's teeth for free, despite Phil begging for a hit of nitrous and trying to steal his prescription pad. This Dr. Stu Price dentist t-shirt advertises his business with his quote, "Deep cleanings with a happy ending!" Link to: The Hangover 2 Stu 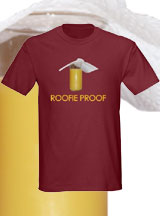 Vegas may have seemed like a trip Stu, Phil, Alan and Doug would want to remember, but apparently it really scarred Stu. "Do you see that? That's orange juice with a napkin on top so nobody roofies me." That's right. He has taken to roofie proofing his drinks even at the local IHOP with his friends. He is completely satisfied with his breakfast being his bachelor party. His plan goes well until the unexpected happens. He was prepared for his drinks to be spiked but not his marshmallows. Expect the unexpected in this Hangover quote t-shirt. Link to: Hangover 2 Roofie Proof 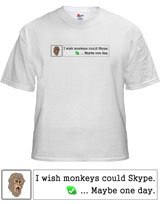 I Wish Monkeys Could Skype t-shirt

After Alan's denim wearing monkey friend gets shot, he drives the little guy to the animal hospital and leaves him in a basket on the doorstep. Before he leaves, he remarks, "I wish monkeys could Skype. ... Maybe one day." The quote offered a heartfelt moment of comic ingenuity that is being repeated by Hangover 2 fans. Pair this clothing item with a Dealer Monkey t-shirt for the perfect primate combination. Maybe one day you'll have a Monkey friend like Alan's who you'll be able to talk to on Skype. Link to: I Wish Monkeys Could Skype 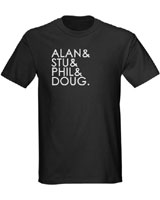 Sometimes plain and simple is exactly what the shopper ordered. This Hangover Wolfpack shirt features the names of its members including bearded oddball Alan, glasses clad dentist Stu, wild child school teacher Phil and down to earth Doug. Whether you prefer the original or the sequel, this tee has all the bases covered and is available for men, women and children. If you are looking to put a little fun and excitement into your life, check out the temporary Stu tattoo. It's perfect for a Stu costume. Link to: Hangover Wolfpack Names 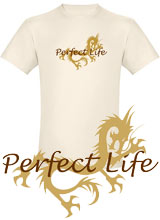 This design displays a logo representing the one seen on Leslie Chow's boat Perfect Life. The t-shirt features the exact text and a re-imagined brown dragon with characteristics that are similar to those visible on the exterior of Chow's boat. When your wearing this tee be sure to tell everyone, "Please address me as Captain." Unlike Alan, just make sure to slow down before you run aground in the middle of Stu's wedding ceremony. His fiancée's father wouldn't appreciate that. Pair it with a White Lion shirt for the bar from the movie. Link to: Hangover 2 Boat Perfect Life 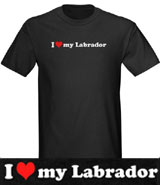 Alan I Heart My Labrador Hangover 2

The I Heart My Labrador shirt design shown here was inspired by Alan's computer sticker and love for his faithful friend. His gold Lab means so much to him that he had a yellow shirt made with a picture of his dog on it that he wears throughout the Hangover 2 movie. If you love your Labrador as much as Alan loves his then snag this tee today. It is available in classic black or a variety of colors to suit your needs. Link to: Alan I Heart My Labrador Hangover 2 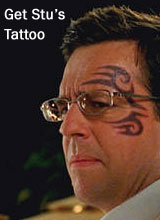 Create the ultimate Stu Hangover 2 costume with a fake tattoo version of his facial artwork. It's perfect for Halloween costume parties or simply to let everyone know that, like Stu, there is a little demon lurking inside of you too. Hey, let's face it, it's better to get this Mike Tyson Hangover temporary tattoo than to unexpectedly wake up in a Bangkok hotel room and discover that you have been inked with the permanent version of the tribal design. Even Stu Price would have probably preferred this fake replica. Link to: Hangover 2 Stu Tattoo - Temporary Mike Tyson Tattoo