Directed by Jared Hess, the Napoleon Dynamite movie tells the story of a teenager named Napoleon, whose uncle comes to stay with he and his brother after their grandmother breaks her tailbone riding an ATV. Uncle Rico's presence has a chaotic effect on their lives, nearly ruining Napoleon's relationship with his new friend Deb. Below, we present a selection of flippin' sweet Napoleon Dynamite t-shirts that includes the familiar Vote for Pedro t-shirt, inspired by Pedro's campaign to become class president. Other tees include the Napoleon Dynamite Liger shirt and the gimme some tots tee. Celebrate the movie that made moon boots and tetherball cool again. Also, browse additional merchandise, such as Napoleon Dynamite costumes, wigs, moon boots, hats and other apparel.
To buy a T-Shirt, click the image or link for store and size information. 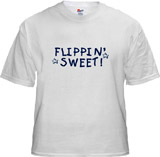 The word 'flip' is a euphemism that Napoleon uses in place of a much harsher four-letter word. For example, after he learns that his grandma has been injured on an ATV he says, "What the flip was Grandma doing at the sand dunes?" Steer clear of profanity with this Flippin' Sweet Napoleon Dynamite t-shirt, a reflection on the culture of Preston, Idaho. Link to: Flippin' Sweet! Napoleon Dynamite 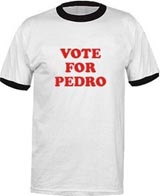 Pedro Sanchez is new to Preston High, but he's wasting no time in campaigning for Student Body President. You can show your support with this Vote for Pedro t-shirt that is available here as an affordable ringer T. Pedro is running against Summer Wheatly (Haylie Duff), your typical popular, blond elitist. Pedro campaigns with the promise, "Vote for me, and all your wildest dreams will come true." Wear this tee with your wig, glasses, and moon boots for a complete Napoleon Dynamite costume. Link to: Vote for Pedro 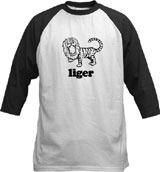 These liger Napoleon Dynamite t-shirts feature an image of Napoleon's favorite animal, the liger. In the movie, Deb questions him about the animal after she sees him drawing one in his notebook. He explains to her, a liger is "like a lion and a tiger mixed... bred for its skills in magic." The design on these liger shirts features an image of the animal roaring, complete with a mane and diffuse stripes. Link to: Liger 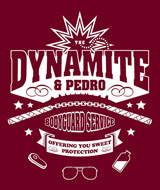 This Napoleon and Pedro Bodyguard Services t-shirt advertises their new business venture. With the help of Pedro's cousins, they will offer you their protection provided that you vote for Pedro. Are you tired of getting picked on? The Dynamite and Pedro will offer you sweet protection. Gone are the days when bullies try to steal your bike and smash your tots. Link to: Napoleon & Pedro Bodyguard Services 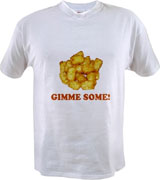 Gimme Some of Your Tots t-shirt

This white Napoleon Dynamite t-shirt features the phrase, "Gimme some!" printed on the front of the tee, beneath an image of a pile of Tator Tots (a.k.a. Tots). This is in reference to a scene in the movie where Randy, the school bully, tells Napoleon to give him some Tots. After being told to go find his own, Randy kicks Napoleon's pocket, smashing the Tots. The design on this piece of Napoleon Dynamite merchandise is also available on hats. Link to: Gimme Some of Your Tots 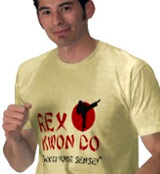 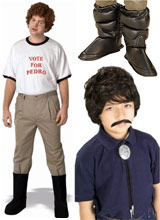 Opt for a complete Napoleon Dynamite outfit or build your own costume with accessories like glasses, wigs and Napoleon moon boots. Choose between the Vote for Pedro costume with matching tee or his more formal outfit that includes a brown jacket with attached vest and light blue tie. Kip and Pedro costumes and accessories are also available but in limited quantities. Link to: Napoleon Dynamite Costumes, Moon Boots and Wigs 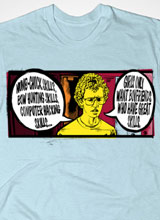 The design on the front of this black Napoleon Dynamite t-shirt lets everybody know that you've got great skills, including nunchuck skills, cagefighting skills, bowstaff skills and computer hacking skills. In the middle of the chest is Napoleon listing off the great skills that girlfriends want in a boyfriend. Use the funny Napoleon Dynamite quote that inspired this tee the next time your friends ask for dating advice. Tell them, "Girls like guys with great skills." This tee is the perfect gift to give with the Vote for Pedro t-shirt, which will guarantee that Pedro offers you protection. Link to: Napoleon Skills 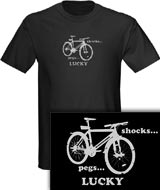 This funny Napoleon Dynamite tee features a gray image of Pedro's bike, the Sledgehammer. The name of the bike can be seen on the diagonal part of the frame. Around the bike is the quote Napoleon uses to describe Pedro's two-wheeler. He stares at the bike and says, "Shocks... pegs... Lucky." He then asks Pedro, "You ever take it off any sweet jumps?" This Napoleon Dynamite merchandise item is perfect for fans of the Jon Heder movie or biking. Link to: shocks... pegs... LUCKY 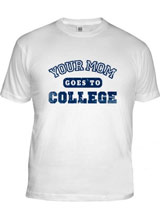 Your Mom Goes to College t-shirt

"Your mom goes to college." Tell it like it is with Kip's quote from Napoleon Dynamite. Pair this funny tee with Napoleon Dynamite Liger shirts, which feature the word "LIGER" and an image of the animal. In the movie, Napoleon describes a liger by saying, "It's like a lion and a tiger mixed... bred for its skills in magic." The flippin' sweet liger tees are available in a variety of colors and styles, including both men's, women's and kids. Wear this design with Napoleon Dynamite hats, boxer shorts, sweatshirts and hoodies. Link to: Your Mom Goes to College 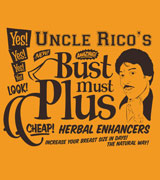 Uncle Rico's Bust Must Plus tee

"Back in '82, I used to be able to throw a pigskin a quarter mile," Uncle Rico tells Kip (Aaron Ruell) in the movie. Not only does Uncle Rico love football, this Napoleon Dynamite t-shirt reveals his passion to help women. This shirt features a design promoting the Bust Must Plus herbal breast enhancers. The design on the front of this tee will catch people's eyes and hopefully make them want to learn more about increasing their breast size the natural way. Link to: Uncle Rico's Bust Must Plus 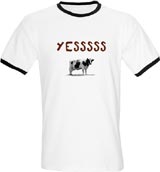 These YESSSSS Napoleon Dynamite t-shirts feature an image of a cow underneath Napoleon's catchphrase, "YESSSSS." In the movie, Napoleon delivers this line at an FFA milk-tasting contest. After drinking from one of the glasses of milk, he says, "This tastes like the cow got into an onion patch." The judge tells him that he is correct, to which he replies, "Yesssss." Link to: YESSSSS Napoleon Dynamite 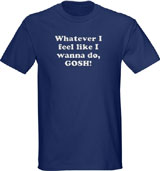 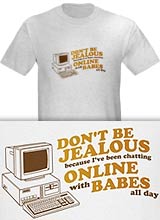 I've Been Chatting Online With Babes All Day t-shirt