The Cosby Show TV series ran for eight seasons and followed the lives of a professional couple raising five children. The show starred Bill Cosby as obstetrician Cliff Huxtable and Phylicia Rashad as his lawyer wife Clair. Their brood included Sabrina LeBeauf as their eldest daughter Sondra, Lisa Bonet as unpredictable Denise, Malcolm Jamal-Warner as only son Theo, Tempestt Bledsoe as intelligent Vanessa and Keshia Knight Pulliam as loveable little Rudy. If you admired this role model family, peruse our collection of Cosby Show t-shirts including the Hillman College tee, Gordon Gartrelle shirt and Bill Cosby sweaters.
To buy a T-Shirt, click the image or link for store and size information. 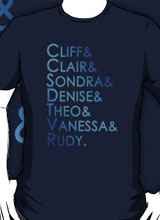 Many fans dream of being a part of the Huxtable family and most have a favorite character who they like to watch? Who is yours? Do you like comedian father Cliff or comforting disciplinarian Clair? Perhaps you prefer their successful eldest Sondra, trying son Theo, lesson learner Vanessa or feisty little Rudy? It is hard to choose because they are all very different, so we aren't going to make you. This Cosby tee highlights all the members of this family friendly eighties TV show. Link to: Huxtable Names 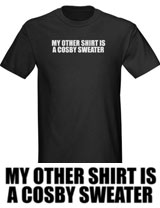 My Other Shirt is a Cosby Sweater

If you have nothing but love for the The Coz and his Coogi sweaters then this Cosby Show shirt is right up your alley. It will remind you of the good times eating bacon burger dogs, lip-synching old tunes to the grandparents and dancing around to the greatest elevator music I've ever heard. Another notable piece of clothing on the show was Theo's Gordon Gartrelle shirt. Be sure to check out our tee version of the infamous Gordon Gartrelle original. Link to: My Other is a Cosby Sweater 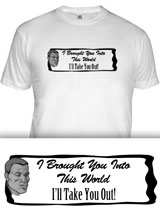 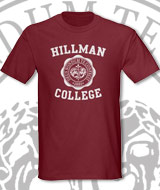 Grandpa Huxtable, Heathcliff, Clair and Denise could all wear this Hillman College shirt with pride and now you can too. As shown by Denise, you don't have to be an alum to promote it. Her short-lived, yet amusing college experiences were seen on The Cosby Show spinoff, A Different World. Although it wasn't a fit for her, it did manage to produce some top notch professionals who went on to raise one heck of a family. Let's go Hillman, let's go! The college is home to track star Combustible Huxtable. Link to: Hillman College 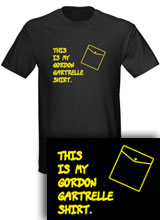 This Gordon Gartrelle t-shirt gives Denise's creative interpretation a run for its money. If you recall, Theo bought an original yellow and black GG with hidden buttons, a flap on the back, and two-tone pockets for his date with Christine. Unfortunately, when his parents find out he paid $95 for a Gordon Gartrelle original, he is forced to hand it over. Denise offers up her services as a novice seamstress to create a look-a-like. When it comes to the final hour, he finds out that things did not go smoothly. Luckily, his date still wants to go out with him and all is well as he introduces Denise as the true creator. Link to: Gordon Gartrelle 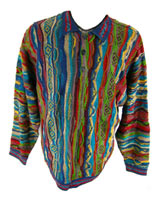 As a fan, you know that Dr. Huxtable typically wore either college sweatshirts or Cosby sweaters. Most of the latter were brightly colored Coogi sweaters like the ones available here. Not only can they be worn for fun and warmth, but they are also ideal for an eighties theme party, an ugly sweater party or as a jaw-dropping Bill Cosby costume at Halloween. People will love the original idea. Don't miss the Hillman College t-shirt for another great option. Link to: Bill Cosby Sweater - Cliff Huxtable Coogi Sweaters 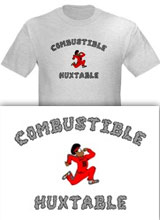 When it comes to track and field, there was no one quite like Cliff who earned himself the nickname Combustible Huxtable. Although he still believes he's in shape, he couldn't be more wrong. When he decides to compete with Sanford Tailwind Turner, he discovers just how rusty he is. If you enjoyed watching him struggle to the finish line, grab some of The Cosby Show shirts like this Combustible Huxtable t-shirt featuring Cliff in a track uniform complete with an 'H' for Hillman on the front. Be careful not to let others like Tailwind Turner run away with them first. Link to: Combustible Huxtable 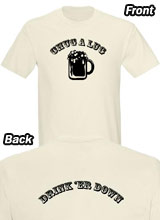 What happens when you can't stand up to peer pressure? If you are playing the alphabet drinking game, you get drunk. Vanessa learned that the hard way when she was at her friend's house chug a lugging alcohol after failing to remember city names during the game. Although she was smart enough not to drive, she was unable to hide her inebriation from her family. Get this Cosby shirt featuring the lines "Chug a Lug" and "Drink 'Er Down" that her parents and Rudy chanted while teaching her a much needed lesson. Not to worry, it was just tea. Link to: Chug a Lug Cosby 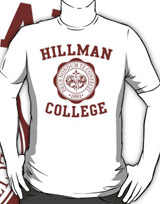 When it comes to education, show that you're following the tradition of the Huxtable family. This Hillman sweatshirt promotes the alma mater of Clair and Cliff Huxtable, in addition to Cliff's father Russell, aka Grandpa Huxtable. Also available in navy or black with a white Hillman College logo, this sweatshirt is perfect for chilly days on campus or cool afternoons around the house. Tell your friends that you used to run with the one and only Combustible Huxtable, the university's track star, at least in his mind anyway. Link to: Hillman College Sweatshirt or 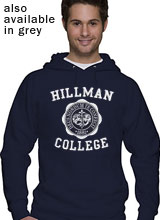 Stay warm in this comfortable Cosby Hillman hoodie that displays the university's seal on the front. The logo was meticulously recreated to resemble the college seal seen on the spinoff TV show A Different World. In addition to navy blue or black hoodies with a white design, the logo can also be purchased in maroon on white or ash grey. Stay cozy while supporting Cliff Huxtable's alama mater. For a complete ensemble that would make him proud, wear it over one of The Cosby Show t-shirts available in the gallery. Link to: Hillman College Hoodie