Known as the first cult movie of the internet age, The Big Lebowski tells the story of a slacker named Jeffrey "The Dude" Lebowski, who finds himself confronted by the twisted characters of a supposed kidnapping plot. The movie initially tanked at the box office, but over the years, movie quotes from The Big Lebowski spread across the internet. They eventually landed on the fronts of Big Lebowski t-shirts, which have helped to raise awareness and introduce the movie to a whole new generation of Little Lebowski Urban Achievers. Roll on Shabbos wearing the Big Lebowski bowling shirt on display below, or take out your lady friend in a The Dude Abides Big Lebowski t-shirt. Also see Jesus Quintana costumes below.
To buy a T-Shirt, click the image or link for store and size information. 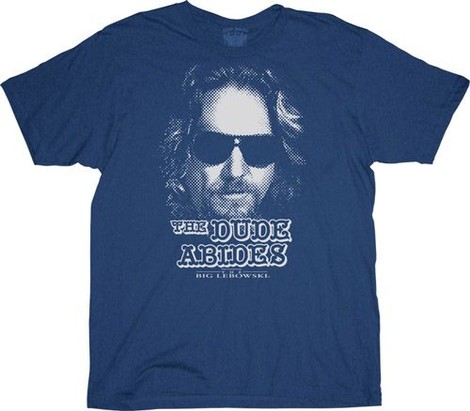 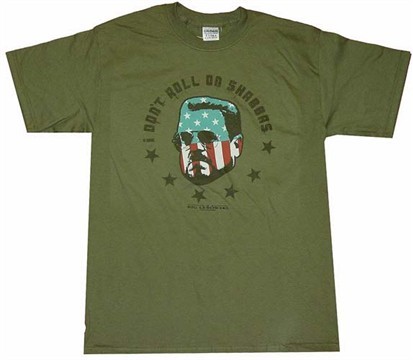 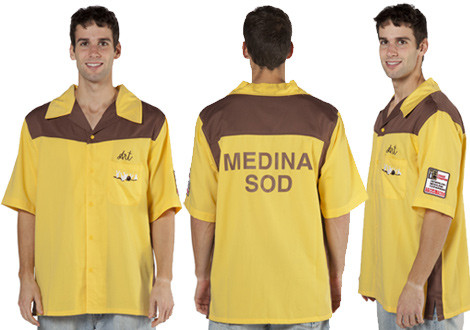 BUY
Authentic Big Lebowski Bowling Shirt Replica
Description: This authentic replica jersey is great for costume parties or a night out bowling. The back of this Big Lebowski bowling shirt reads, "Medina Sod," while the front is identical to the look of the team's bowling shirts from the movie. Buy them for your own team and tell everybody that you beat Jesus Quintana. Just remember to remind the league that under no circumstances do you ever bowl on Shabbas. They'll have to reschedule. Link to: Authentic Big Lebowski Bowling Replica 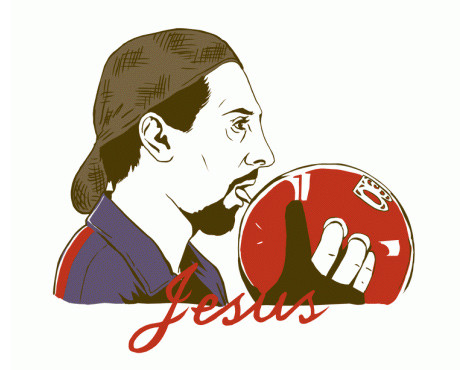 BUY
Jesus Quintana tee
Description: The front of this Big Lebowski t-shirt celebrates the legend that is Jesus Quintana, the eccentric, Latino, trash-talking bowler who is scheduled to compete against The Dude and Walter's team in the league semifinals match. Jesus confronts the team several times before the match, reminding them that nobody messes with the Jesus. In one of the most memorable shots from the movie, Jesus holds his ball to his face and gently licks its polished surface. Then, after methodically bowling a strike, he does a victory dance a la Muhammad Ali. Link to: Jesus Quintana 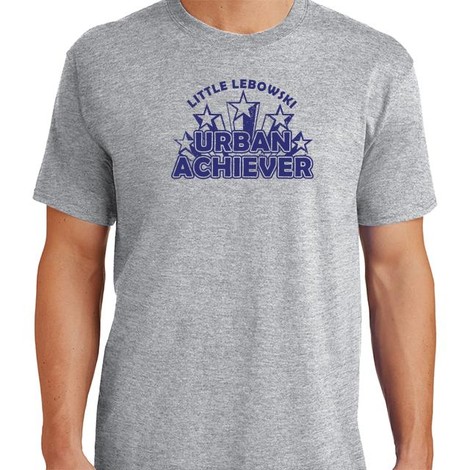 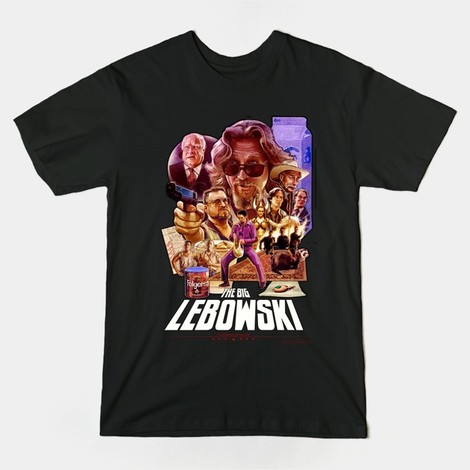 BUY
The Dude Collage tee
Description: Your inner Dude will abide when you're wearing this cool El Duderino collage tee. Pair this bestselling tee with a Big Lebowski The Dude Abides t-shirt for the perfect slacker gift. The collage features The Dude, Walter, Jesus, Lenny and other memorable characters. El Duderino is symbolic of the pacifist slackers who keep our society floating along on a level plain, not necessarily progressing or regressing in any one direction. Everyone knows someone like El Duderino. Order this Big Lebowski tee for The Dude in your life. Link to: The Dude Collage 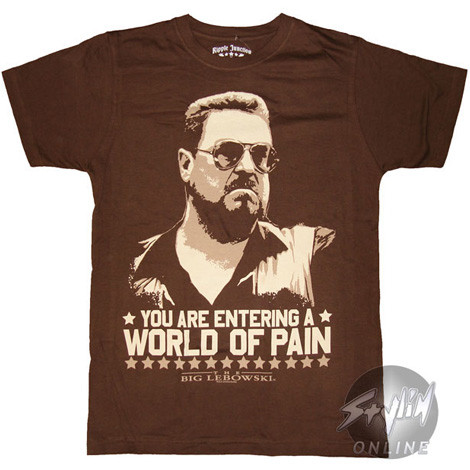 BUY
You are Entering a World of Pain
Description: The front of this chocolate colored tee features the Walter Sobchak (John Goodman) quote from the Big Lebowski, "You are entering a world of pain." An image of Walter is visible above the memorable Big Lebowski movie quote. Walter delivers the line after a bowler from the opposing team refuses to accept Walter's accusations that he went over the line. Wear this bestselling Big Lebowski t-shirt to pay homage to Vietnam Veteran Walter Sobchak. Combine it with a Big Lebowski bowling shirt (available in the gallery) for the ultimate gift. Link to: You are Entering a World of Pain 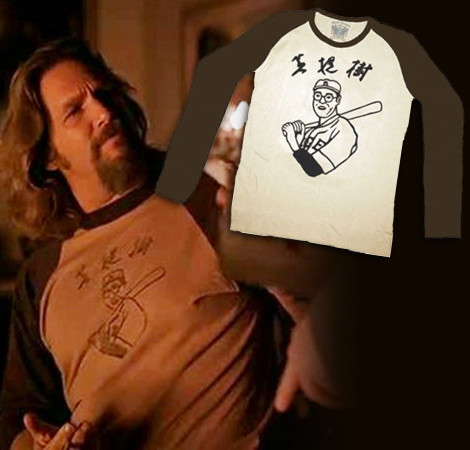 BUY
Big Lebowski Kaoru Betto Baseball Jersey
Description: This baseball jersey is nearly identical to the one The Dude wears in the movie. Choose from a variety of colors, including black sleeves on a white jersey. The man on the tee is Japanese baseball player Kaoru Betto, who was one of the first Japanese power hitters. He played for the Osaka Tigers in the late 1940s and became known as "The Gentleman of Baseball." The design's Japanese characters loosely translate to "Strongly Influential." The Kaoru Betto t-shirt worn in the movie actually belongs to Jeff Bridges. He also wore it in The Fisher King. Link to: Big Lebowski Kaoru Betto Baseball Jersey 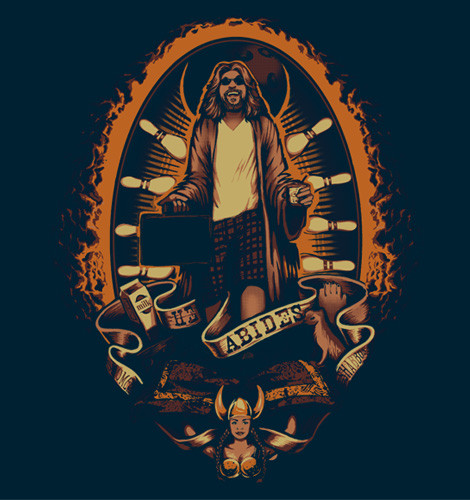 BUY
He Abides Big Lebowski tee
Description: Are you a roller like Walter and The Dude? These The Big Lebowski t-shirts feature an amazing "He Abides" design that includes an image of The Dude and various elements from the movie, including the ferret, the rug, bowling pins, his White Russian and Maude in Viking gear. This would even impress Walter Sobchak (John Goodman) and Jeffrey "The Dude" Lebowski (Jeff Bridges). Wear it as the ultimate tribute to the movie or wear it for an evening of bowling. Link to: He Abides Big Lebowski 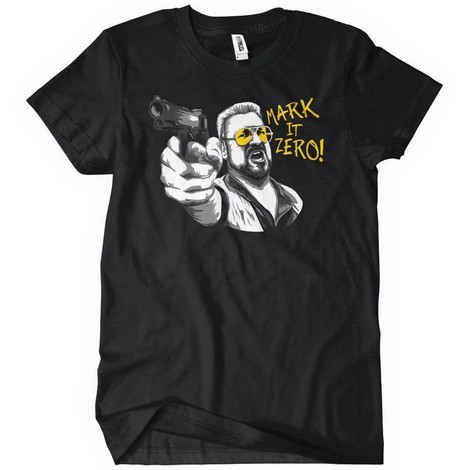 BUY
Big Lebowski Mark It Zero t-shirt
Description: Walter Sobchak believes in the rules. If you step over the line while bowling, you must mark it zero, especially in a league game. If you disagree with his assessment, he won't hesitate to take things to the next level. Pair this Mark It Zero design with a The Dude Abides t-shirt for a cool set of movie related gifts. Link to: Big Lebowski Mark It Zero 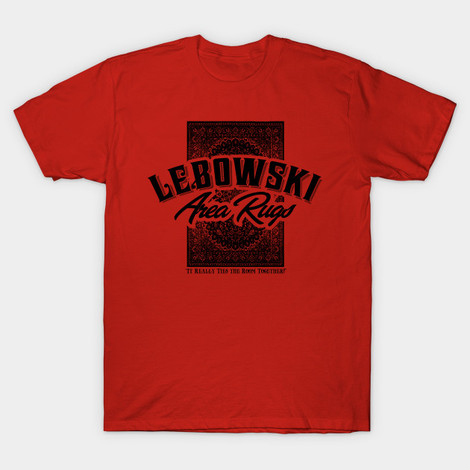 BUY
Lebowski Area Rugs shirt
Description: If you have an area rug that really ties the room together, you'd be upset if someone peed on it too. The Big Lebowski t-shirt displayed here features the quote from the movie along with a logo for Lebowski Area Rugs, which pays tribute to the movie scene. Wear it under your Urban Achievers bowling shirt, the perfect attire for rolling strikes. Link to: Lebowski Area Rugs 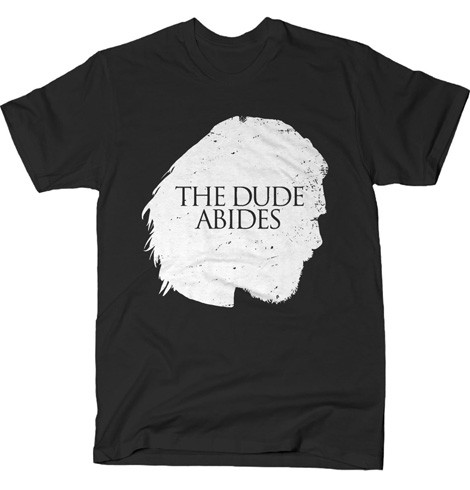 BUY
Big Lebowski Abide King of the North tee
Description: You'll never be out of your element in this Abide Big Lebowski tee that displays The Dude as the King of the North from Game of Thrones. He really ties the realm together. Wear it as you recite your favorite Jeff Bridges and John Goodman quotes from The Big Lebowski. In the movie, Goodman's character, Walter Sobchak, says to his bowling partner Donny (Steve Buscemi), "Donny, you're out of your element." Walter says this after Donny asks The Dude and Walter what they are discussing. You'll be well inside your element in this bestselling The Dude item that lets everyone know that you abide. Pair it with a Walter Sobchak shirt for the perfect gift. Link to: Big Lebowski Abide King of the North 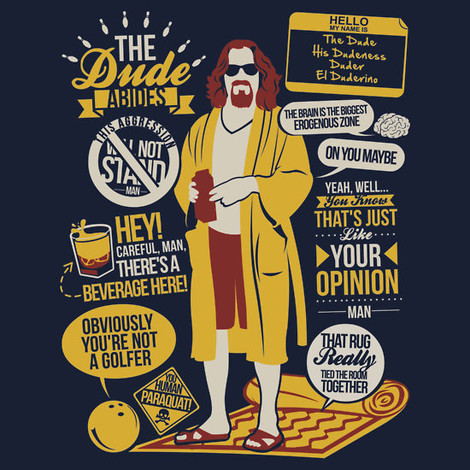 BUY
Big Lebowski Quotes t-shirt
Description: Pair this quotes tee with one of the Shomer Shabbos Big Lebowski t-shirts for the ultimate Jeffrey Lebowski / Walter Sobchak (John Goodman) combo. This t-shirt displays a collage of various movie quotes, including classics like, "Hey! Careful, man, there's a beverage here!", "This aggression will not stand, man," and "That rug really tied the room together." The design is perfect for reciting The Big Lebowski movie quotes as you sip on your own alcoholic (or nonalcoholic) concoction. Use this design to make your friends aware that you abide, man. Link to: Big Lebowski Quotes 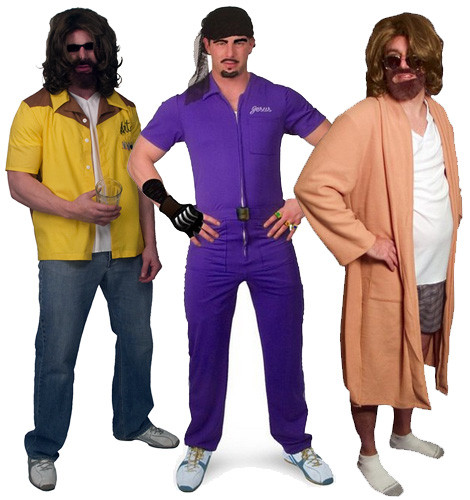