Based on the manga comic series Mach Go Go Go by anime pioneer Tatsuo Yoshida, Speed Racer is a popular 1960s cartoon that tells the tale of a young racecar driver named Speed, and his car the Mach 5. With the help of his girlfriend Trixie, Speed Racer often finds himself competing against the mysterious Racer X, who is actually Rex Racer, Speed's brother. Here, we present a gallery of Speed Racer t-shirts as cool as the anime series itself. The tees include the Mach 5 Speed Racer t-shirt, Racer X tees, and the Go Speed Racer Go t-shirt. Look below for more Speed Racer merchandise, including hoodie sweatshirts, diecast cars, and Speed Racer costumes, such as the fun Racer X costume.
To buy a T-Shirt, click the image or link for store and size information. 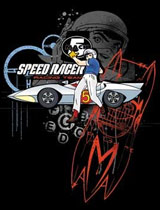 The dark Speed Racer tee on the left displays the main character along with various elements from the show, including the Mach 5 racecar. The dazzling design will have you uttering the cartoon's familiar quote, "Go Speed Racer Go!" Speed is shown in his classic racing uniform. His red neckerchief is a trademark inspired by Elvis Presley's character in Viva Las Vegas. This bestselling tee is perfect for both car enthusiasts and fans of the Speed Racer cartoon. Link to: Speed Racer Team Speed 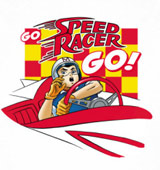 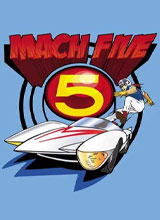 Get behind the wheel in this cool retro style Speed Racer Mach 5 t-shirt. The front of this blue TV show tee displays the hotshot racer himself with the Mach Five logo next to him. Wear this under your Speed Racer costume and helmet as you pretend to slip behind the wheel of Speed Racer's car, the Mach 5, which features the familiar red 'M' on the hood. Most people in North America believe that the 'M' on the hood of the car stands for Mach 5, but in reality the red 'M' is actually the emblem of Mifune Motors, the family business. See the emblem on Speed Racer Diecast Cars and Hot Wheels below. Link to: Speed Racer Mach 5 Retro 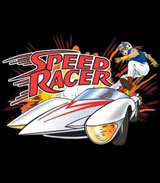 Speed Jump In the Car tee

These officially licensed Speed Racer t-shirts feature a colorful design that includes Speed jumping into his car on the front. The mysterious masked Racer X is a mystery to Speed, who is always curious of X's true identity, especially since Racer X often helps Speed by sacrificing races to protect Speed from other drivers who try to harm him. Speed teams up with his one-time rival, Rex Racer, to save the family business. See the Racer X costume. Link to: Speed Jump In the Car 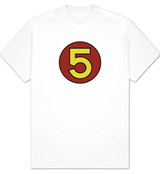 This bestselling Mach 5 Speed Racer t-shirt features a red and yellow Mach 5 logo on the front. A nearly identical logo can be seen on the side of the Speed Racer car, which is available as a diecast merchandise item below. Wear this tee underneath your Speed Racer costume, and tell your friends that you're on your way to challenge Racer X to a one-on-one showdown. Link to: Mach 5 Racer 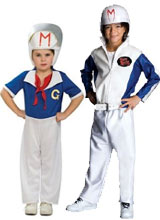 Cross the finish line in one of these official Speed Racer costumes that are available in both the classic retro TV style and the modern Speed Racer movie version. They ship with a white helmet that includes the red Speed Racer logo M on it. Speed's family and friends help him push his car to its limits as he tries to edge out his rival, Racer X, to earn the checkered flag. Speed would be helpless without the assistance of Trixie, Sprite, Chim-Chim, and Pops Racer, his father. Pair this costume with the Go Speed Racer Go shirt for the perfect merchandise combo. Racer X costumes are also available. Link to: Speed Racer and Racer X Costumes 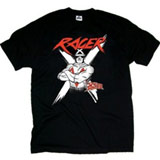 Tune up your ride in this official Racer X t-shirt that features a black, white and red design on the front. The design displays an image of the Racer X character, who appears overtop his trademark "X" on the front of the tee. He is wearing his familiar mask, which hides his true identity. His face is finally revealed in the celebrated episode, "The Trick Race". Link to: Speed Racer - Racer X 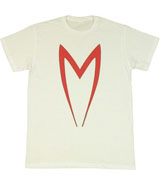 The fronts of these Speed Racer t-shirts feature the familiar red 'M' that is visible on the hood of Speed's car, the Mach 5, and on the front of his racing helmet. Racer X also wears a similar but wider 'M' on the front of his costume. Is this a hint toward Racer X's true identity? Wear this shirt under your Speed Racer costume, complete with red neckerchief and helmet. All that you'll need is a full-scale Mach 5 replica, or a Speed Racer diecast car (below). Link to: Speed Racer Mach 5 Logo 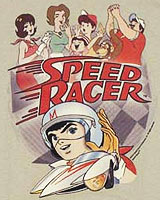 This 80s retro Speed Racer t-shirt features a design on the front that includes the main character, the Speed Racer logo and the entire racing team. This includes Trixie, Pop's Racer, his mom, his brother Spritle and the chimpanzee Chim-Chim. Beneath the logo and Speed himself, we see his racecar, the Mach 5, intensely motoring its way toward the finish line. Wear this Speed Racer merchandise item the next time that you take out your girlfriend Trixie in your Speed Racer car. Link to: Speed Racer Characters 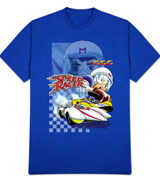 Let everyone know who the speed demon really is in this attractive action-packed Speed Racer logo shirt. The fun and stylish tee is great for a day at the amusement park or just hanging out with friends. A vintage Mach 5 shield logo sits across the middle of the tee, with Speed in various action scenes around it. This Speed Racer merchandise item will have you singing, "Go Speed Racer Go!" It is available on a variety of different color fabrics. Link to: Speed Racer Mach 5 Action 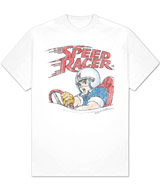 Speed Racer Behind the Wheel

Blaze past the checkered flag wearing this distressed design that features Speed Racer behind the wheel of the Mach 5. Speed's intense face is masked by his helmet that bears his trademark 'M' just above the visor. Wear this tee under a Speed Racer hoodie sweatshirt. It is an adrenaline-filled tribute to the popular cartoon that features Speed and his family, including Pop's Racer, his younger brother Spritle, and the chimpanzee Chim-Chim. Other characters include Trixie and the Mach Five's mechanic, Sparky. Link to: Speed Racer Behind the Wheel 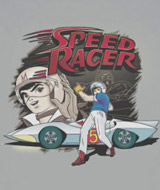 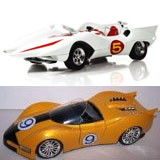