The Monk TV show is a comedy series about San Francisco detective Adrian Monk (Tony Shalhoub). Monk's uncanny ability to solve crimes is aided by what hinders him in daily life, obsessive compulsive disorder. Monk is plagued by a variety of phobias, and he is haunted by the death of his wife, Trudy, the one case he is unable to solve. Monk's counterparts, including assistant Natalie Teeger (Traylor Howard), former boss Leland Stottlemeyer and friend Randy Disher keep Adrian afloat and often alive. Crack open a bottle of Monk's favorite beverage, Sierra Springs, and investigate our attractive selection of Monk t-shirts below.
To buy a T-Shirt, click the image or link for store and size information. 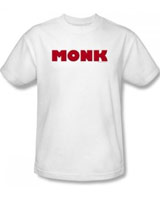 The front of this white logo tee includes the familiar red Monk logo, advertising everyone's favorite obsessive compulsive detective. It is available in men's, women's and kids' styles, and it makes an excellent gift for the Monkish member of your family. It's the perfect attire for solving crimes, acting out obsessive compulsive tendencies, or trying to impress Natalie Teeger (Traylor Howard), Monk's loyal assistant. Wear the tee and see if you can recite Monk's top ten phobias including crowds, lightning and needles. Link to: Monk Logo 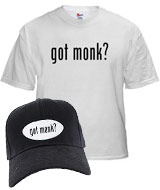 Got Monk? Fans can never get enough of the Monk USA TV show. This is a cute parody of the "got milk" ads prevalent today. Although we know Adrian Monk (Tony Shalhoub) would never approve of having a milk mustache, I think he would find this Monk tee perfectly acceptable. Just like milk makes you strong, with Monk episodes you'll never go wrong. Consume until you get your fill. Browse to see hats. Link to: Got Monk? 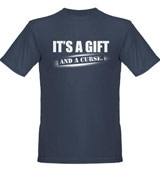 It's a Gift and a Curse Monk t-shirt

Monk's photographic memory and detailed recollections often elicit this question from onlookers. "That's amazing. How do you do that?" to which Mr. Monk replies, "It's a gift.....and a curse." We have all seen it on one of the most talked about USA Network shows, Monk. The greatest television detective since Perry Mason knows that his memory card can be played two ways, and he tries to make the most of it. This Monk t-shirt is great for any fan. Link to: It's a Gift and a Curse Monk 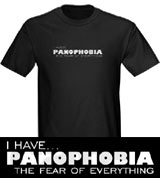 Are you afraid of anything? Spiders? Heights? Imagine being afraid of everything, like Mr. Monk (Tony Shalhoub). It seems that every Monk episode exposes a new phobia. Whether it's one that many of us experience like claustrophobia or something less common like the fear of milk, we all know the feeling. Put on a brave face and click on this link to browse some of the common and not so common phobias that Adrian Monk must face. Link to: Monk Phobia 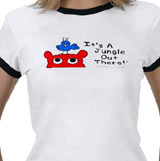 Jungle Out There Monk Theme Song

"It's a jungle out there, disorder and confusion everywhere, no one seems to care, well I do." So goes Randy Newman's 2004 Emmy award winning Monk theme song to the hit TV show. Hearing the lyrics is a sign that your favorite detective show is starting. Now it sounds familiar, right? Take the "well I do" care to heart and express it with one of these "It's a jungle out there" Monk t-shirts. Link to: Jungle Out There Monk Theme Song 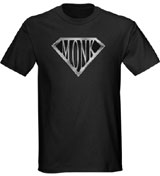 It's a bird, it's a plane, it's Super Monk! Okay, so he may not be faster than a speeding bullet, but when it came time for the statewide police physical fitness test, Monk (Tony Shalhoub) pulled his own weight. Perhaps the likeness is limited to fighting crime and delivering the criminal but to me that's a hero...a superhero. Mr. Monk even has a lady by his side, assistant Natalie Teeger (Traylor Howard), who is well aware of his true identity. Link to: Super Monk 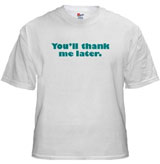 Monk's obsessive compulsive detective ways have entertained us for eight seasons. While plucking lint off your jacket or reorganizing your magazines may not seem important to you, it is to Monk. Don't worry, you'll realize it was important later. This Monk t-shirt displays a classic line from the hit USA Network TV show. Taking a quote from Mr. Monk himself, if you buy this shirt, "You'll thank me later." Link to: You'll Thank Me Later Monk Quote 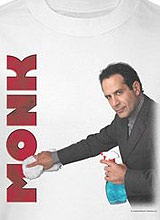 Does your own OCD make you clean everything all the time? Let's hope you're not as bad as Adrian Monk, the detective on these Monk t-shirts. Not only is he plagued with a variety of phobias, his obsessive compulsive disorder makes him a stickler for cleanliness and detail. These t shirts, which feature him polishing the TV show logo, are sure to lighten any mood. Maybe these tees would help our favorite crime fighting, obsessive compulsive detective, Mr. Adrian Monk, the main character on the Monk TV series, realize that he takes things a little too far. We sure hope so. Link to: Monk Clean Up Time 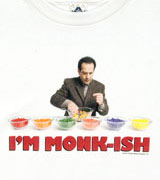 Do you share a few of Mr. Monk's mannerisms? Don't worry, there is a term for what we are experiencing. We are "Monk-ish". According to the definition for the term on this Monk t shirt, we are "of, relating to, or characteristic of USA Network's Adrian Monk". Let your quirky qualities shine through as you show off your pride of being Monk-ish, with these "I'm Monk-ish" tshirts, perfect for the oddball in us all. Link to: I'm Monk-ish 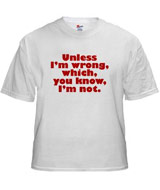 Unless I'm Wrong, Which, You Know, I'm Not. Monk t-shirt

"Unless I'm wrong...which, you know, I'm not..." Most people could never get away with saying this, but Mr. Monk (Tony Shalhoub) is not just anyone. This is a privilege and bragging right that Mr. Monk's crime solving prowess has earned him. I bet Natalie Teeger (Traylor Howard) or Captain Leland Stottlemeyer (Ted Levine) would love to be able to gloat like this. Grab this Monk tee so you can. Link to: Unless I'm Wrong, Which, You Know, I'm Not. Monk 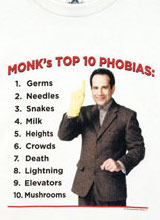 We all know the star of the Monk TV show on the USA Network has millions of fears and phobias, but do you know which top the list? Not many people do. The back of this official Monk t-shirt clarifies the answer to this question with a list of Monk's top ten phobias. I never realized that Monk's fear of milk ranked so highly in his mind, coming in a remarkable fourth place. The front displays the classic Monk logo and the tagline "The Obsessive Compulsive Detective". Just as Monk never goes wrong, you can't go wrong with these Monk t-shirts. Link to: Monk's Top Ten Phobias