During a Saturday Night Live comedy sketch on April 8, 2000, the catchphrase "more cowbell" was immortalized into pop culture history. The SNL sketch features Will Ferrell as cowbell player Gene Frenkle and guest host Christopher Walken as record producer Bruce Dickinson, both fictional characters. The skit is a take on VH1's Behind the Music, and it begins with 1976 footage of Ferrell's Frenkle in a studio recording the song "(Don't Fear) The Reaper" with the band Blue Oyster Cult. Gene Frenkle (Will Ferrell) plays the cowbell so annoyingly it forces the rest of the band to stop twice. However, producer Dickinson (Walken) likes Frenkle's sound and exclaims, "Guess what! I got a fever, and the only prescription... is more cow bell!" Browse our SNL More Cowbell shirts below.
To buy a T-Shirt, click the image or link for store and size information. 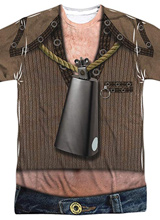 This SNL tee is the perfect tribute to the popular SNL skit. The Will Ferrell shirt features his costume from the skit that stars a bearded Ferrell as Gene Frenkle. He contributes his unique sound to the recording of Blue Oyster Cult's "Don't Fear The Reaper". This is one of our bestselling SNL more cowbell t-shirts based on the famous Saturday Night Live skit, which also features Christopher Walken as the fictional record producer Bruce Dickinson. Link to: SNL More Cowbell Costume 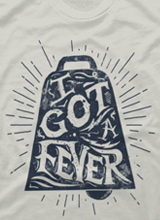 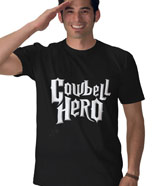 The front of this tee combines the famous SNL catchphrase, "Gotta have more cowbell!" with the Guitar Hero logo. The humorous design on this T has helped to make it one of the most popular SNL More Cowbell t-shirts available. Wear this dark tee so that everyone knows that you are the Cowbell Hero. We can't wait for the video game. The design is available on a handful of different color ts to choose from, including black, white and ash grey. Link to: Cowbell Hero 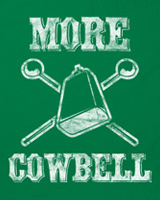 The stylish silver design on this bestselling tee displays the popular catchphrase uttered by Will Ferrell's SNL character's manager, portrayed by Christopher Walken. Below the text is an image of the notorious instrument that helped to make the SNL skit famous. Fans will recall the SNL more cowbell video as they picture Gene Frenkle holding his stick in the air about to strike the brown cowbell in his hand. His bushy hair and beard help to convey his passion for the music as he explores the studio space. Link to: More Cowbell Walken Quote 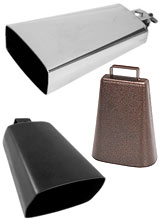 Own a Real Cowbell

The legendary Gene Frenkle taught us that a band's most important member is the cowbell player. Here's your chance to fill his shoes as we present you with the opportunity to buy a real cowbell. Perfect for sporting events, pep rallies or just to call the kids in to dinner, there are a wide variety of options to choose from. Celebrate the history of the instrument with an antique style bell or impress everyone with a shiny new one. Link to: Own a Real Cowbell 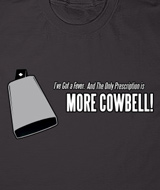 Walken I've Got a Fever t-shirts

The front of this jersey features Christopher Walken's famous Saturday Night Live more cowbell quote that begins, "I've got a fever and the only prescription is... More Cowbell." The Christopher Walken quote appears on the tee next to an image of a cowbell. Look for this SNL quote on other more cowbell shirts, including Ts, tank tops, and sweatshirts. Also in women's. Link to: Walken I've Got a Fever 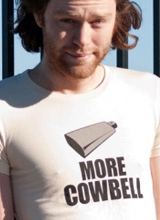 The front of this T features the Gene Frenkle inspired Cowbell, along with the quote. The image reminds us of things like Dickinson's Gold-Plated Diapers, for those unafraid to explore the studio space. The diapers are part of Bruce Dickinson's line from the SNL skit. After the band decides that they want Gene Frenkle (Will Ferrell) to play the cowbell on their "Don't Fear The Reaper" track, Bruce responds by saying, "Babies.. before we're done here.. y'all be wearing gold-plated diapers." Link to: SNL More Cowbell 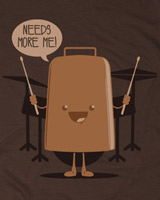 This Saturday Night Live more cowbell t-shirt features an image of a cow bell, with the phrase, "needs more me!" The design is presented here on a brown T that is sure to give everyone a fever. It is also available in a variety of sizes, from small to triple XL. Look for similar designs on sweatshirts and other tees. Wear it as part of your More Cowbell costume ensemble. Link to: More Cowbell 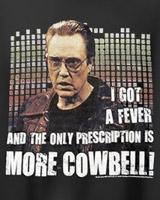 I Got a Fever and the Only Prescription is More Cowbell 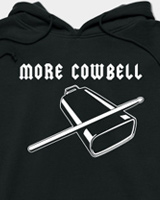 This comfortable more cowbell hoodie sweatshirt will keep you warm when the air is cold outside. The dark colored sweatshirt features a front pouch pocket and a drawstring hood, with a funny image from the popular Saturday Night Live skit on the front. Grab your new favorite instrument and start banging like Will Ferrell does when he's holding his cowbell and playing stick. Wear the cozy hoodie to an outdoor concert or to cuddle up with your significant other. Link to: More Cowbell Hoodie 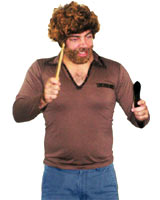 Let everyone know that the only prescription for your fever is this Gene Frenkle More Cowbell costume. The outfit ships with the brown retro long sleeve top, a drumstick and a cow bell. The long sleeve top is made of 100% soft cotton and features leather trim that adds to the outfit's 70s appeal. You'll just need to grow a beard and locate the rest of the band members. Your manager Bruce Dickinson might know where they're at. Link to: Gene Frenkle More Cowbell Costume 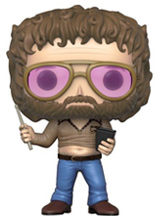 If you've got a fever, a More Cowbell figure will drop your temperature quickly. Why? Because it's cool just like the clothing in our gallery. Add this figure to your Saturday Night Live collectibles. SNL Cowbell figures feature the character in the Will Ferrell costume, complete with the instrument and a playing stick in his hands. Link to: Funko POP! SNL Gene Frenkle More Cowbell Figure