The term Monty Python is the collective name of a group of six predominately British actors, comedians, and artists, who together created the British sketch comedy show Monty Python's Flying Circus, which aired on the BBC from 1969 to 1974. Below, we present a selection of Monty Python t-shirts that celebrate the numerous movies, albums, and stage productions that the Flying Circus has spawned. Don't miss the cool Killer Rabbit Monty Python t-shirt and the Ministry of Silly Walks tee. The Pythons include Graham Chapman, John Cleese, Terry Gilliam, Eric Idle, Terry Jones, and Michael Palin. Their movies include 1979's Life of Brian and Monty Python and the Holy Grail, which pokes fun at the legend of King Arthur. Browse related items such as toys, Black Knight costumes, and Monty Python Killer Rabbit slippers. Start browsing Monty Python t-shirts.
To buy a T-Shirt, click the image or link for store and size information. 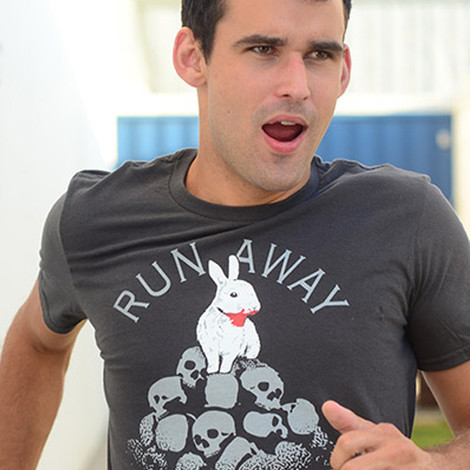 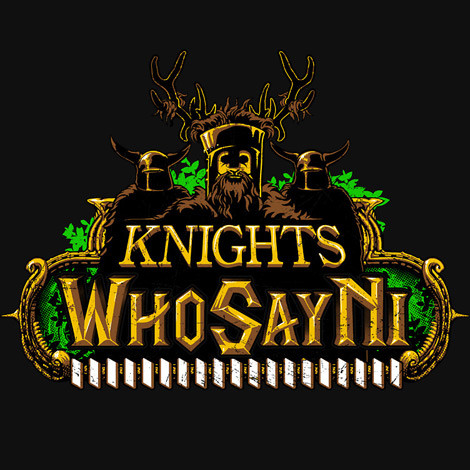 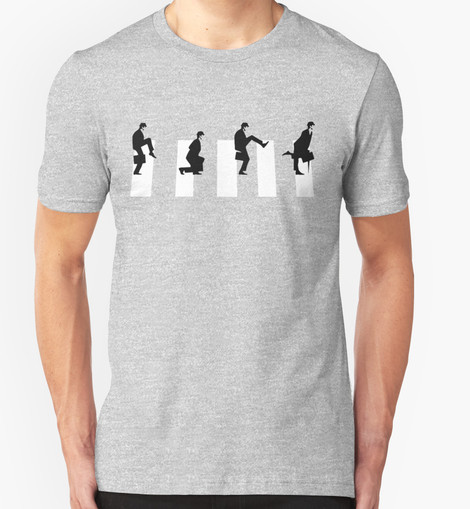 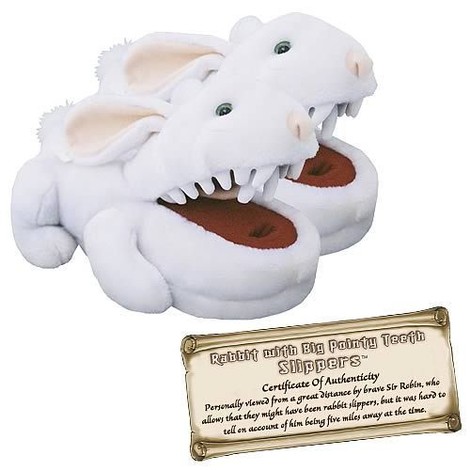 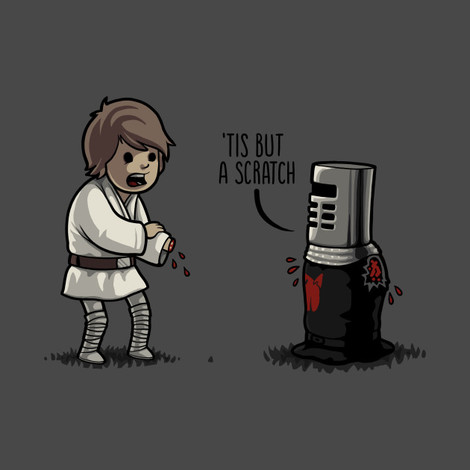 BUY
Monty Python Tis but a Scratch t-shirt
Description: One of the most memorable scenes in the Holy Grail movie is when King Arthur fights the Black Knight. The quote, "Tis but a scratch," refers to the knight's refusal to give up, even after he has been dismembered. This design features the Black Knight comforting Luke Skywalker after the Jedi loses his hand during his fight with Vader. The morbid comedy contained in the scene is similar to that found in many of the Monty Python and the Flying Circus comedy skits. These Black Knight Monty Python t-shirts are enjoyable joke tees that celebrate the Flying Circus style of British humor. Link to: Monty Python Tis but a Scratch 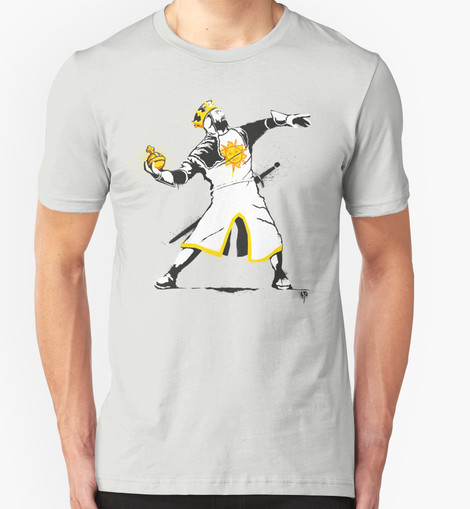 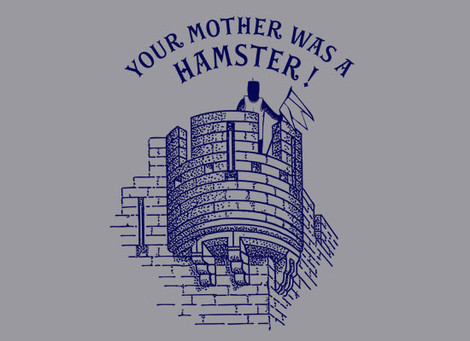 BUY
Your Mother Was a Hamster
Description: "Your mother was a hamster," responds the French Guard to King Arthur in the movie Monty Python and the Holy Grail. This 100% cotton tee features the image of the guard taunting King Arthur for a second time. The statement, "Your mother was a hamster," appears above the image on the front of these Monty Python t-shirts. Taunt your friends with this T, and let them know that a stinker might also be coming in their general direction. Order this with a Monty Python Black Knight t-shirt. Link to: Your Mother Was a Hamster 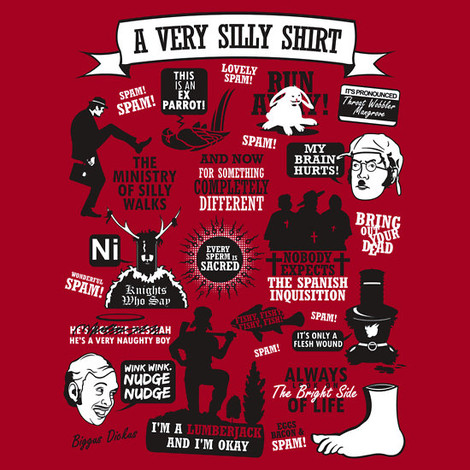 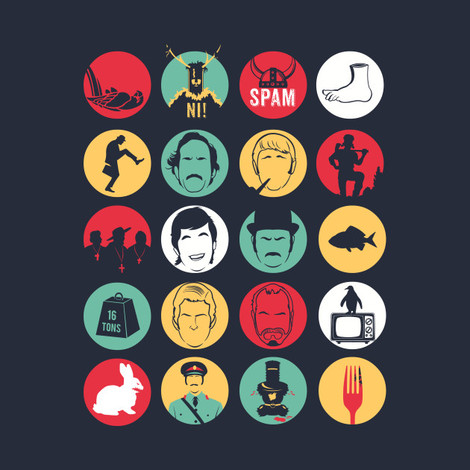 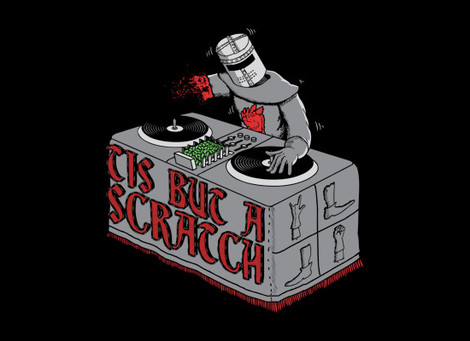 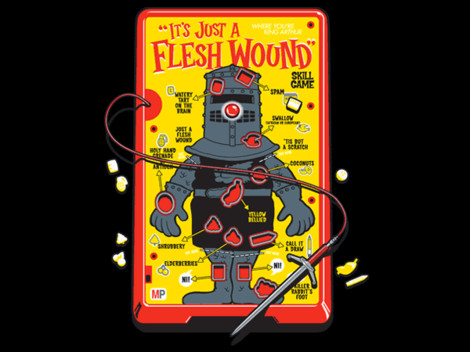 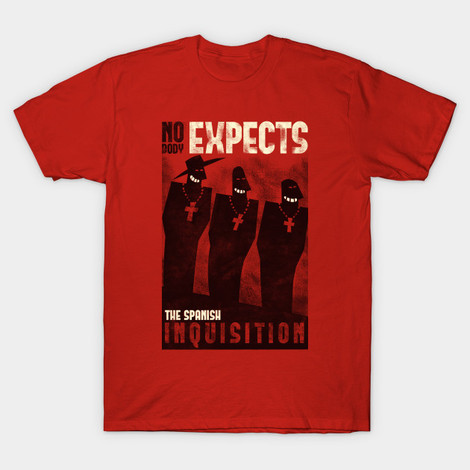 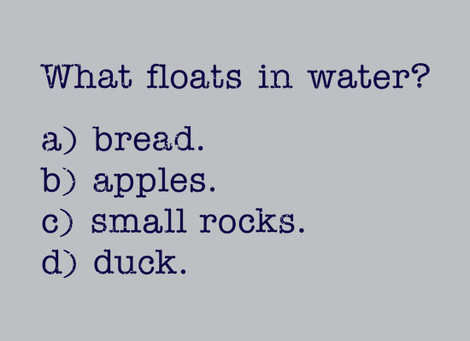 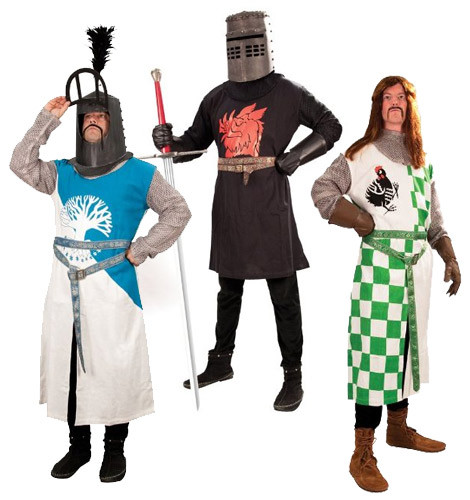 BUY
Monty Python Costumes and Helmets
Description: Outfit yourself in the tunic of either King Arthur (left), the Black Knight (middle), or Sir Bedevere (right). Create your own Monty Python costume with one of these great replicas. Add a Monty Python helmet to complete your ensemble. Some of the helmets, though well made, run small and may be better used as collector's pieces. Read the reviews or contact the seller for more information. Represent your favorite character with one of these Holy Grail costumes (tunics). Link to: Monty Python Costumes and Helmets