In August 1962, Marvel Comics debuted The Mighty Thor, a hammer wielding god based on Norse mythology, who was dropped on Earth by his father Odin to gain perspective on life. He takes on the form of Donald Blake and has no knowledge of his history until evil unveils the truth. Leading a double life, he does his best to protect and care for the humans despite a call to return to Asgard. The 2011 Thor movie starring Chris Hemsworth has brought a whole new life to this Avenger. If you believe he deserves a thunderous applause from both worlds, browse our gallery of Marvel Thor t-shirts and clothing including the Mighty Thor hammer shirt and Mjolnir tee. Merchandise includes Thor costumes, helmets, toys and posters.
To buy a T-Shirt, click the image or link for store and size information. 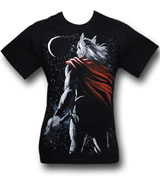 Despite being the Norse god of thunder and lightning, our hero strives for peace. From Earth to Asgard, he watches over it all just like on this article of Thor clothing where he is seen gazing at the stars. If you believe his power is out of this world, then find the perfect piece of Thor gear or merchandise to spread the word. Read the Marvel Comic books of his adventures and share stories of the legendary superhero with your friends. Link to: Thor Star Gazing 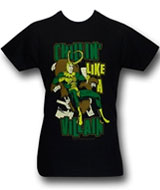 The Chillin' Like a Villain Loki t-shirt featured here is based on Thor's adoptive brother turned archenemy. After Odin killed Loki's father, frost giant Laufey, he adopted him and treated his as his own, but Loki didn't see it that way. He resented the attention given to his brother and became the mischievous one with an evil flare. If you have a naughty side then this may be the tee for you. Link to: Chillin' Like a Villain Loki 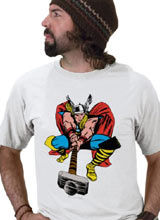 The Mighty Thor shirt here shows him adorned in his classic Marvel Comics attire, including a blue outfit, red cape and winged helmet. Most importantly, he is equipped with his sturdy Mjolnir hammer. This weapon of choice is known for its crushing ability. If thrown at a target it will return to its owner's hand. If the urge strikes you, snag your very own Thor toys, including costume helmets and Thor hammers. Link to: Thor Power 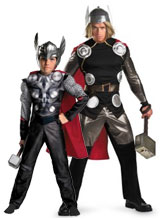 Since the release of the movie in 2011, people of all ages are scrambling to get a Marvel Thor costume just like these ones. Now, no one has to be left out because they are available in men's, women's and children's styles. If you want something less formal, check out the Thor armor tee in the gallery and if you are a little more bad than good, see the green Loki costume shirt. Any of these options are bound to impress the Jane Foster (Natalie Portman) in your life. Wear the disguise as a Thor Halloween costume and use your hammer to crash the evening's party. Link to: Thor Costumes, Hammers, Helmets 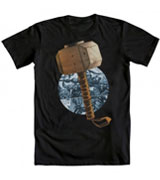 No fan can resist a Thor hammer t-shirt featuring his powerful Mjolnir. The weapon first appeared alongside its possessor in the August 1962, Journey into Mystery #83 comic book. To get your own Mjolnir hammer to swing around, see the gallery for various options. Let's just hope that when you throw yours it comes back to you like it's supposed to. Link to: Thor Hammer Mjolnir 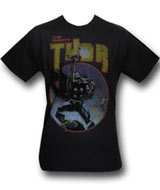 The distressed Mighty Thor t-shirt design is best for people who have been fans for years and want to show it with a vintage look. His powerful pose shows that he can take on anyone at any time, as long as he has his trusty Mjolnir weapon. Of course, being able to summon nature's powers doesn't hurt either. Shake up your world with this item and a prop Mjolnir hammer. Link to: The Mighty Thor Distressed 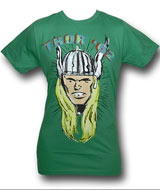 This Thor tee highlights 1962, the year that he started capturing people's attention on Earth as he made his first appearance in Marvel comic books. Along with his hammer, he fittingly took the world by storm and is still doing so today. If this Norse god is at the top of your list of heroes, then get a Thor vintage t-shirt to celebrate his triumphs and a winged helmet to become the mythic god. Link to: Vintage Thor '62 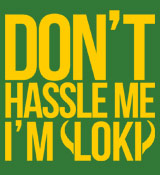 According to Norse mythology, Thor is the god of thunder and lightning. He is strong and powerful, while his adoptive brother Loki is on the smaller side. This Don't Hassle Me I'm Loki shirt was inspired by the t-shirt from the movie What About Bob? Encourage others not to bother you in this fun Loki design or snag some other Marvel Thor shirts now and bring on the lightning. He'll provide the thunder. Link to: Don't Hassle Me I'm Loki 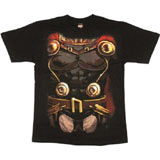 If you are looking for a quick, no fuss costume then this Thor armor tee is ideal. The design features a full set of abs that any superhero would envy. Be sure to see the villain Loki costume t-shirt as well. You could go as one and your friend as another for a great matched pair. Just don't get into an argument. It could ruin the party, especially if you start wielding the Mjolnir hammer in this Thor armor clothing item. Link to: Thor Armor 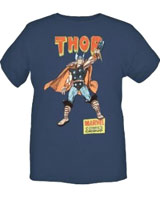 While most Thor apparel today features more modern interpretations of the hero, this one offers a vintage eighties style take on the man who protects the people of Earth on a daily basis. When he's not in hero mode, he works as a doctor and spends time with his love Jane Foster. He also enjoys watching thunderstorms. Perhaps you both have that in common. If so, snag this Marvel tee to wear as you listen to the rumbling of a storm or the Thor soundtrack from the movie starring Chris Hemsworth and Natalie Portman. Link to: Thor Core 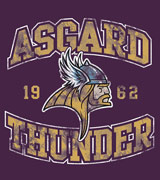 If you are looking to cheer on the main man, then this Asgard Thunder design is the perfect way to do it. Wear it to do battle with Thor's adoptive brother. Pair it with a green Loki shirt costume to help balance your inner mischievousness. Created by writer Stan Lee and drawn by Jack Kirby, Loki first appeared in the comic book Venus #6 in 1949. Check out some of the villain's deviant adventures in the Mighty Thor comics by Marvel. Link to: Thor Asgard Thunder 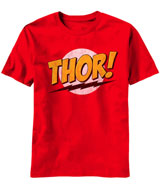 Did you know that Thursday is named after Thor? Not many people know this little gem of trivia but Sheldon Cooper might. If this gives you a whole new appreciation for the Avenger, then get this Thor t-shirt. The vibrant colors and Bazinga reference would bring tears to little Sara Anderson's eyes. Anyone else remember the devoted fan in the movie Adventures in Babysitting? Link to: Bazinga Thor