The Roseanne TV show ran for nine seasons and tells the story of a blue collar family living in the Midwest. The cast includes John Goodman as loveable dad Dan Conner, comedian Roseanne Barr as feisty mom Roseanne Conner and Laurie Metcalf as her wacky ever present sister Jackie Harris. The Conner children include brainiac Becky played by Alicia Goranson (occasionally Sarah Chalke), tomboy Darlene played by Sara Gilbert and odd son D.J. played by Michael Fishman. If you wish you could be a part of the hit sitcom check out our gallery of Roseanne t-shirts including the Roseanne chicken shirt and Lobo Lounge t-shirt.
To buy a T-Shirt, click the image or link for store and size information. 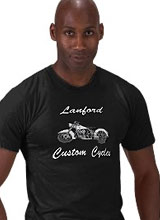 This Roseanne tee is for those people like Dan Conner who follow their dreams rather than let them disappear. He always wanted to start his own bike shop to sell and repair motorcycles, as well as be his own boss, so that's exactly what he did. After battles with loans and partners, he opened Lanford Custom Cycles. Soon after, he hired Becky's boyfriend Mark (Glenn Quinn) to work there as a mechanic, but ultimately the duo failed and the shop had to be closed. If you don't remember this clearly, check out the Season 4 Roseanne DVD to watch it unfold again. Link to: Lanford Custom Cycles 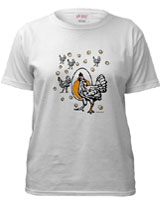 The Roseanne chicken shirt sometimes referred to as the rooster shirt can be seen throughout the series. Not only does Roseanne wear it, but it can also be seen on Jackie, Darlene, DJ, Dan and others. The design was also printed on an apron that some of the Lanford Lunch Box employees wore. Keep your eyes peeled for this odd looking print. It is most prominent in Season 5, Episode 25 titled "Daughters and Other Strangers" but you never know where else it lurks. To hunt it down, watch the Roseanne DVDs. Link to: Roseanne Chicken 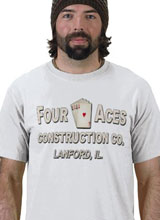 Most people will understand our collection of Roseanne shirts but this one might stump you. True diehard fans will recognize Four Aces Construction Company as one of Dan's places of employment. Unlike Roseanne, he does not change jobs often. He typically works at construction sites putting up drywall and hauling wood. To see him in action, check out the Roseanne DVDs. For those of you who prefer the Roseanne Halloween episodes, then be sure to check out the Halloween compilation DVD which is also available. It might give you some spooky ideas. Link to: Four Aces Construction 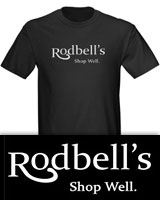 On the TV show we see Roseanne employed in a various number of jobs, including plastics factory line worker, fast food restaurant cashier, telemarketer and hair washer at a salon just to name a few. You might also recall her working as a waitress at Rodbell's department store luncheonette in her unflattering blue dress and pink apron. This Roseanne Rodbell's t-shirt features the store name and their slogan "shop well" from the commercial episode where Darlene is dressed like Heidi. Link to: Rodbell's 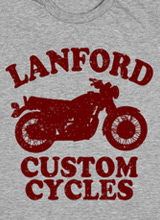 Roseanne is often ranked as a top ten TV mom, so we decided to post this Roseanne tee featuring another version of their very own Lanford Custom Cycles. Dan, Rosie, Jackie and Becky helped at the shop. Even Becky's boyfriend, motorcycle mechanic Mark Healy, put in his time tuning up bikes and spending time with the Conners. The stress of the business was countered by their spooky annual Roseanne Halloween episodes that can be viewed on the compilation DVD. Link to: Roseanne Lanford Custom Cycles 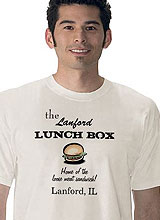 If at first you don't succeed, try, try again. Although they failed with Lanford Custom Cycles, it did not prevent them from starting another business in the future that did manage to thrive. In Season 5, Roseanne, her sister Jackie, her friend Nancy (Sandra Bernhard) and her mother Beverly (Estelle Parsons) open The Lanford Lunch Box. Their version of the perfect loose meat sandwich is received well by patrons and the restaurant holds its ground. Maybe they just needed to stick to what they knew well. If you envy the Conner enthusiasm, grab one of these Lanford Lunch Box Roseanne t-shirts today. Link to: Lanford Lunch Box 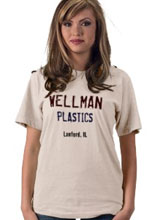 During Season 1 of the TV show Roseanne, our leading lady works at Wellman Plastics on a factory line until she and her friends quit because of an unbearable boss. She soon regrets her decision to abandon a steady paycheck when she has to resort back to telemarketing and all her friends seem to be landing their dream jobs. At least she can be whatever she wants on her favorite holiday of the year. Check out the Roseanne Halloween DVD to decide which look is your favorite. We're partial to Darlene's Tippi Hedren Birds costume and Becky's mangled flight attendant. Link to: Wellman Plastics 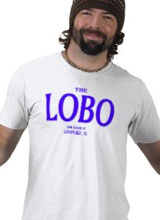 Everyone needs a place to unwind and in Lanford that place is the Lobo Lounge. The Roseanne episodes depict the Lobo as the hub of fights, parties and dates. You can often find the Conners having a beer or Crystal downing a pink squirrel here after a hard day at work. So pull up a seat and snag some Lobo Lounge Roseanne t-shirts for you and your closest drinking buddies. There is sure to be a Roseanne tee style to suit every fan. If your friends have a good sense of humor, check out the Roseanne chicken t-shirt. The goofy tee is seen throughout the series. Link to: Roseanne Lobo Lounge 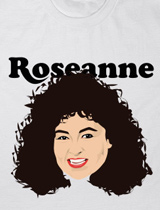 In the early eighties, one of Roseanne's standup comedy acts focused on how being a housewife and mother wasn't as glamorous as everyone tried to make it out to be. She preferred the term domestic goddess for this role, and ultimately it led to her hit TV show Roseanne that we all know and love. Grab this domestic goddess t-shirt featuring the woman who started it all. Link to: Domestic Goddess Roseanne 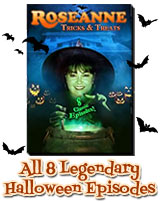 If you're looking for some of the best Halloween TV show episodes ever created, start a tradition of watching this Roseanne Halloween Tricks & Treats DVD. The priceless compilation includes eight episodes (one more than the previous Roseanne Halloween DVD) and features guest stars like George Clooney, Sandra Bernhard and Ed McMahon. These ghoulish episodes were alotted enormous budgets and as a result showcased costumes that are still talked about today. Link to: Roseanne Halloween Collection DVD