The Disney Channel Camp Rock movie tells the story of Mitchie Torres (Demi Lovato), an aspiring, shy young singer who attends the music themed retreat Camp Rock. Mitchie quickly catches the attention of conceded pop star Shane Gray (Joe Jonas), who hears her singing but doesn't see her face. At Camp Rock, Mitchie and Shane have various interactions, eventually leading to Shane discovering the identity of the girl with the voice. Let everyone know that you were there too with our gallery of Shane and Mitchie Camp Rock t-shirts and clothing. Wear the Final Jam Camp Rock tees under a costume or hoodie sweatshirt.
To buy a T-Shirt, click the image or link for store and size information.

Find your own voice in this bestselling Shane and Mitchie Camp Rock t-shirt. The design on the front features a silhouette of the pair singing together. Demi Lovato's Camp Rock character, Mitchie Torres, is shy and fears rejection. Her fear is compounded by the fact that in order for her to afford the tuition, her mother has to work at the music camp as a cook. At first, Mitchie is embarrassed by this, despite the fact that her mom also runs a catering service called "Connie's Catering". Collect it with the Shane and Mitchie Camp Rock dolls. Link to: Camp Rock Find Your Own Voice

There is no better way to convey your adoration for the original Disney Channel movie than with this piece of Camp Rock clothing that displays the logo for the movie. The Disney logo itself appears above the easily recognizable design, which makes this perfect for fans who love Disney and the Camp Rock Demi Lovato movie. Wear it as you karaoke with songs like "We Rock", "Play My Music" and "Who Will I Be" from the Camp Rock Soundtrack CD, or wear it as part of a Disney Camp Rock costume. Link to: Disney Camp Rock Logo

Summon your inner superstar in this neon Camp Rock tee that displays an image of Mitchie Torres along with the fictional Connect 3 band, made up of Shane Gray and his bandmates Jason and Nate. Of course, we all know the real identity of Shane Gray (Joe Jonas) and his fellow band members. Rock out in this attractive tee that looks great with a Camp Rock hoodie sweatshirt. Pair it with a singing Camp Rock Shane doll for the perfect gift. Add a singing Demi Lovato Mitchie doll for a sweet duet. Link to: Camp Rock Band 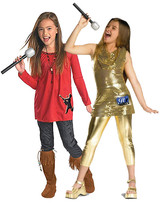 There's no better way to embody the spirit of the original Disney Channel movie than with these Mitchie Camp Rock costumes. Choose from among several outfits, including Mitchie Torres' Final Jam costume and a gold sequin It Girl ensemble. Add a microphone and other props to make your pop star outfit complete. Dress a cute guy friend in a Shane costume so that the two of you can karaoke "This is Me" together from the movie's soundtrack. It will be hard to hide who you wanna be in these costumes. Link to: Camp Rock Costumes 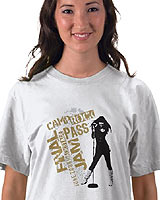 These Mitchie Camp Rock t-shirts commemorate the Final Jam at the end of the movie. Shane Gray and his band Connect 3 act as judges for the competition. As the Final Jam show comes to a close, Demi Lovato's Camp Rock character Mitchie Torres enters the stage for a final performance, singing "This is Me". The song explores Mitchie's newfound confidence in herself. "Now I found who I am, there's no way to hold it in," she sings just before Shane Gray joins her on the stage. Link to: Camp Rock Final Jam 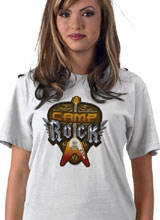 The unique Camp Rock clothing item on the left displays a guitar pick logo design that emphasizes the rock and roll elements from the original Disney Channel movie. An electric guitar stands vertical in the design and metallic font highlights the word "Rock" in the film's title. These guitar pick Camp Rock tees are perfect for older fans, or even young fans who want to have a jam session with their friends. You can practice singing Connect Three's "Play My Music" Camp Rock Soundtrack song. If music is in your soul, never let it go. Embrace the music with Shane and Mitchie Camp Rock dolls. Link to: Camp Rock Guitar Pick Logo 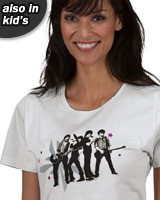 Embrace your retro side and add this stylish design to your collection of Camp Rock clothes. The design, available on a variety of garment styles, features the movie characters Jason, Mitchie, Shane and Nate, striking a pose as they perform. Strike similar poses with your Mitchie and Shane Camp Rock singing dolls that include accessories like microphones and a guitar. If you're too old for dolls, sing along to the Disney Karaoke Camp Rock CD that includes a "This Is Me" karaoke version. Link to: Disney Camp Rock Cast 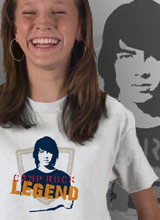 Shane Gray might be a bit full of himself in the beginning, but he definitely learns a few life lessons along the way. This is thanks to his Connect 3 bandmates, Jason and Nate, who convince him to instruct the dance classes at the retreat. This Shane Camp Rock t-shirt displays an image of the legend himself. Wear it to ward off the evil diva Tess Tyler (Meaghan Jette Martin). Just make sure that Shane eventually knows your real identity. You might be able to convince him with a Demi Lovato Camp Rock costume, or maybe you should sing the This Is Me karaoke version to win his heart. Link to: Shane Camp Rock 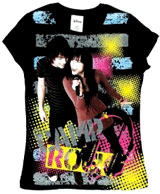 Unleash your inner pop star in this Shane and Mitchie Camp Rock tee that displays an image of the two stars singing together. Shane Gray spends most of the Original Disney Channel Movie searching for the girl with the voice, as evidenced on the soundtrack by the song "Gotta Find You". He sings the song to Demi Lovato's character when they're sitting by the lake. Warm up with your sweetheart by wearing this clothing item under the Camp Rock hoodie sweatshirt displayed below. Link to: Shane and Mitchie Camp Rock 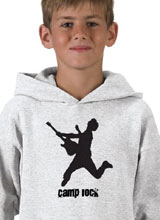 Whether you're about to "Start the Party" in Shane Gray's dance class, or light up your own stage as you sing along to the Camp Rock Karaoke CD, this comfortable light grey hoodie is the perfect clothing item to unleash your moves in. The zip up sweatshirt features a silhouette of Nate from the film pictured on the front. Add more movie clothes from the gallery to create the perfect gift. Choose one of the Camp Rock t-shirts or bundle the sweatshirt with one of the Shane or Mitchie Camp Rock singing dolls. You'll be ready to have your own Final Jam competition like in the movie. Link to: Camp Rock Hoodie Sweatshirt

Choose between Camp Rock singing dolls and Shane and Mitchie fashion dolls. The figures will allow your kids to reenact all of their favorite movie moments, including the Final Jam. The singing Camp Rock figures will also enable them to sing along with their favorite character, whether it is Mitchie Torres or Shane Gray. Bring playtime to life with these fun action figures. Link to: Camp Rock Shane and Mitchie Dolls