The NBC Heroes TV show follows the lives of a group of individuals who discover that they have been blessed (or cursed) with unique superpowers. Using abilities such as telepathy, time travel, flight, and instantaneous regeneration, the group struggles to understand their purpose, which could be to stop a future explosion that will destroy New York City. Below, browse a selection of Heroes t-shirts that tie into the characters and storylines from the TV show. The tees include the Save the Cheerleader Save the World t-shirt and the Hiro Heroes t-shirt. The success of the TV series spawned a spin-off miniseries titled Heroes: Origins, which uses each episode to introduce a potential new character for the show. Browse various designs for more Heroes merchandise, such as hoodies and Heroes hats.
To buy a T-Shirt, click the image or link for store and size information. 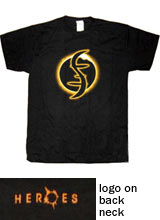 The Heroes quote, "Save the cheerleader, save the world," is first heard in episode four of season one, and it quickly becomes the most recognizable catchphrase from the TV series. The two most familiar symbols from the series are the eclipse and the Heroes Helix symbol. The latter appears on the hilt of Hiro Nakamura's sword. Both symbols can be seen on this tee. Saving the cheerleader is a key factor in preventing the destruction of New York City. Look for the quote on the front of the Heroes Save the Cheerleader Save the World t-shirt below. Link to: Heroes Helix Symbol

The front of this dark tee features the Heroes TV show logo printed across the chest. The design displays the title of the show, with an image of a solar eclipse replacing the letter 'O' in the title. These Heroes t-shirts are available in five different sizes, and they make the perfect gift for any fan of the science fiction TV series. Match it with Heroes hats. Link to: Heroes 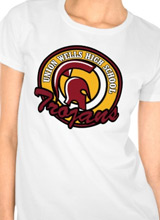 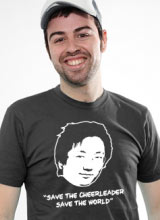 Save the Cheerleader Hiro t-shirt

As everyone knows, part of the plot of the Heroes TV show revolves around the idea that if you save the cheerleader, then you save the world. This Hiro Heroes tee displays the quote from the Heroes episode in which Hiro travels in time and conveys his message to Peter Petrelli. An image of Hiro Nakamura is visible with the quote underneath. The comic style design will have you uttering other Hiro Heroes quotes like, "Nobody believed me... Now I'm humanities last hope!" Purchase this with other Heroes merchandise items, such as hoodies and ringer Ts. Link to: Save the Cheerleader Hiro 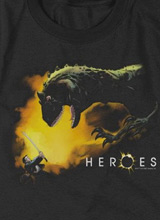 Computer programmer Hiro Nakamura (Masi Oka) is convinced that he is a hero. Hailing from Tokyo, Hiro has the ability to teleport and manipulate the space-time continuum. He returns from the future to give the present version of himself a message, "Save the cheerleader, save the world." He is convinced that he can do so with the help of the other "special people," who, like himself, also possess unique abilities. Be like Ando and help support Hiro with one of these Heroes t-shirts, which are available in a variety of styles, including both men's and women's. Link to: Hiro Sword 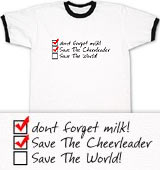 The front of this Heroes Save the Cheerleader Save the World t-shirt displays a To Do List, which features a list of three things to do: don't forget milk, save the cheerleader, and save the world. A red check mark is visible in front of the first two tasks, leaving you with the task of saving the world still left to accomplish. This fun piece of Heroes TV show apparel can be customized to fit your style. Link to: To Do List Save the Cheerleader 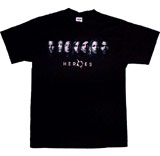 The design on the left displays the Heroes logo underneath the cast, including Nathan Petrelli and his brother Peter Petrelli. Nathan is a Congressional candidate from the state of New York, who possesses the superhero ability of self-propelled flight. The Heroes t-shirt on the left is perfect for both new and diehard fans of the superhero sci-fi series. Link to: Heroes Cast 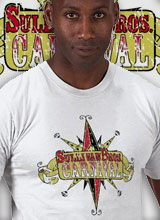 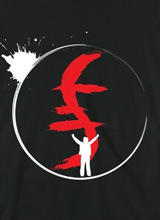 Save the world like Hiro in this Heroes Hiro shirt, and make sure to be extra careful who you befriend in the vicinity of Union Wells High School. Villains like Sylar could be lurking nearby, especially around Claire Bennet. You don't want to be stuck with the job of having to save the cheerleader. Wear one of these original Heroes t-shirts to show your support for the show and its characters, Hiro Nakamura and Claire Bennet (Hayden Panettiere), the biological daughter of Nathan Petrelli. Link to: Helix Hiro 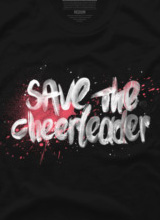 Save the Cheerleader Save the World 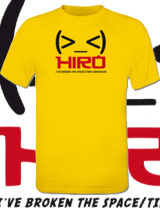 On the Heroes TV show, Hiro (Masi Oka) possesses the superhuman ability of space-time manipulation. This means that he has the ability to teleport and travel through time. This Heroes t-shirt features a keyboard character rendering of Hiro with the statement, "I've broken the space/time continuum." He differs from the other characters on the show in that he is happy about his powers. He can teleport out of his mundane life. Link to: Hiro Space Time 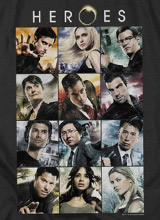 These Heroes tees feature twelve images on the front, and are perfect to wear with Sylar's watch. Watchmaker Gabriel Gray had been repairing the German watch for seven years, before deciding to abandon his current life and take the watch's name as his own. Sylar's watch reads 8:30 when he arrives at Zane Taylor's home. The squares tee is a bestselling Heroes merchandise item. Link to: Heroes Character Squares 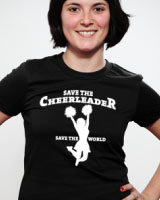 Heroes Save the Cheerleader

Save the world with the cheerleader logo design on the front of these Heroes t-shirts. The logo displays a white silhouette of the cheerleader, Claire Bennet (Hayden Panettiere), jumping into the air holding her pom poms. Wear it as you read the Heroes graphic novel, which embraces the comic book elements from the Heroes TV series. For the perfect gift, order this Save the Cheerleader Save the World t-shirt with a Hiro Master of the Sword tee or a helix necklace. Link to: Heroes Save the Cheerleader 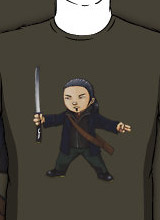 This piece of Heroes apparel features Hiro with his Helix Sword. Wear it as you repeat the Hiro Nakamura "Yatta" quote from the Heroes TV show. Yatta is the short form of the Japanese word "yarimashita", which translates to "I did it!" Hiro (Masi Oka) opens his arms and exclaims "Yatta!" after successfully teleporting to Times Square, Manhattan. The character design on this Heroes t-shirt is a trendy tribute to Hiro and his sword. Pick up yours today and don't be afraid to scream "Yatta!" the next time you accomplish a difficult task. Link to: Future Hiro