The comic book character The Punisher (a.k.a. Frank Castle) first appeared in The Amazing Spider-Man #129 (Feb. 1974) as an antagonist of Spidey. Marvel gave the character his own comic in the 1980s, solidifying him as a vigilante crime fighter bent on avenging the death of his family at the hands of the mob. Here, we celebrate The Punisher comic book and subsequent movies with a selection of Punisher t-shirts and merchandise. The tees include the skull logo Punisher t-shirt and Marvel Punisher movie shirts. Other merchandise includes teen and adult Punisher costumes, hoodie sweatshirts and Punisher belts with realistic bullets.
To buy a T-Shirt, click the image or link for store and size information. 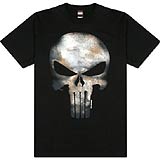 The Punisher No Sweat t-shirt

The battle-worn skull on the front of this Punisher tee is a testament to Frank Castle's one-man war on the mob and all criminals in general. This version of The Punisher skull logo offers more of a three dimensional, brazen appearance. It is a bestselling Punisher shirt and an official product of Marvel Comics. Wear it the next time you feel like grabbing your guns and feeding the mob your ammo. Link to: The Punisher No Sweat 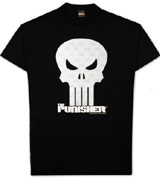 The design on this official Marvel Punisher apparel item includes a background of white skulls, which fills the larger off-white Punisher skull logo on the front of the tee. Underneath the logo, is The Punisher comic book title printed in white lettering. Fans will easily recognize the classic Punisher logo that incorporates a cartridge bandolier in place of a skull's teeth. Wear it with the Punisher belt (below). The leather belt displays a bullet-studded design. Link to: The Punisher Crystallized Logo 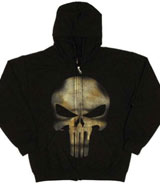 Frank Castle doesn't stop fighting crime because it's chilly outside, and you don't have to either. This comfortable, officially licensed Punisher sweatshirt hoodie will keep you cozy. It's perfect for fans who want to keep warm while still expressing their darker side. The perfect Punisher hoodie, this hooded sweatshirt displays a distressed version of the Marvel comic book logo. Wear it overtop your favorite Punisher t-shirt for the ultimate vigilante outfit. Link to: The Punisher Hoodie 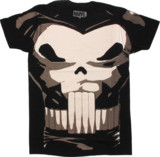 The cool Punisher costume tee on the left displays a white version of the Punisher skull logo, with an ammo belt design around the lower rim of the shirt. It's the perfect piece of apparel for costume parties, or for playing paintball (minus the potential stains). Order one of these Punisher t-shirts today to help express your inner psychologically troubled anti-hero. Link to: Punisher Costume 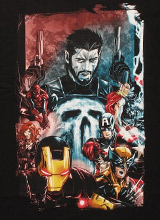 The front of this dark Punisher shirt features an image of Frank Castle holding a gun in his hand. The comic book logo skull can be seen on the front of Frank Castle's chest. He is ready to seek vengeance on Howard Saint, the money launderer who ordered the death of his family. Enter the war zone in this unique piece of official Marvel apparel. Pair this tee with a stylish Punisher belt buckle or a cool Punisher hat. Link to: Frank Castle Punisher War Zone 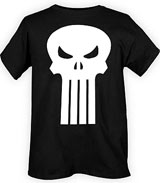 Get into character with this Marvel Frank Castle Punisher tee. This fan favorite Punisher merchandise item displays a basic version of the skull logo on the front. Whether you're a fan of one of the various Punisher comic books, or your interest stems from the Punisher movies, this t-shirt is the perfect way to show your admiration for the gun-toting anti-hero, regardless of the medium. Pair it with a Punisher action figure for the ultimate Marvel comic gift. Link to: Marvel Punisher Skull Logo 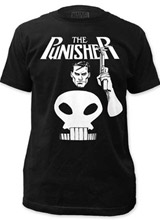 Take aim at this piece of Punisher apparel that displays a comic art design of the Punisher. Frank Castle's gun is smoking as he hunts down his enemies. This Punisher t-shirt is a great tribute to the character's comic origins, which date back to 1974. Pair it with your favorite skull design that displays the classic logo. The skull symbol was first sketched by Gerry Conway. It was later modified by Marvel art director John Romita, Sr, who blew up the basic design and added a gun cartridge for teeth. Link to: Punisher Smoking Gun

Wear this cool leather Punisher bullet belt with any of the Punisher t-shirts displayed in this gallery. In addition to ammo, several skull symbols are visible on the belt. The bullet-studded Punisher belt is available in three sizes and is officially licensed. Link to: Punisher Bullet Studded Leather Belts 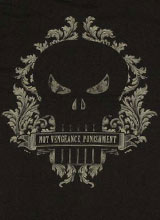 "This is not revenge, it's punishment," Frank Castle explains before he unleashes his swift form of justice. His form of punishment is personified on this dark Frank Castle Punisher shirt. The filigree design on the front of the tee features a silhouette skull logo with the phrase, "Not vengeance. Punishment." The 100% cotton t-shirt is machine washable. Put it on underneath a cozy Punisher sweatshirt hoodie for the ultimate combination of Punisher apparel. This unique tee is perfect to wear as part of your Punisher costume. Link to: Punisher Not Vengeance 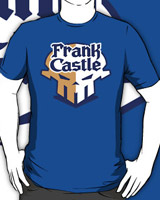 Yes, Frank Castle is hungry for vengeance, but he also has to eat. This creative crossover tee combines the Punisher symbol with the White Castle fast food logo. This Punisher tee is perfect for fans of the comic or movie, who want to uniquely express their admiration for a character that doesn't need superpowers to fight crime. Wear it with a Punisher belt buckle and other Marvel Comics Punisher merchandise as you down a few sliders. Link to: Frank Castle Hungry for Vengeance 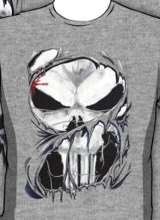 This torn style tee design features the trademark Punisher symbol from the Frank Castle costume visible underneath torn fabric. The Punisher's hatred for criminals has become a relentless obsession that he cannot always keep contained. Frank himself originally wanted to become a Roman Catholic Priest but instead joined the Marines, where he became a Navy Seal. Support Frank's cause in the unique Punisher t-shirt displayed above. Link to: Frank Castle Revealed 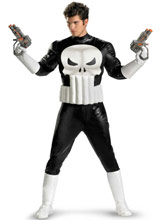 Unleash your inner vigilante with this Punisher costume that features a muscle torso with the familiar Punisher skull logo on the chest. Tell your friends that you are an ex-special forces soldier trained to survive in the wilderness by a Native American scout named Phan Bighawk. Wear the costume overtop one of the Punisher t-shirts displayed above. The ammo belt shown in the photo is sold separately and can be found through this gallery. Closed fists are optional. Link to: The Punisher Costume 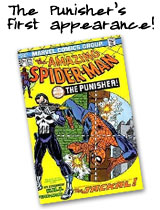 Own the 1974 comic book that introduced the world to The Punisher character. His first appearance in the Spider-Man comic is perhaps the most important character introduction from the Bronze Age of comics. Since his initial encounter with the web slinger, fans have embraced the character as well as the comics and movies that followed. Get your hands on this highly collectible issue. Link to: Amazing Spider-Man #129 Punisher First Appearance Comic Book