Like many other now cult classics, Donnie Darko was not a unanimous box office success upon its initial release in 2001. No one who saw the movie could effectively explain what the story was about, and the movie's star, actor Jake Gyllenhaal, was a relative unknown except for his work in the film October Sky. After the movie was released on video, it soon found an audience and began to emerge as a cult favorite. Below, we present a Donnie Darko t-shirt gallery featuring a variety of t-shirts related to the movie, which has become a surprise hit. After all, why would someone want to watch a movie about a teenager who receives advice from a 6-foot-tall rabbit named Frank? Regardless, new viewers are still discovering that there is more to the film than a havoc inducing rabbit.
To buy a T-Shirt, click the image or link for store and size information. 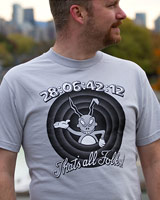 This creative design combines the Donnie Darko movie with the classic Looney Toons ending. After all, Frank did tell us that the world would end in 28 days, 6 hours, 42 minutes and 12 seconds. Here, Frank is telling us, "That's all Folks!" to let us know that the world will soon come to an end. Wear this shirt to remind everyone that the day of reckoning is quickly approaching. Link to: That's Frank 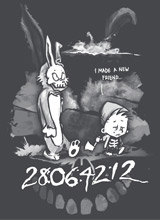 The unique depiction on this dark tee features a Calvin and Hobbes inspired design that is a creative tribute to the movie. It was drawn by artist jimiyo. The Donnie Darko comic strip design features Donnie and the bunny named Frank in the roles of Calvin and his sardonic stuffed tiger Hobbes. This Donnie Darko tee makes a great gift for either yourself or any fan of the film that you know, regardless of whether they see an imaginary six foot bunny rabbit or not. Link to: Donnie Darko Comic 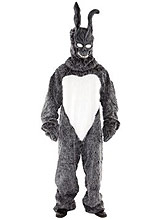 This authentic Donnie Darko bunny costume is the perfect way to celebrate your love for Donnie's (Jake Gyllenhaal) strange friend who only he can see. Wear this classic Donnie Darko costume overtop your favorite Donnie Darko t-shirt. He is not your average teenager. He has emotional problems, experiences "hallucinations", believes in time travel, and his best friend is a large bunny. Combine this outfit with Donnie's skeleton costume so you and a friend can recreate the movie's characters. Purchase it with a Frank rabbit head logo tee. Link to: Donnie Darko Rabbit Costume 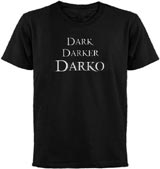 It's one of several taglines for the movie that was used heavily in the promotion of the film. This eye-catching shirt features a 3D style rendering of the phrase, which appears to emerge from the front of the black t, just as the emphasis on each word similarly builds in the phrase, "Dark, Darker, Darko." This cool tee is also available in navy blue, military green, and cardinal in addition to six different sizes. Link to: Dark Darker Darko 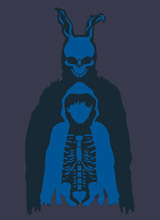 The Donnie Darko tee on the left displays Frank the Rabbit watching over Donnie Darko on the front. The creative design includes a silhouette image of Frank the Rabbit's head watching over Donnie in his skeleton costume. Pair it with a Donnie Darko movie poster to win over the fan in your life. This tee is available in over ten different colors. Not only is it perfect for fans of the movie, it's also great for those individuals who claim that they receive advice from a 6-foot-tall bunny named Frank. Link to: Frank and Donnie 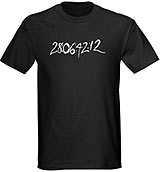 Frank tells Donnie that the world will end in 28 days, 6 hours, 42 minutes, and 12 seconds. Now you can share the 6-foot rabbit's secret with your friends by wearing this great Donnie Darko t-shirt that marks the beginning of the countdown to the end of the world. Fans of the film will certainly recognize these ominous digits. Wear it under the bunny costume. Link to: 28 days, 6 hours, 42 minutes, and 12 seconds 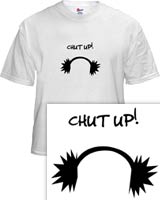 The front of this tee displays the Donnie Darko quote, "chut up!" The expression is a variation of the more common, "shut up." It can be used to let others know that you don't feel like communicating, or it can be directed at someone who you want to stop talking. In the movie, Cherita Chen says, "Chut up!" after Donnie removes her earmuffs. "Chut up" is not as insulting as "shut up", as it is more of a plea to alleviate one's own discomfort with discussing a certain topic. Link to: Chut Up! Donnie Darko 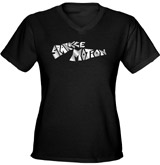 This great quote from the movie is now part of a great t-shirt. "Sometimes I doubt your commitment to Sparkle Motion." The custom made tee is white with a colorful sparkle motion logo, which has been enlarged in the box at the corner of the T image to the left. Click through to see an even larger image of this movie tee, which is perfect to wear underneath your Donnie Darko costume. Link to: Sparkle Motion Donnie Darko 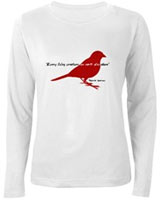 "Every living creature on earth dies alone," says the reclusive Roberta Sparrow, portrayed in the film by character actress Patience Cleveland. These Donnie Darko t-shirts can be purchased in both men's and women's sizes and in various styles including tank tops and short sleeves. Pictured on the left is the women's long sleeve t-shirt. The red sparrow on the tee symbolizes the eerie character of Roberta Sparrow, also known as "Grandma Death". Link to: Roberta Sparrow Donnie Darko 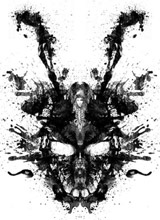 All hail the rabbit with this cool Donnie Darko Frank the bunny tee. The T features an inkblot style reconstruction of Frank's face. An image of Donnie can be seen on the bunny's forehead. In the movie, his imaginary rabbit friend tells him the world will end in 28 days. This Donnie Darko t-shirt is also available in a variety of colors to suit any desire. Link to: Frank the Rabbit 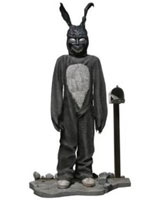 This collectible Frank the Rabbit action figure stands twelve inches tall and says seven different motion activated phrases from the movie. It ships with a detailed mailbox-adorned base for display, an alternate unmasked head and the letter for Donnie. Captivate your friends with this hauntingly detailed figure that is perfect for fans of the cult film starring actor Jake Gyllenhaal. Link to: Donnie Darko Frank the Bunny Action Figure