The critically acclaimed NBC TV show 30 Rock takes place behind the scenes of a live sketch comedy series. SNL alum Tina Fey created the show, which was originally supposed to be a sitcom about cable news until NBC encouraged her to explore what she knew. Fey also stars in the series, portraying a sketch comedy writer named Liz Lemon. Here, we present a gallery of 30 Rock t-shirts, including an official NBC 30 Rock logo t-shirt and other tees. Other items include the Tracy Jordan The Girlie Show TGS t-shirt and the Kenneth the Page costume tee.
To buy a T-Shirt, click the image or link for store and size information.

If you know someone who enjoys the hilarious comedy of the NBC 30 Rock television series, this official logo shirt will certainly appease his or her cravings for more Liz Lemon (Tina Fey) and Jack Donaghy (Alec Baldwin), The Girlie Show's head writer and the suave network executive who constantly interferes with the production of TGS. The TV show's easily recognizable green and white logo appears on the front of this attractive apparel item, which is available in both men's and women's styles. Link to: 30 Rock Logo 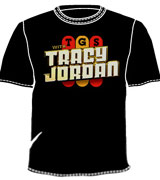 The Girlie Show (TGS) with Tracy Jordan is the name that network executive Jack Donaghy comes up with after he is transferred from the "Head of East Coast Television and Microwave Oven Programming" at General Electric (GE), and reassigned to work at the NBC headquarters at 30 Rockefeller Plaza. His mission is to retool the late night sketch comedy series The Girlie Show. Jack forces head writer Liz Lemon to hire off-the-wall movie star Tracy Jordan. Link to: TGS Tracy Jordan 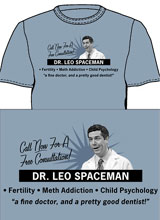 If you ever find yourself unable to adjust to your newfound fame, you might want to make an appointment with Dr. Leo Spaceman. Tracy Jordan's doctor is treating him for "erratic tendencies and delusions brought on by excessive notoriety." Tracy's unusual behavior causes Liz Lemon (Tina Fey) to inquire about the cocktail of medications that Dr. Spaceman has prescribed. The doctor tells Liz that he should be fine as long as he's kept away from bright lights, loud music, and crowds. Wear this Dr. Leo Spaceman 30 Rock t-shirt to promote the fine doctor, who's also a pretty good dentist. Link to: Dr. Leo Spaceman 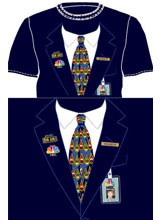 Kenneth Parcell (Jack McBrayer) is the principal page on the 30 Rock TV show. No one really understands why Kenneth is so happy to do his menial job. In two different episodes ("Pilot" and "The Head and the Hair") Kenneth explains that his enthusiasm comes from the fact that he loves television so much. These Kenneth-the-Page 30 Rock costume t-shirts display a design that includes Kenneth's name tag, his id badge, his necktie, and the NBC logo. Wear this tee as you imitate Kenneth's distinctly Southern accent, happy attitude and unusual personality. Link to: Kenneth-the-Page Costume 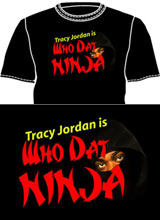 The design on the left was taken from the movie poster art for Tracy Jordan's film, Who Dat Ninja. The epic martial arts movie tells the story of a deadly African-American ninja. The poster for the movie can be seen hanging in Tracy Jordan's office on a regular basis. Other Tracy Jordan films include Black Cop / White Cop in which he plays a black police officer pretending to be white. The movie's tagline proclaims, "One does the duty, the other gets the booty." Support Tracy's acting talent by wearing the official Who Dat Ninja 30 Rock t-shirt shown on the left. Link to: Tracy Jordan Who Dat Ninja 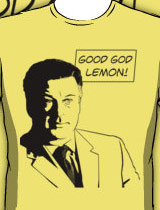 The Girlie Show was the original name of the fictional sketch comedy series on the 30 Rock TV show. The name was changed to TGS with Tracy Jordan after executive Jack Donaghy (Alec Baldwin) stepped in to revamp the series, which included the addition of movie star Tracy Jordan (Tracy Morgan). The Girlie Show's head writer Liz Lemon (Tina Fey) opposed Jack's changes, but she is at the mercy of her boss's decisions. Jack and Liz's constant disagreements provide the basis for the show's storylines. Show your support for Jack Donaghy. Link to: Jack Donaghy 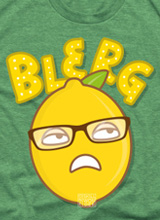 These cool Liz Lemon Blerg 30 Rock t-shirts pay tribute to one of the TV show's best catchphrases. It was first heard during a first-season episode and was used to express revulsion, deflation and disgust. Actress and series creator Tina Fey (Liz Lemon) explained, "Blerg is something we say around the writer's room and also since we're on network television we can't curse or anything...sometimes we run out of non-cursing ways of saying things." Pair this Liz Lemon Blerg 30 Rock tee with a Jack Generalissimo or Lemon Out design featuring the Liz Lemon quote. Link to: Liz Lemon Blerg! 30 Rock 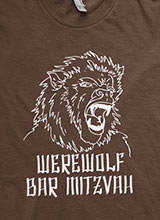 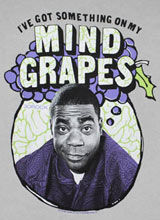 "I've got something on my mind grapes," reads the front of this officially licensed Mind Grapes tee featuring Tracy Jordan (Tracy Morgan). Jack Donaghy (Alec Baldwin) coined the phrase in the 30 Rock episode "Tracy Does Conan" when he's trying to think of a quip to use during his introduction of Jack Welch at a fundraiser. Donaghy reads Liz Lemon (Tina Fey) his joke, which confuses her. Pair it with other Tracy Jordan designs like the The Girlie Show, TGS, or Dark Sensations NBC 30 Rock t-shirt that is perfect for fans who want to expose their affection for the show's coolest character. Link to: Mind Grapes