Based on the book Fight Club by Chuck Palahniuk, the movie of the same name is equally as engrossing and unusually twisted. Edward Norton stars as the unnamed narrator who befriends Tyler Durden (Brad Pitt), a soap salesman who persuades Norton's character to participate in an underground fight club. We quickly learn the rules, the main one is "you do not talk about Fight Club." The movie's theme of apathy and aggression resonated among its audience, and soon fans were writing their own fight club scripts by beating each other senseless in their backyards. Here, you can celebrate the movie and Chuck Palahniuk's book through our selection of Fight Club t-shirts, soap bars and Tyler leather jackets.
To buy a T-Shirt, click the image or link for store and size information. 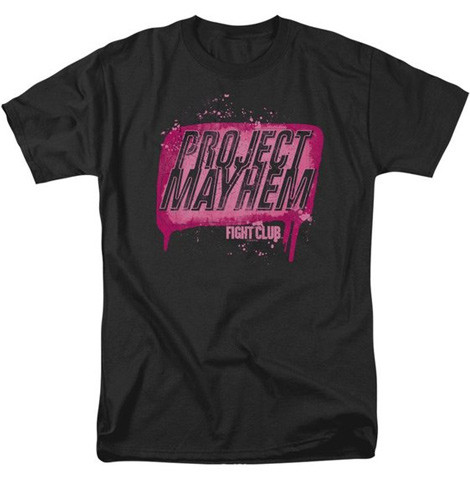 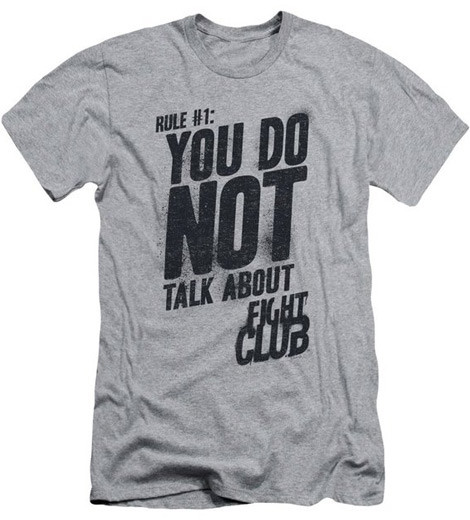 BUY
Do Not Talk About Fight Club tee
Description: Straight from the Fight Club movie to the front of this tee comes the number one rule of Fight Club, as expressed by Tyler Durden, "You do not talk about Fight Club." Brad Pitt's character, Tyler, delivers the quote in the movie, speaking to the Narrator (Edward Norton). The design on this t-shirt immediately conjures memories of mischief, mayhem, and soap. Pair it with the movie poster for the ultimate gift combination. Anyone who has seen the movie will easily recall the Brad Pitt quote on this memorable tee. They might even invite you to a local bare-knuckle brawl. Just don't talk about it. Link to: Do Not Talk About Fight Club 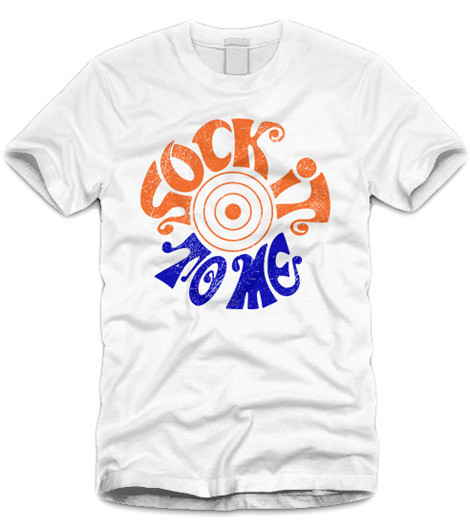 BUY
Tyler's Sock it to Me Fight Club t-shirt
Description: This vintage Sock it to Me design is worn by Brad Pitt's character, Tyler Durden, in the Fight Club movie. The orange and blue retro style logo has a slightly worn look to give it a more rugged appearance. Whether you're in the mood for a stroll along Paper Street, or you plan on becoming a member of Tyler Durden's Project Mayhem, this Fight Club t-shirt will keep you in style no matter what you're doing. Tell your friends that your soap salesman friend Tyler lent it to you. Link to: Tyler's Sock it to Me Fight Club 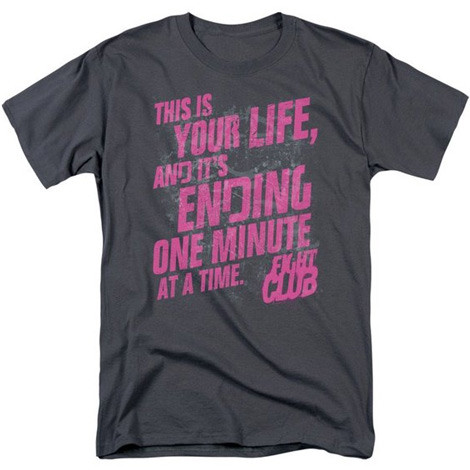 BUY
Fight Club Life Ending T-Shirt
Description: A great addition to our selection of Fight Club t-shirts, the This is Your Life Fight Club tee displays Edward Norton's quote from the movie, "This is your life, and it's ending one minute at a time." Wear this tee to remind others that the marrow of their life is being sucked away by consumerism and occupations like the Narrator's mind-numbingly dull job in the Federated Motor Corporations's Compliance and Liability Division. It is part of what drives him to participate in and follow the rules of Fight Club, Tyler Durden's underground organization for bare-knuckle fighting. Link to: Fight Club Life Ending 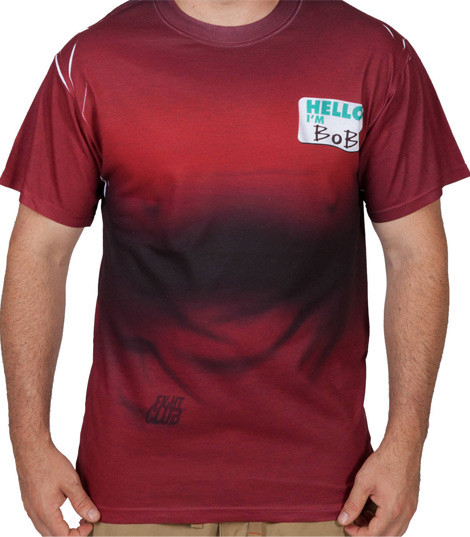 BUY
Hello I'm Bob tee
Description: A humorous choice, this name tag T reads, "Hello, I'm Bob." We encounter Robert "Bob" Paulson, portrayed by Meat Loaf, at support group meetings that Edward Norton's character attends. The Narrator (Norton) learns that Bob has developed breasts as the result of a hormone imbalance from having his testicles removed due to cancer. This Fight Club shirt is a fitting tribute to Bob, as it even shows off his unavoidable assets. Link to: Hello I'm Bob 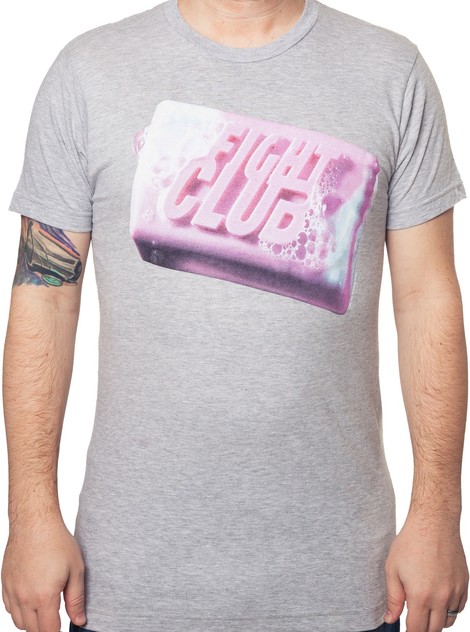 BUY
Fight Club Soap
Description: This tee pays homage to the movie Fight Club's famous Paper Street Soap Company. In the movie, Tyler Durden (Brad Pitt) sells the soap to department stores at $20 a bar. Little do the customers know that the soap is made from human body fat! The Narrator explains, "We were selling rich women their own fat asses back to them." The distressed design on this grey tee features an image of a fist surrounded by the name of the underground Paper Street organization. This Fight Club t-shirt is available in several different colors. Link to: Fight Club Soap 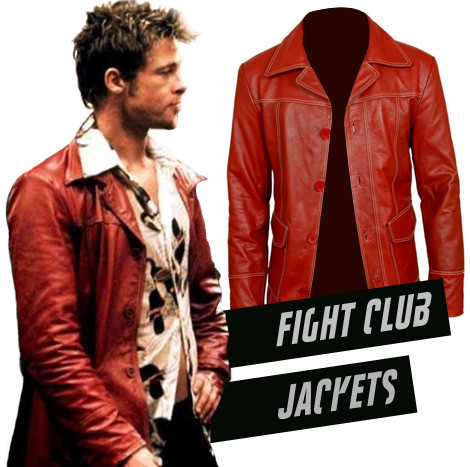 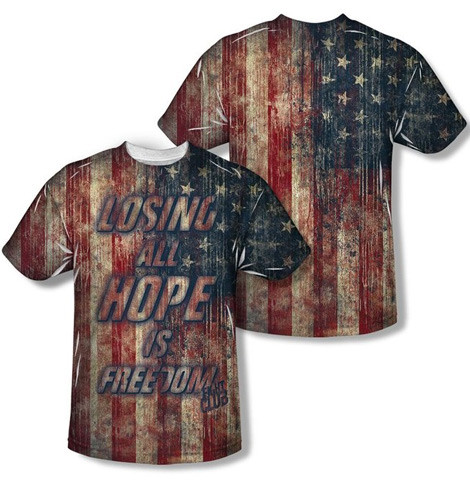 BUY
Fight Club Flag shirt
Description: The design on the left displays the Narrator's quote from the movie Fight Club. "Losing all hope is freedom." He realizes this freedom as he's hugging Bob. Browse a variety of Edward Norton quote tees including, "I am Jack's smirking revenge," and "I am Jack's complete lack of surprise." The shirt is available in a variety of sizes. Pair this quote T with Project Mayhem logo clothing. Link to: Fight Club Flag 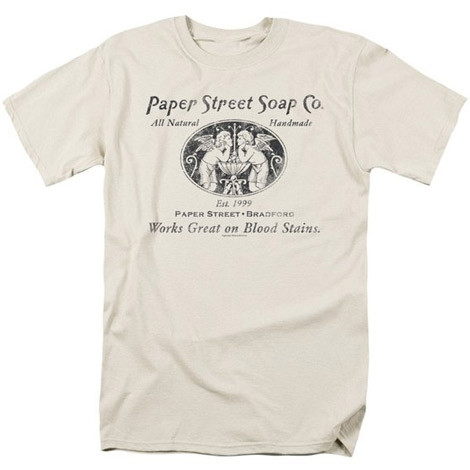 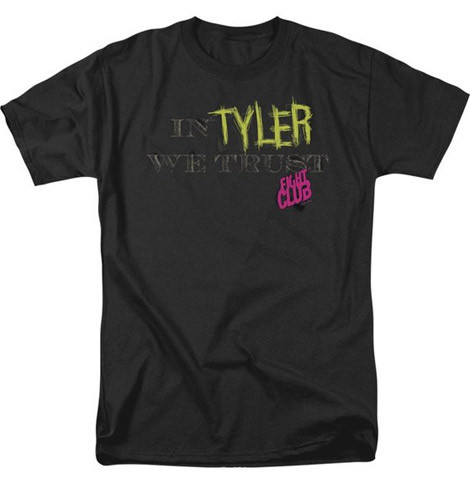 BUY
Fight Club In Tyler We Trust t-shirt
Description: Anyone familiar with Chuck Palahniuk's book knows that like the fight club, Project Mayhem is also governed by a set of rules, one of them being, "You have to trust Tyler." The front of this tee displays the motto, "In Tyler we trust". Of course, discussing this shirt could violate the first rule of Fight Club, "You do not talk about Fight Club." Available on a short-sleeve t-shirt, the design is a perfect way to express your loyalty. Link to: Fight Club In Tyler We Trust 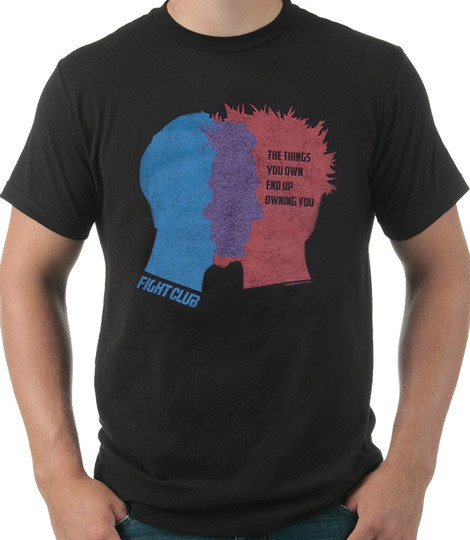 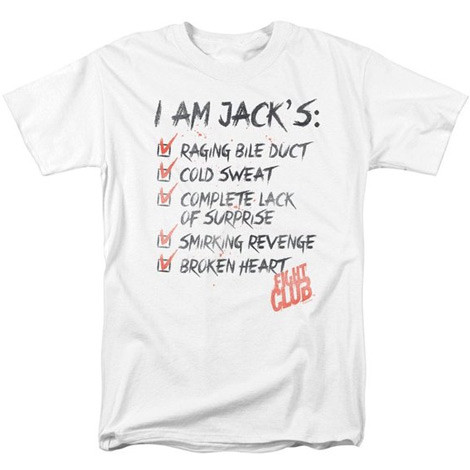 BUY
Fight Club I Am Jack's t-shirt
Description: Modeled after the series of articles Jack reads that were written about the first person perspective of a body part, this Fight Club shirt is a nod to those articles. Fellow fans may even begin to wonder if you work for Tyler Durden as a door-to-door soap salesman. Pair it with a Fight Club soap bar iPhone case, which also makes for a great conversation piece. It might not wash away you're own mischief and mayhem, but it looks great protecting your iPhone. They're perfect for fans of the movie and Chuck Palahniuk's books. Link to: Fight Club I Am Jack's