Originally titled The Babysitter Murders, John Carpenter's independent horror movie Halloween gave birth to the iconic villain Michael Myers, and it launched a franchise that is still garnering screams today. Here, we take a trip back to Laurie Strode's hometown of Haddonfield, Illinois (the movie was actually filmed in Pasadena, California), as we bring you a gallery of Halloween t-shirts. Our tee selection includes the popular clown face Michael Myers t-shirt and the bestselling Evil Never Dies Halloween movie t-shirt. Browse below for more Halloween movie merchandise, including scary Michael Myers costumes, movie hats, Halloween soundtracks, and fear inducing Michael Myers masks.
To buy a T-Shirt, click the image or link for store and size information. 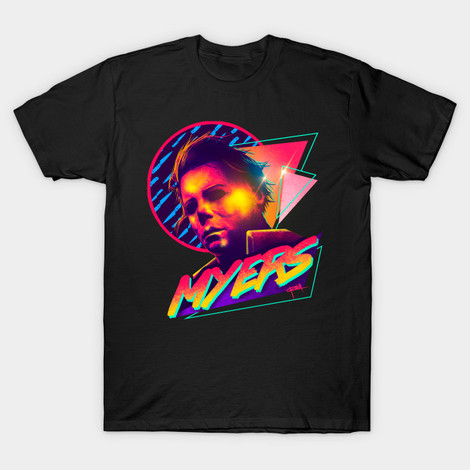 BUY
Michael Myers Retro t-shirt
Description: The front of this Halloween tee recalls the events of October 31, 1963, when young Michael Myers stabs his seventeen-year-old sister Judith with a kitchen knife. Director John Carpenter visited a real sanitarium in order to capture the vacant darkness that we see in young Michael's eyes. The fronts of these Michael Myers t-shirts include an image of Michael's face and the mask that he wears when he hunts his sister Laurie. This design is also available on long sleeve jerseys. Link to: Michael Myers Retro 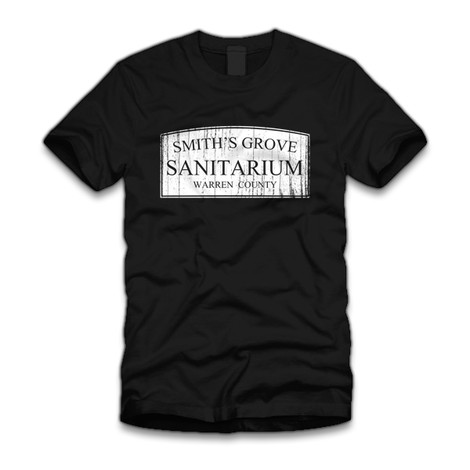 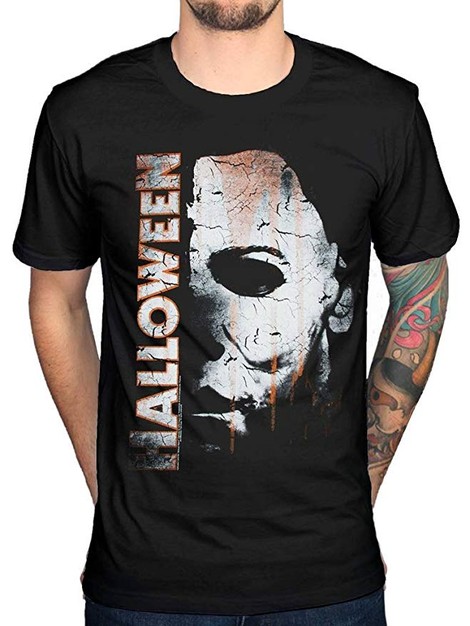 BUY
Michael Myers Mask and Drips t-shirt
Description: This design for the famous slasher movie features Haddonfield's resident butcher Michael Myers. He literally butchers the residents of the community with a kitchen knife. The front of this Michael Myers t-shirt displays his masked face, which still haunts many of the people in the Haddonfield area. The design on this Halloween tee also features the Halloween logo in orange font near the bottom. This piece of merchandise is available in men's sizes and is being sold by a limited number of stores. Link to: Michael Myers Mask and Drips 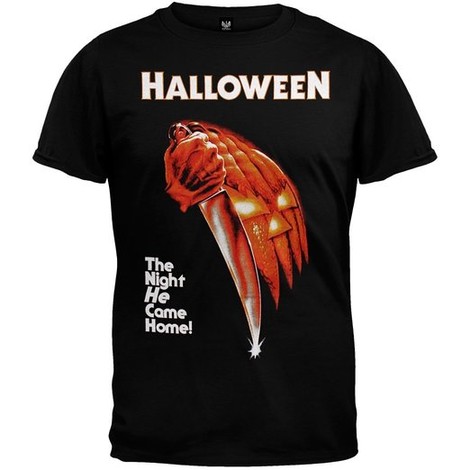 BUY
Halloween 1978 Poster Art
Description: This Halloween movie t-shirt displays the poster art from the movie, which reads, "The night he came home!" The tagline refers to the night that Michael came home to look for his sister, Laurie, who attends Haddonfield High School. Tell everyone that you went to high school with Michael Myer's sister Laurie Strode. The front of this poster style tee offers the perfect tribute to the classic 1978 horror movie. Purchase this design with other Halloween movie sweatshirts, hoodies, and hats. Link to: Halloween 1978 Poster Art 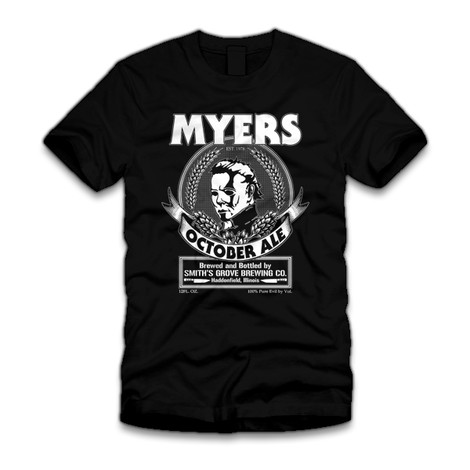 BUY
Myers October Ale t-shirt
Description: The design on the front of these dark Michael Myers t-shirts displays the head of The Shape (a.k.a. Michael Myers) as part of a fictional promo for Myers Ale, which is brewed and bottled by Smith's Grove Brewing Co. The cast and crew of the Halloween movies often refer to Myers' character as The Shape, because that's what he is called throughout the script for the 1978 movie. The original script refers to the character by name only twice, in the beginning and in the closing scene. Screenwriters John Carpenter and Debra Hill purposely did this, because Michael is faceless behind his disguise. Link to: Myers October Ale 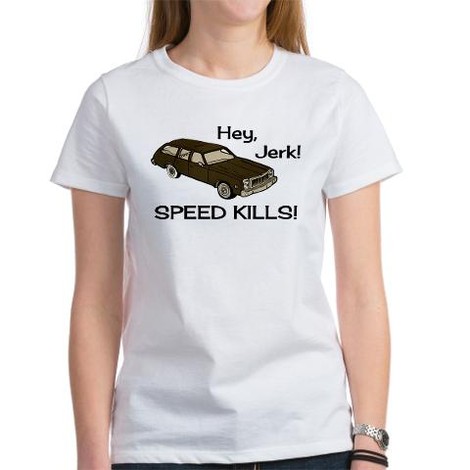 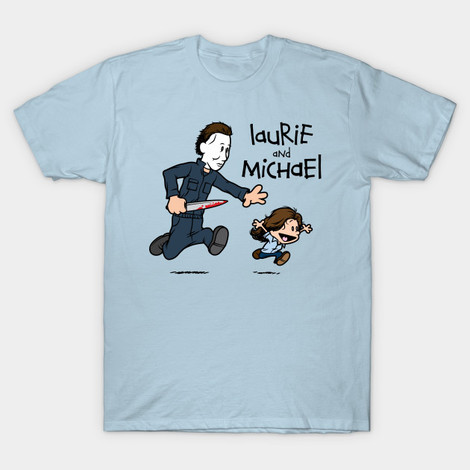 BUY
Michael and Laurie tee
Description: The Halloween tee above displays a Calvin and Hobbes parody. Michael Myers is chasing Laurie with a knife. They're not exactly two buddies. This funny Halloween Michael Myers t-shirt celebrates the legendary killer's weapon of choice, a kitchen knife. Michael indeed finds other creative ways to kill as well, including stabbing (not shooting) a victim with the barrel of a shotgun. This tee is perfect for horror fans and comic fans alike. Match it with a Halloween movie hat. Link to: Michael and Laurie 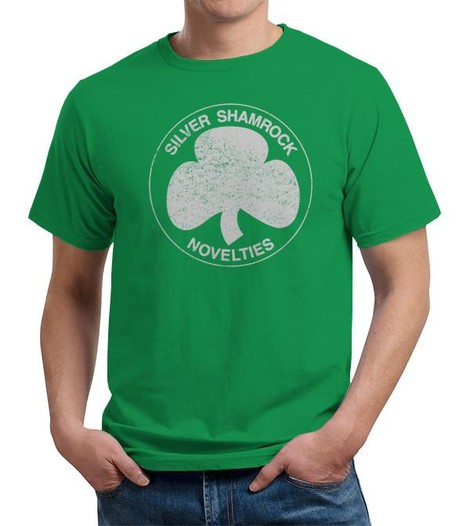 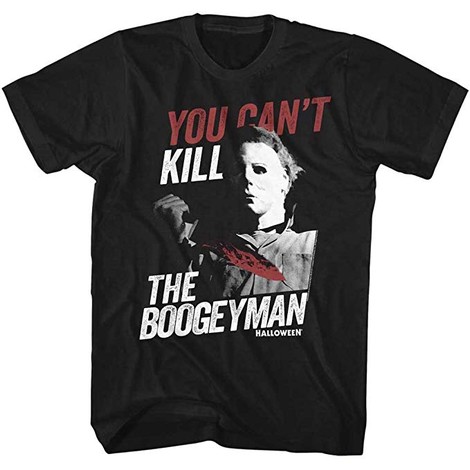 BUY
Halloween You Can't Kill the Boogeyman tee
Description: You can't kill the boogeyman, but he might spare your life in one of these Halloween tees. Nobody knows this better than Dr. Sam Loomis (Donald Pleasence), Michael Myers' psychiatrist. The front of this shirt displays Haddonfield's most notorious boogeyman. Also on this Halloween t-shirt is the movie logo. Buy this piece of Halloween movie merchandise with one of the Haddonfield High School Michael Myers t-shirts. Tell everyone that you and Loomis tried to kill the Boogeyman, but now he's back from the dead. Link to: Halloween You Can't Kill the Boogeyman 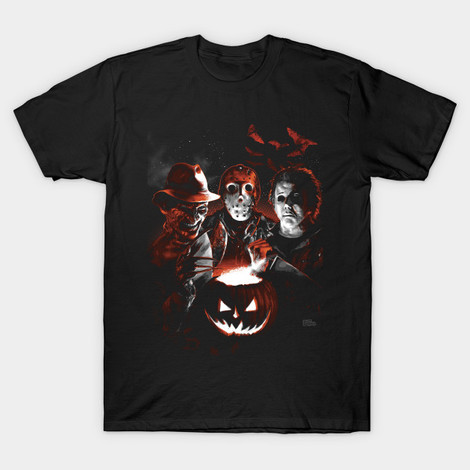 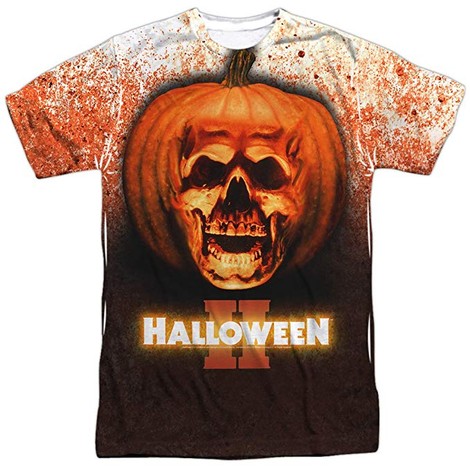 BUY
Halloween II Movie tee
Description: The front of this Michael Myers t-shirt advertises the follow-up, Halloween II. In this gruesome sequel Michael continues to hunt for his sister, Laurie Strode, in Haddonfield, Illinois. He begins his search at the hospital where Laurie was taken to recover from his first attack. As he looks for his sister, the corpses begin to pile up. Just make sure that you're not on Michael Myers hit list. Link to: Halloween II Movie 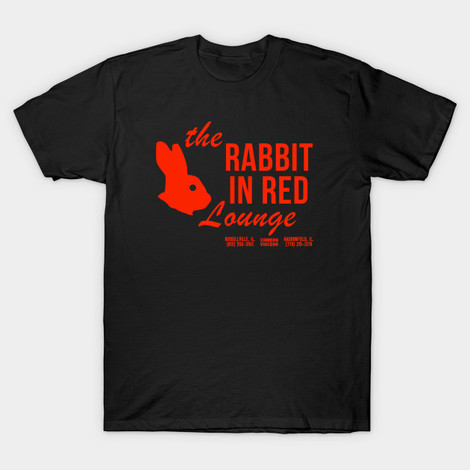 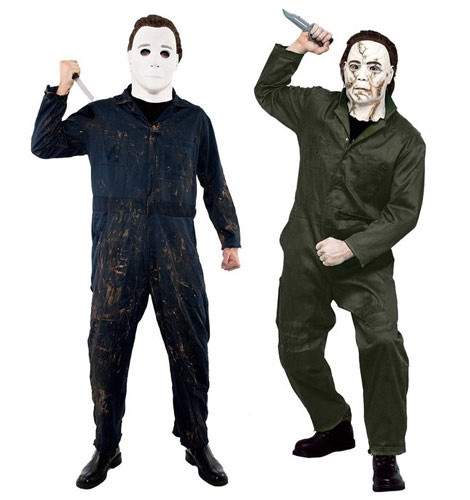 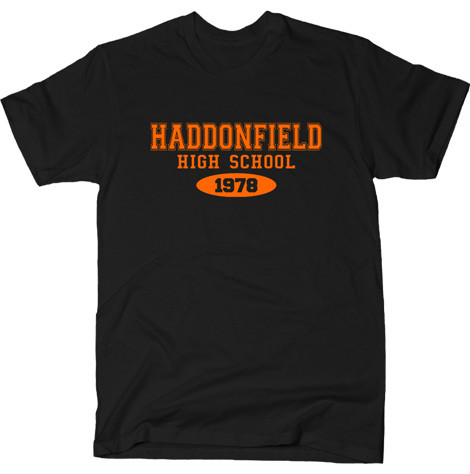