Heavy metal rocker Rob Zombie made a name for himself in horror films with the release of the 2003 movie House of 1000 Corpses and its 2005 sequel The Devil’s Rejects. The two follow the sadistic Firefly family, including patriarch Captain Spaulding, matriarch Mama Firefly and their brood, Baby, Otis, Tiny and Rufus, as they torture and kill anyone who crosses their path. If this clan is a part of your killer collection, peruse our gallery of Captain Spaulding t-shirts including the Hot Dog tee, Pigs is Beautiful shirt and Hamburger Eat Me t-shirt. Other House of 1000 Corpses clothing includes Tiny’s Cheap Ass Halloween Costume.
To buy a T-Shirt, click the image or link for store and size information. 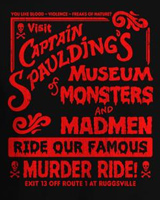 This Devil's Rejects shirt features a promo for Captain Spaulding's Museum of Monsters and Madmen. It's also a well-known location in the Rob Zombie movie House of 1000 Corpses. If you stop by for some gas and fried chicken, don't forget to take a spin on the famous Murder Ride. Remind others of the killer attraction that will surely take your breath away. Link to: Captain Spaulding's Museum 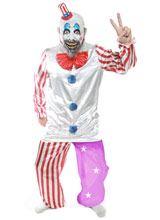 When a House of 1000 Corpses t-shirt isn't enough, this creepy Captain Spaulding costume will be. It is ideal for fans who dream of running their very own Museum of Monsters and Madmen complete with a Murder Ride. This offbeat roadside attraction lures people in with fried chicken and gasoline, but keeps them around with Otis’s crazy creations like the hairless monkey and crocodile boy exhibits. Sid Haig fans make sure to check out more House of 1000 Corpses shirt options like the Pigs is Beautiful t-shirt. Link to: Captain Spaulding Costume 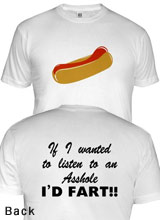 After soiling his clown costume with burglar blood, he sports a Captain Spaulding hot dog t-shirt like this one with the line, “If I wanted to listen to an Asshole, I’d Fart” on the back. This tee is also approved for giving tours through the Monster Ride and for drawing up directions to Dr. Satan’s tree for lost tourists. Legend has it that the doctor was hung by locals there after they found him experimenting with brain surgery. He had been trying to create a superhuman from the mentally ill. His body was nowhere to be found the following day. Link to: Captain Spaulding Hot Dog 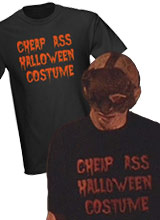 Some people say good things come in small packages but sometimes good things come in big packages. He may be named Tiny but he is huge, and when it comes to the family he is about as good as it gets, although that isn’t saying much. This Cheap Ass Halloween Costume t-shirt is like the one worn by Tiny when he decides to let his dolled up victim go free. If you are looking for more costume ideas, check out tees Captain Spaulding wore in the Rob Zombie movie House of 1000 Corpses. Link to: Cheap Ass Halloween Costume 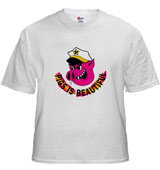 When it comes to inappropriate tees to wear while being questioned by the cops, this Pigs is Beautiful t-shirt worn by Captain Spaulding tops the list. As a matter of fact, most of the House of 1000 Corpses shirts would fit that description. This design featuring a snarling pig wearing a police cap can be used as a costume or simply as a humorous addition to your daily attire. Link to: Pigs is Beautiful 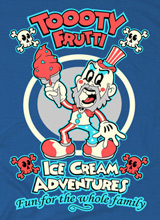 Who is your favorite Firefly? If your answer is a disturbingly grungy clown with a loony laugh then step right up. This Captain Spaulding t-shirt is for Rob Zombie fans like you that would pick Sid Haig’s character before the other Devil’s Rejects, including his striking blonde daughter Baby or vicious dismembering fiend boy Otis Driftwood. If you are looking to impersonate him, check out the Captain Spaulding Eat Me and Hot Dog shirts! Link to: Captain Spaulding Ice Cream 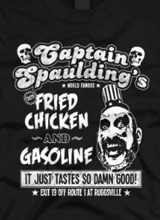 Which team are you playing for? If you are in the presence of Otis Driftwood, Baby Firefly, their gigantic brother Tiny and the rest of the psychopathic gang, then you better put on a Devil’s Rejects t-shirt like this one featuring Captain Spaulding's Fried Chicken and Gasoline. If you can’t beat them, which you can’t, then join them. It is the only true means of survival. Just agree that, "It just tastes so damn good!" Stop by and see 'em! Exit 13 off Route 1 at Ruggsville! Link to: Captain Spaulding's Fried Chicken 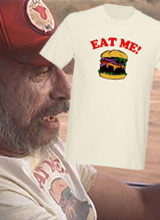 Just when Denise thought she had been lucky enough to escape the clutches of Dr. Satan and made it to freedom in the movie House of 1000 Corpses, she got picked up by the deranged Firefly patriarch. You can see Captain Spaulding’s Cheeseburger Eat Me shirt when he picks up the distressed young lady and drives her back to hell. No one escapes from The Devil’s Rejects and lives to tell the tale. Link to: Cheeseburger Eat Me 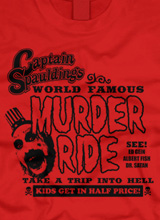 Captain Spaulding tees don't have to be scary but what fun would that be? This version is designed to remind tourists that the homicidal maniac has put his extensive knowledge of serial killers to good use through creating his World Famous Murder Ride. His laughing skull tie, patriotic clown costume and striped top hat almost make him seem lovable, but looks can be deceiving. He only loves his family members and you aren't one of them. Don't ya like clowns? If not, consider sporting Tiny's Cheap Ass Halloween Costume shirt instead. Link to: Murder Ride