Based on the Golden Globe winning British The Office TV show, the American version of The Office TV series stars comedian Steve Carell as Michael Scott, the regional manager of the Dunder Mifflin Paper Company's Scranton, Pa branch. Despite the first season of the TV show being comprised of only six episodes, fans became instantly hooked on the show's addictive humor and documentary style, with the actors often acknowledging the camera. Below, you will find the best The Office t-shirts handpicked from a variety of sellers. Design choices include the Gun Show Dwight Schrute t-shirt, the popular That's What She Said tee and the bestselling Dunder Mifflin t-shirt. Check out the other funny Office TV show quote tees. Pair them with cool Dunder Mifflin hats and bobbleheads.
To buy a T-Shirt, click the image or link for store and size information. 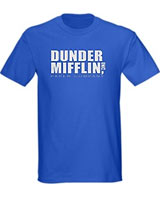 You can represent your favorite Scranton, Pa paper company with this official logo Dunder Mifflin The Office t-shirt. The front of the tee reads, "Dunder Mifflin Paper Company." If The Office TV series' interoffice romances, workplace pranks, and constant feuds remind you of your job, then this is the perfect T to wear on the next casual Friday. It may also help to inspire you to win Michael Scott's next Fun Run Race For The Cure. The Office TV show logo apprears in white on these blue tees. Link to: The Office Dunder Mifflin 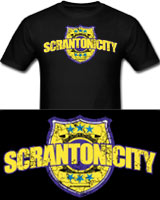 Scrantonicity is a band that features office accountant Kevin Malone (Brian Baumgartner). The band name is a portmanteau of Scranton, Pennsylvania and the 1983 Police album Synchronicity. The group is recognized as a Police cover band, making their first appearance on the show playing "Don't Stand So Close to Me" during the season two finale "Casino Night." This Scrantonicity Dunder Mifflin t-shirt is a great looking tribute tee to the band that also covers Sting songs. Link to: Scrantonicity Band 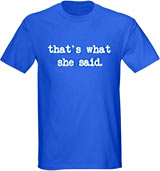 That's What She Said t-shirt

It's Michael Scott's (Steve Carell) favorite joke. For example, after accountant Kevin Malone (Brian Baumgartner) uses a paper cutter to trim the top off the oversized office Christmas tree, he asks Michael, "Why did you get it so big?" Michael replies, "That's what she said." Now you can display Michael Scott's favorite comeback on the front of this The Office That's What She Said t-shirt. Link to: That's What She Said 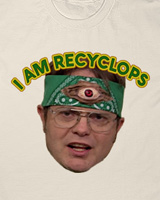 Dwight Schrute (Rainn Wilson) is the Assistant to the Regional Manager, Michael Scott (Steve Carell), on The Office TV show. He is also the environmentally conscious superhero known as Recyclops. The Office t-shirts shown here display Dwight in his Recyclops costume, ready to encourage others to be nice to the environment or else he will drown them in their over-watered lawns. The front of this Dwight Schrute t-shirt promotes the superhero Assistant to the Regional Manager at Dunder Mifflin, Scranton Branch. Link to: Dwight Schrute Recyclops 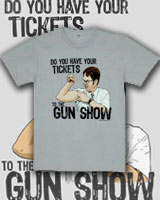 Do You Have Your Tickets to the Gun Show? 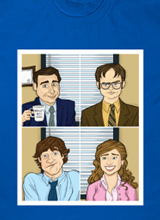 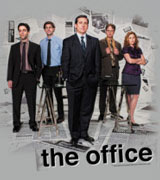 These grey The Office t-shirts are officially licensed dark Ts that display The Office TV series logo below a photo of Michael, Dwight, Pam, Jim and Ryan from the NBC television show. The memorable photo is an instant reminder of Dwight and Michael's petty behavior and zero productivity, which is all in a day's work at the paper company where they are employed. These tees are available in five different sizes. Link to: The Office Cast 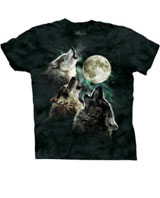 Dunder Mifflin Paper Company's Scranton Branch is home to the company's best employees, including the Assistant (to the) Regional Manager, Dwight Schrute, and his boss Michael Scott. If you thought your Dunder Mifflin t-shirts attracted attention, behold the magical powers of Dwight Schrute's Three Wolf Moon tee, which according to internet folklore will cause the wearer to be immediately approached by women. Dwight believes that its powers helped him to pick up Pam's best friend. Link to: Dwight Schrute Three Wolf Moon 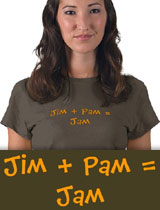 The Office tee shown on the left conveys your support for office romances. The design reads, "jim + pam" in bold orange font with an equals sign yielding the result "Jam". Similar to Tomkat and other celebrity name mashups, Jam signifies the strength of their office relationship. Just like jam, Jim and Pam make the TV show a little sweeter. Get one for yourself to celebrate the office romance between Jim Halpert (John Krasinski) and Pam Beesly (Jenna Fischer). The design on this Jim and Pam Dunder Mifflin t-shirt is available on other Ts. Link to: Jim and Pam 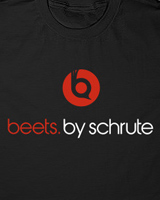 Celebrate Dwight's family's beet farm in the Beets by Schrute Office t-shirt shown on the left. Wear it as you utter Dwight Schrute's "fact" quotes from The Office TV show. "Fact: I am faster than 80% of all snakes." Dwight precedes his statements with the word "fact" when he is pointing out the obvious or telling his fellow coworkers various facts about himself. Dwight tells Michael Scott (Steve Carell), "Fact: You are drinking grape soda. You never drink grape soda. Fact: You are talking to Jim. You never talk to Jim." Link to: Beets by Schrute 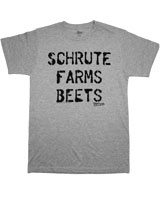 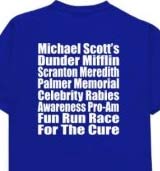 The Office Support the Rabid

These Office Dunder Mifflin t-shirts display the official logo for Michael Scott's race to support people with rabies. The tee reads, "Michael Scott's Dunder Mifflin Scranton Meredith Palmer Memorial Celebrity Rabies Awareness Pro-Am Fun Run Race For The Cure". A smaller version appears on the front. Match it with other Dunder Mifflin logo tees for the perfect gift for any The Office TV show fan. Link to: The Office Support the Rabid 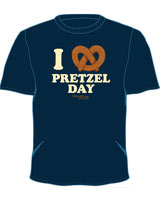 Let everyone know that you like Pretzel Day as much as Stanley Hudson. Wait in line with this Pretzel Day Dunder Mifflin t-shirt that commemorates the best day of the year, when the office hands out free pretzels. Enjoy the season three episode in your Pretzel Day tee and watch Dwight Schrute, Michael Scott and Stanley Hudson enjoy their doughy snacks at the Scranton branch of the paper factory. Next year Dwight is thinking of charging one Schrutebuck for each pretzel. Link to: Office Pretzel Day 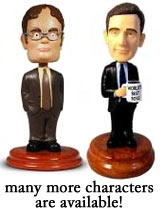 Adorn your desk with The Office bobbleheads to bring a smile to the faces of your fellow employees. Get the Pam Beesly and Jim Halpert bobbleheads so that you can reenact the romance between the two characters. Just make sure that the other employees aren't watching. Collect the whole cast or opt for unique individual characters like Andy Bernard, Creed Bratton, Darryl Philbin, Phyllis Lapin or Ryan Howard. Tell everyone that they're your employees. Link to: The Office Bobbleheads, Dwight Schrute, Michael Scott and Cast