The House TV show (also known as House, M.D.) is a medical drama that revolves around Dr. Gregory House (Hugh Laurie) and his team of diagnosticians at the fictional Princeton-Plainsboro Teaching Hospital. Dr. House acts as a medical Sherlock Holmes as he works with his team to successfully treat patients with baffling ailments. Here, we prescribe a dose of House t-shirts that will help to satisfy your addiction to the popular television show. Choose a Snakes on a Cane House TV show logo tee or the Everybody Lies Hugh Laurie Dr. House t-shirt.
To buy a T-Shirt, click the image or link for store and size information. 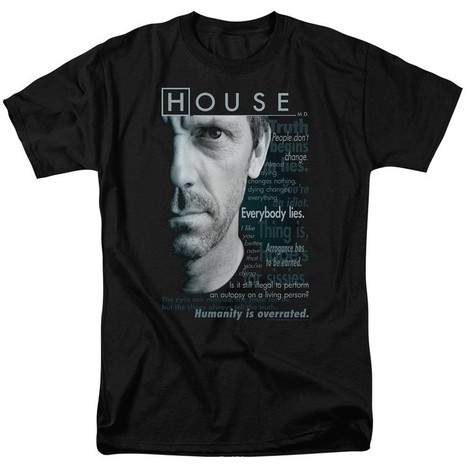 BUY
House M.D. Logo t-shirt
Description: This bestselling tee displays the House television show logo on the front along with popular quotes from the series. Similar quotes can be heard during exchanges between Dr. Gregory House (Hugh Laurie) and Dr. James Wilson (Robert Sean Leonard). "If you're dying, suddenly everybody loves you," says Dr. House. "You have a cane," replies Dr. Wilson, "nobody even likes you." House clarifies, "I'm not terminal, merely pathetic; you wouldn't believe the crap people let me get away with." This Fox House TV show logo t-shirt is perfect for casual fans of the TV series. Pair it with Snakes on a Cane tees. Link to: House M.D. Logo 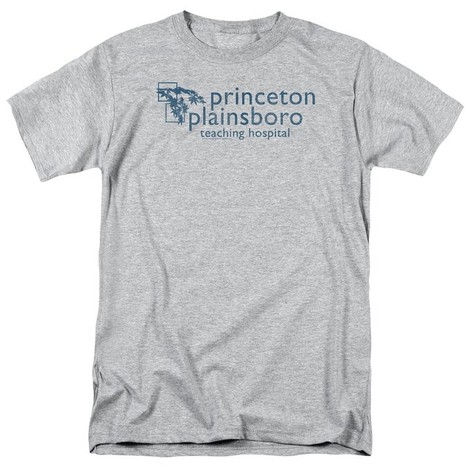 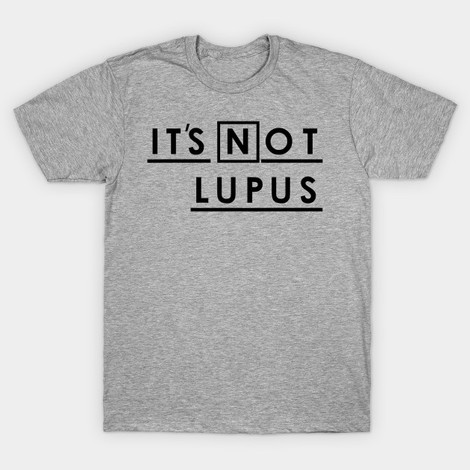 BUY
House It's Not Lupus tee
Description: The design on these House TV t-shirts displays the Dr. Gregory House quote, "It's not Lupus." He is referring to why he has a cane, which he uses as the result of an infarction in his quadriceps muscle some years earlier. The pain from his leg has led him to develop an addiction to Vicodin. "[The pills] let me do my job, and they take away my pain." His colleagues often encourage him to go to drug rehab. Link to: House It's Not Lupus 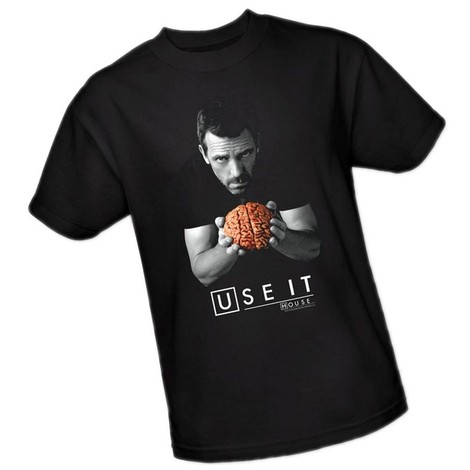 BUY
House M.D. Brain t-shirt
Description: This official House t-shirt features Dr. House holding a human brain with the instructions "use it" displayed underneath in the style of the Fox House TV show logo. The next time you develop a strange rash, you might find yourself at the Princeton-Plainsboro Teaching Hospital under the care of either Dr. James Wilson (Robert Sean Leonard), Eric Foreman (Omar Epps), or Allison Cameron (Jennifer Morrison). If they cannot quickly identify the cause of your ailment, expect to be seen by Gregory House, M.D. (he's the guy with the cane). Be honest with him, because he is convinced that "everybody lies." Link to: House M.D. Brain 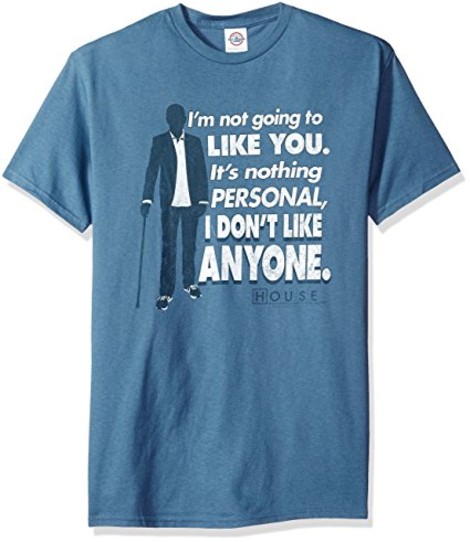 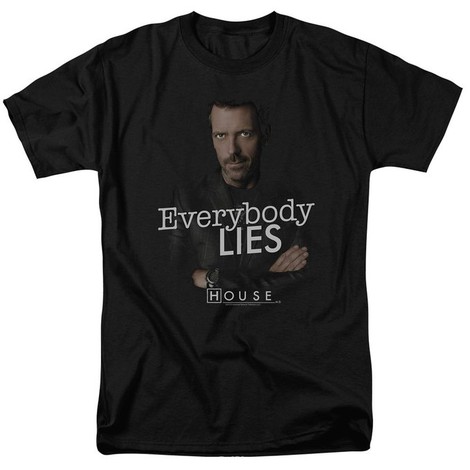 BUY
Everybody Lies House Quote tee
Description: The design displays the popular quote from the Fox House TV show, "Everybody lies." House M.D. uses the quote because he has learned that patients often lie about their symptoms and circumstances. During the team's deliberations, he will sometimes use variations of the quote, including, "The patient is lying," or "The symptoms never lie." This Everybody Lies House t-shirt celebrates the intelligent doctor's quote. Let this assumption guide you to your own diagnoses while watching the House television series. Link to: Everybody Lies House Quote 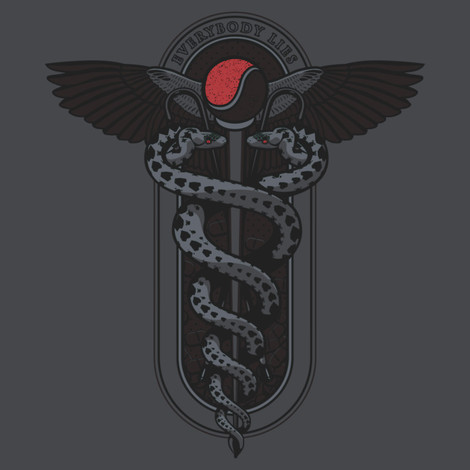 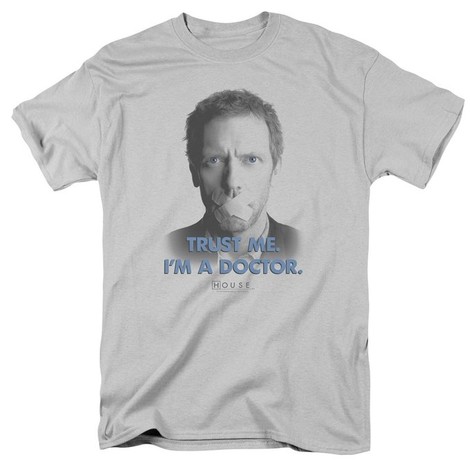 BUY
House Trust Me shirt
Description: Dr. Lisa Cuddy (Lisa Edelstein), the hospital administrator at Princeton-Plainsboro Teaching Hospital, often has to sign-off on risky medical procedures prescribed by Dr. Gregory House. As a result of House's distasteful bedside manner, Dr. Cuddy forces him to spend time treating patients in the hospital's walk-in clinic. She hopes that this will improve his interactions with his subjects. These Hugh Laurie House TV shirts display the eccentric doctor on the front, along with the text, "Trust me. I'm a doctor." This official tee also displays the House TV series logo. Link to: House Trust Me 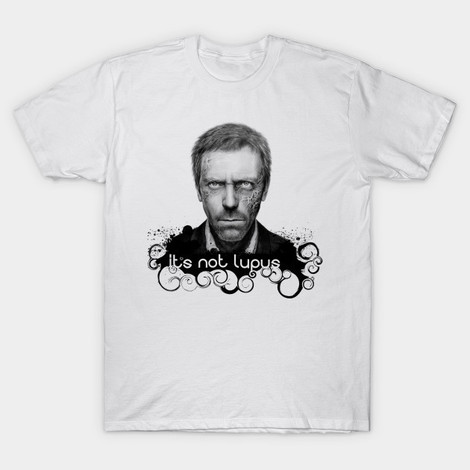 BUY
Dr. Gregory House t-shirt
Description: The front of this piece of Fox House TV show apparel features a silhouette style portrait of the genius doctor. The design shows his stern face staring intensely at the observer. One can only imagine what humorously sarcastic remark he is waiting to make. Fortunately, he directs most of his sarcasm at his patients and fellow doctors like Dr. Lisa Cuddy and Dr. Allison Cameron. He self medicates with various narcotic pain relievers so that he can do his job. This puts him and the audience in both a morally and ethically compromising position. Link to: Dr. Gregory House 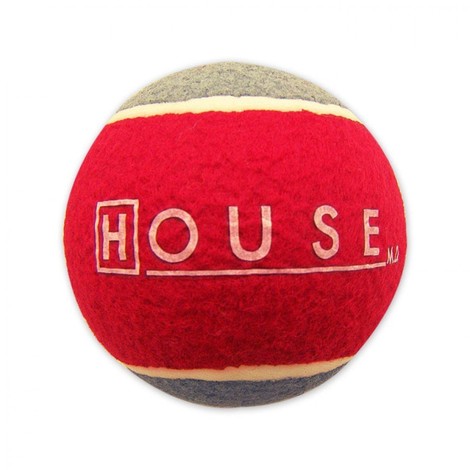 BUY
House Oversized Tennis Ball
Description: Dr. James Wilson (Robert Sean Leonard) is to House M.D. who Dr. Watson is to Sherlock Holmes. Dr. Wilson offers a much more caring, softer side than his counterpart. Dr. Gregory House is intrigued by the science involved in solving each case, and he often ignores the human side of the diagnosis. When he's stumped, he bounces his tennis ball off the wall. This House Tennis Ball lets you do the same. Pair it with a House M.D. t-shirt. While knocking on Doctor Wilson's door, House remarks, "I know you're in there... I can hear you caring." Link to: House Oversized Tennis Ball 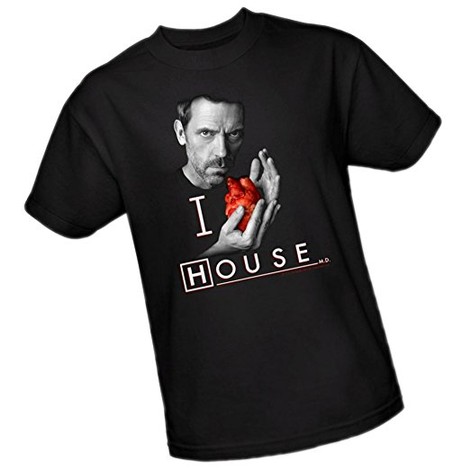 BUY
I Heart House tee
Description: Let everyone know that, like Dr. House, your supreme brainpower can sometimes cause unsavory side effects. The front of this House TV show t-shirt displays the declaration, "I heart house." The House TV series was inspired by Dr. Lisa Sanders monthly magazine column called Diagnosis. The show has been nominated for numerous awards, including the Golden Globe Award for Best Television Series. Link to: I Heart House 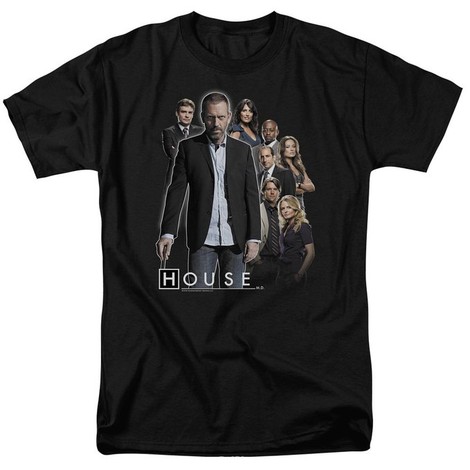 BUY
House Cast t-shirt
Description: "Normal's not normal, if you're not normal." This and other Gregory House M.D. quotes come to mind when recalling his interactions with the cast on these House t-shirts. The idea of what is "normal" is raised quite often on the show. Dr. Allison Cameron tells House, "It's normal to want to be normal." The characters often express their views on normalcy, because patients with symptoms and illnesses that aren't normal surround them. Link to: House Cast 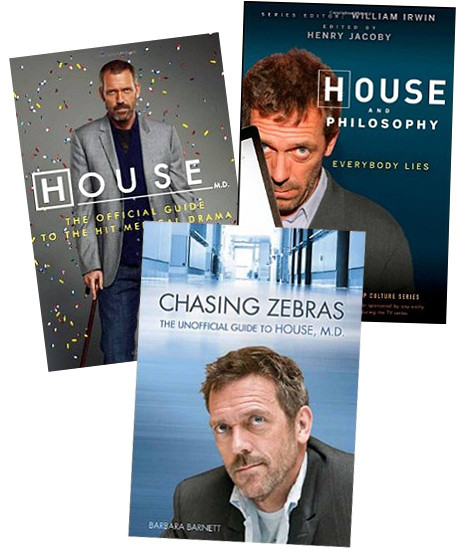 BUY
House M.D. Books - Medical Science Book, House and Philosophy
Description: Delve into the hit medical drama with these House, M.D. books. Start with author Henry Jacoby's bestseller House and Philosophy: Everybody Lies, which explores the philosophical issues that arise on the TV show. If you're more interested in the medical side of the drama, then pick up Andrew Holtz's two books that explore the fact and fiction behind the medical science seen on the show. For lighter fare, try the official guide to the TV series that includes a foreword by actor Hugh Laurie. Link to: House M.D. Books - Medical Science Book, House and Philosophy