The Judd Apatow produced Superbad movie tells the funny story of high school seniors Evan (Michael Cera) and Seth (Jonah Hill), two socially inept best friends. Seth and Evan attempt to obtain alcohol for a party where they hope to lose their virginity to Jules and Becca, the two girls who they have crushes on respectively. Rock out like gangstas with our selection of popular Superbad t-shirts displayed below. The designs include movie quotes like the legendary I Am McLovin t-shirt and the humorous Mister Phuck Superbad t-shirt. Celebrate the humorous ways of Seth, Evan, and Fogell, who try to secure alcohol with Fogell's fake ID, which contains only the name "McLovin." Don't stress, because Slater (Bill Hader) and Michaels (Seth Rogen) of the Clark County Police Department have your back.
To buy a T-Shirt, click the image or link for store and size information. 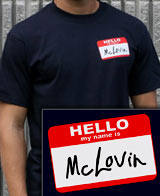 The front of this Superbad tee displays a natural looking red and white McLovin nametag. The name on the tag appears as if it was written with a black Sharpie. Available in six different sizes, the design on this tee gives you the chance to represent the future cult comedy classic. Whether you can relate best to Seth, Evan, or Fogell, this design along with the Superbad movie poster art tee below is the perfect movie merchandise combo. Wear it with related Superbad hats. Link to: Superbad McLovin Name Tag 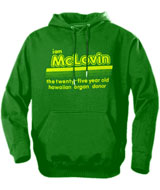 I Am McLovin Hoodie

The lime design on this bestselling McLovin hoodie is comprised of a logo featuring the text, "I Am McLovin, the twenty-five year old Hawaiian organ donor." Lime bars underline the text, adding to the hoodie's popular appeal. Wear it over the identical Superbad t-shirt whenever you feel neurotic like Fogell, or if you plan to become a 25-year-old Hawaiian organ donor. Browse through to see the women's version which is equally appealing. Link to: I Am McLovin Hoodie 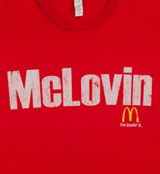 This McLovin McDonald's style tee lets everybody know that you're from the islands. Match it with the popular Iron Chef Superbad t-shirt that displays Seth's funny Iron Chef Superbad quote on the front. The quote is heard when Seth is bragging about his future sexual reputation at college, "By the time college rolls around I'll be like the Iron Chef of pounding..." Please note that this Superbad merchandise item will not help to score you beer. Link to: Superbad McLovin McDonald's 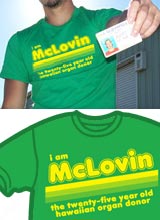 I am McLovin, the 25-year-old Hawaiian Organ Donor

The front of the retro style tee shown on the left displays Fogell's "I am McLovin" quote from Superbad. The yellow design on the green T provides a retro style effect akin to video games from the late nineteen seventies. Three yellow bars that fade out down the chest of the tee underline the yellow text. Underneath the bars is the tagline, "the twenty-five year old Hawaiian organ donor." This I am McLovin t-shirt is available in both men's and women's styles in a variety of sizes. Link to: I am McLovin, the 25-year-old Hawaiian Organ Donor 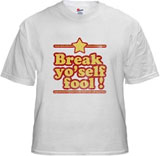 Some of the best Superbad quotes are delivered by Fogell (a.k.a. McLovin). The fronts of these Superbad t-shirts feature the funny movie quote, "Break yo'self fool!" Fogell says this as he's shooting Slater and Michaels' cop car. The two officers let Fogell shoot the car after the three of them go joyriding and set the car on fire with a Molotov cocktail. Link to: Break yo'self fool! Superbad 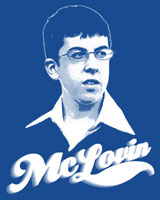 The cursive design on the front of this blue McLovin tee presents a 3D style logo, representing Fogell's alias. The name "McLovin" appears as if it is raised up off the surface of the tee. The bottom tail on the letter 'L' underlines the latter portion of the name. Wear it to the next party that you attend. Just don't promise anyone that you'll get them alcohol. This Superbad t-shirt is available in both men's and women's styles. Link to: McLovin 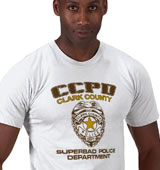 These Clark County Police Superbad tees pay tribute to Slater (Bill Hader) and Michaels (Seth Rogen), Clark County's finest. After witnessing a robbery, the officers question Fogell, who is terrified that they are going to discover his fake ID. Instead, they laugh at the fact that he is an organ donor. See matching Superbad hats and merchandise. Link to: Superbad Clark County Police Department 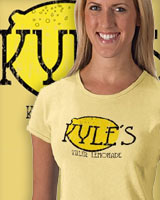 This Kyle's Killer Lemonade t-shirt promotes the beverage that Jule's friend asks Seth to get her. Seth acquires the alcohol with the help of Fogell's fake id, which can also be seen on the Superbad movie poster art. This tee is perfect for anyone who walks around saying things like, "I am McLovin," and "Chicka chicka yeyeah!" For the perfect gift, purchase this with an I am McLovin t-shirt and Superbad poster art. The one-sheet movie poster features Seth and Evan behind the movie logo. Link to: Superbad Kyle's Killer Lemonade 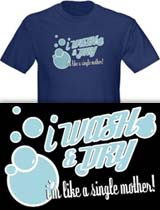 "Chicka chicka yeyeah!" is a popular quote from Superbad. Fogell says it in his excitement at school after he tells Seth and Evan that he's going to pick up his fake ID during lunch. Fogell tells Seth and Evan this when he visits them in home-ec, where Seth is working alone, prompting him to say to his teacher, "I wash and dry; I'm like a single mother." Seth's quote from home-ec is displayed on the front of the tee shown on the left. Also, look for Superbad t-shirts featuring Fogell's "Chicka chicka yeyeah" quote on the chest. Link to: I Wash & Dry - I'm like a single mother! 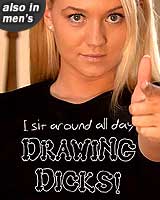 I Sit Around All Day Drawing D*cks tee

When Seth was in the fourth grade, he would sit around all day drawing pictures of d!*ks. He confesses this to Evan during lunch, as he tries to explain why he doesn't like Becca, whom Evan is interested in dating. He tells Evan that Becca had seen one of his gross drawings, which caused her to tell the principal, who then told his parents. This dark Superbad t-shirt displays Seth's quote, with part of the text made up of adult themed shapes. Link to: I Sit Around All Day Drawing D*cks 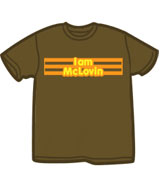 Retro I am McLovin tee

These attractive seventies style McLovin t-shirts display Fogell's alias across the chest. The yellow text on the tee features an orange border. The design blends perfectly with the brown color of the apparel's fabric. Behind the "I am McLovin" quote, is a striped design that adds to the retro appeal. This McLovin t-shirt is a great gift to pair with a movie poster or the drawings book featured below. See similar designs on other merchandise, including Superbad hoodies and hats. Link to: Retro I am McLovin 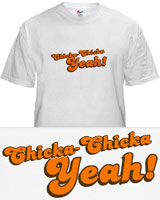 "Chicka chicka yeah!" is a popular quote from the movie Superbad. Fogell says it in his excitement at school after he tells Seth and Evan that he's going to pick up his fake ID during lunch. Seth and Evan then decide to invite Fogell to the party that Jules told Seth about, since Fogell can now score them some booze. Fogell replies, "Sure about the booze," and tells them that they're going to "party, and get crunk, and rock out." These Superbad tees feature Fogell's "Chicka chicka yeah" quote on the chest. Link to: Chicka Chicka Yeah! Fogell 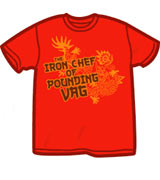 These popular Iron Chef Superbad t-shirts display Seth's funny Iron Chef Superbad quote on the front. The quote is heard when Seth is bragging about his future sexual reputation at college, "By the time college rolls around I'll be like the Iron Chef of pounding vag." This tee lets everybody know that you are a master like Seth ...and we don't mean at cooking. Match it with Superbad hats and sweatshirts. Contains a mature theme. Link to: Iron Chef Superbad 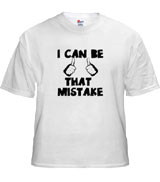 I Can Be that Mistake Superbad tee

The design on this tee eludes to Seth's funny Superbad quote, "You know when you hear girls say 'Ah man, I was so sh*t-faced last night, I shouldn't have f**ked that guy?' We could be that mistake!" The front of this light blue McLovin Superbad t-shirt displays the quote in black text, with an image of two thumbs pointing back at the wearer. Seth delivers this line when he's talking to Evan outside during Evan's gym class. Link to: I Can Be that Mistake Superbad 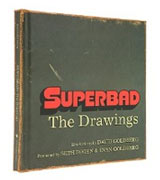 Anyone who has seen the movie is aware of Seth's notorious grade school drawings that Becca had caught a glimpse of. Yes, Seth used to sit around all day creating what has become known as "phallographics". Get your hands on this compilation of 62 hilarious phallic drawings that were created specifically for the film. Seth's Superbad drawings were actually done by David Goldberg, the brother of Evan Goldberg, the movie's co-writer and producer. Link to: Superbad Seth's Drawings Notebook