Stephenie Meyer's Twilight book series took the world by storm with vampires, werewolves and love. Devoted readers have not stopped there. They've made Twilight the movie a box office hit. We love the characters of Edward Cullen, Bella Swan and Jacob Black, played by actors Robert Pattinson, Kristen Stewart and Taylor Lautner. Get your fill of New Moon merchandise with our collection of New Moon t-shirts, including the Jacob Black t-shirt and La Push tees. Wear Twilight jewelry like the Alice choker Twilight necklace and the Rosalie pendant necklace.
To buy a T-Shirt, click the image or link for store and size information. 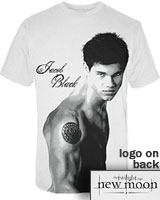 The much anticipated Twilight movie sequel, New Moon, is bound to impress fans from around the world. This New Moon t-shirt features the devoted werewolf Jacob Black (Taylor Lautner) from the movie, who competes against vampire Edward Cullen (Robert Pattinson) for the love of Bella Swan (Kristen Stewart). This New Moon tee will have you ready to run to the nearest movie theater before you can say, "Volturi". Put it on to listen to the Twilight music box or to stare at the movie poster art. Link to: Twilight New Moon Jacob 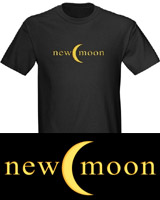 If your friend jumped off a bridge, would you do it too? Well, Bella probably would but we can't blame her. Life-threatening acts like cliff diving do seem more appealing when it results in hearing voices from your long lost love. In a desperate attempt to have contact with Edward, Bella takes up cliff diving at La Push beach with Jacob Black and his Quileute friends. Order this New Moon logo tee with a werewolf La Push t-shirt to celebrate Bella's daring adventures. Wear it to play Twilight board games. Link to: New Moon Crescent Logo 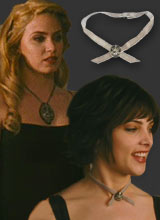 Official Twilight jewelry featuring the Cullen crest is the perfect addition to any collection of New Moon merchandise. These pieces are subtle enough to be worn everyday but recognizable enough to perfect a Cullen costume. Alice's choker necklace and Rosalie's pendant necklace can be seen throughout Twilight and New Moon, including at Bella's birthday party. Join the Cullen clan and become Alice (Ashley Greene) and Rosalie's (Nikki Reed) sister by grabbing one of these official Twilight necklaces today. It is like a dream come true...together forever with Edward Cullen. Link to: Alice and Rosalie Necklaces 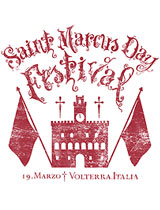 Most people can cope with the loss of a loved one but not Edward Cullen. After being misinformed that Bella has jumped to her death, Edward decides that death is his only option. He flees to Italy to provoke the Volturi into killing him, but Alice and Bella understand the mistake and rescue him before it is too late. This Volturi t-shirt is a reminder of their heroic actions in the New Moon movie and book against the Volturi coven members, including Jane (Dakota Fanning), Caius, Marcus, Aro and Alec. Link to: New Moon Saint Marcus Day Festival 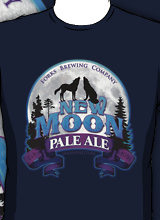 These creative Pale Ale New Moon t-shirts let everyone know that you're not concerned with the love between Edward and Bella, or the advances of the werewolf Jacob Black, who is a member of the Native American Quileute tribe located in La Push. You just want to relax with a refreshing glass of New Moon Pale Ale produced by the Forks Brewing Company. Inspired by the New Moon book, movie, and Edwards "pale" skin, pair this Forks Beer tee with a Team Jacob t-shirt so we don't forget Bella's selfless protectors. Collect it with the Twilight music box. Link to: New Moon Pale Ale 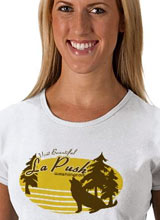 Deciding where to go for you next vacation? Visit beautiful La Push, Washington! Made famous by Stephenie Meyer's Twilight book series, La Push is not only perfect for surfing, whale watching and cliff diving, but it is also very safe. As you may know from the New Moon movie, members of the Quileute tribe protect the area from evil vampires like Laurent (Edi Gathegi), which allows the community to enjoy the nearby beach. The front of this La Push New Moon shirt promotes the town by displaying a silhouette of a howling werewolf. You can always count on Jacob Black to save you. Link to: Visit La Push 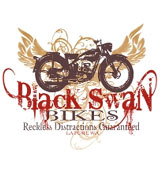 Since cliff diving is not a convenient way to summon voices from Edward, Bella had to find a more practical activity, like riding motorcycles. These New Moon tees are a tribute to friends Bella Swan (Kristen Stewart) and Jacob Black (Taylor Lautner), who take up the hobby of being daredevils. One phrase can sum up this Black Swan Bikes shirt, the motto, "Reckless Distractions Guaranteed". Wear it with your Twilight jewelry collection. Link to: Black Swan Motorcycles 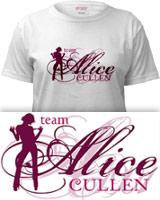 The design on this piece of clothing promotes Team Alice, the Cullen family member featured more in the Twilight sequel New Moon, even though the movie's focus shifts from the Cullen family vampires of Forks to the Quileute tribe werewolves of La Push. Match this Team Alice Cullen tee with a La Push wolves werewolf shirt to celebrate Team Jacob. Purchase it with Bella Swan's dress from New Moon, which she wears to her party at the Cullen's. Wear the dress with the Alice choker Twilight necklace. Link to: Team Alice 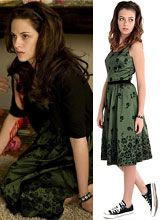 Outfit yourself in Bella's birthday dress when you're not dressing more casual in your Edward or Jacob t-shirt. Attract the attention of Forks vampire Edward Cullen (Robert Pattinson) and the La Push werewolf Jacob Black (Taylor Lautner). Jacob is part of the Quileute tribe, which has a treaty with the Cullen family that states that the Cullens are not allowed to bite any humans. Jacob provides a shoulder for Bella (Kristen Stewart) to lean on after Edward leaves. Purchase the dress with New Moon t-shirts that celebrate Bella's protectors, Edward and Jacob. Buy it with the Twilight board game. Link to: New Moon Bella's Birthday Dress 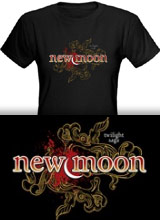 In Stephenie Meyer's Twilight books Jasper is the husband of Alice and the adopted son of Carlisle and Esme. Before being adopted by the Cullens, Jasper was a high ranking member of the Confederate States Army during the Civil War. In the New Moon movie, Jasper attacks Bella after she gets a paper cut, prompting the Cullen family to flee Forks in order to protect Bella. This attractive New Moon t-shirt displays a stylish filigree style logo for the vampire movie. Wear it with a Rosalie pendant necklace for an alluring vampire New Moon merchandise combination. Link to: New Moon Logo 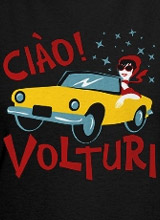 The Volturi are a coven of vampires who reside in Volterra and are considered royalty because they have lived over three thousand years. Their job is to enforce the rule that vampires keep their secret from humans. Upon discovering that Bella Swan knows about the existence of vampires, at the end the New Moon book the Volturi order that she either be killed or transformed into a vampire. Actress Dakota Fanning portrays the Volturi vampire Jane in the movie. Wear this Volturi t-shirt as you listen to your Twilight music box while trying on your Twilight jewelry pieces like the Alice choker necklace. Link to: Alice New Moon Ciao! Volturi 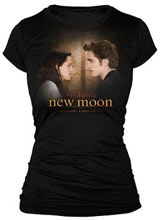 Fans of Stephenie Meyer's Twilight novels are well aware of the story behind the New Moon movie featuring the werewolf Jacob Black and the vampire Edward Cullen. Celebrate the second book but be careful not to make Jacob Black jealous with this Edward and Bella Swan design. However, you could always comfort him as he deals with his unreciprocated love for Isabella "Bella" Swan, the lamb to Edward's lion. Bella and Edward share a forbidden love that is tested when Edward leaves her. Pair this piece of merchandise with the New Moon tees that feature poster art from the movie. Link to: Edward and Bella