The Dexter TV show is a Showtime crime drama series based on the Dexter books by Jeff Lindsay. The show follows Dexter Morgan (Michael C. Hall), a forensic specialist turned serial killer determined to bring justice to those who have slipped through the cracks. Since his police officer father, Harry Morgan (James Remar), taught him how to act normal, Dexter has no problem getting away with his devilish deeds despite being surrounded by police all day. If you want to stay on his good side, check out our Dexter merchandise including Dexter t-shirts, action figures, a board game, Dexter bowling shirts and costumes.
To buy a T-Shirt, click the image or link for store and size information. 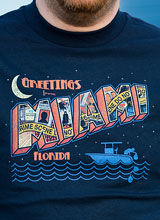 Greetings from Miami, the home of Dexter Morgan who is the city's crime fighting serial killer. This shirt offers an impressive postcard style design that brings together well-known elements from the Showtime TV show. Filling the letters are drawings of Dexter's weapons, his syringe, a silhouette of the Dark Defender and an image of the Miami Chills ice delivery truck. Fellow fans will enjoy exploring the design for more trademark Dexter elements. Of course, we can't ignore the blue silhouette of the Slice of Life boat near the bottom. Link to: Greetings from Miami 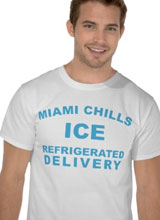 If you are a fan of Dex, then you'll remember one of his most challenging cases, the notorious Ice Truck Killer. While the neatly butchered bodies seemed chaotic to the police, his close relation to the killer put him on the right path. After following the Miami Chills refrigerated truck, he knew he was onto something. Grab this Miami Chills Dexter t-shirt or check out the book Darkly Dreaming Dexter by Jeff Lindsay on which season one is based. Link to: Miami Chills Ice 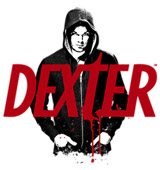 Dexter Morgan may appear normal and blend in with society, but in reality, he is unlike most others. After witnessing his mother's gruesome murder, he grew void of human emotion. While killing animals was enough to satisfy him as a youth, it was his father who convinced him that his desires could be used for good. This Dexter tee captures his urge to kill. Now capture your urge to grab this tee today. Link to: Dexter Logo 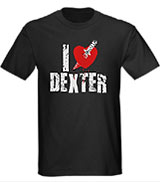 If you wish you could have a man like Dexter, keep dreaming. This witty perfectionist serial killer only goes for damaged women like his girlfriend Rita Bennett (Julie Benz). Luckily for her, he is able to clean up some of her life's messes, including her abusive drug addict ex-husband Paul (Mark Pellegrino). Show your love for Dex or the Showtime TV show itself with I Love Dexter t-shirts. Wear it to play with your Dexter board game and figures. Link to: I Love Dexter 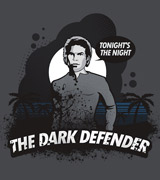 While most people would be upset by a new serial killer on the loose, some had a change of heart after seeing that the bodies were of killers themselves. The Bay Harbor Butcher, in some people's eyes, was doing a good deed. One of these people created a comic book character in his honor called The Dark Defender. Show your support with this Dark Defender Dexter t-shirt. It looks great under the Dexter bowling shirt and serial killer costumes. Link to: Dark Defender 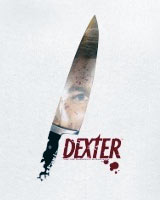 After injecting his victims with a powerful animal tranquilizer and wrapping them up in cellophane, Dexter (Michael Hall) uses a wide variety of devices, including power drills and knives, to torture the sinners. His adoptive father, Harry Morgan (James Remar), taught him how to elude police, including his sister Debra (Jennifer Carpenter). Nab any of our killer Dexter tees to knock the socks off fellow fans. For those who have not seen it, encourage them to check out Showtime Dexter DVDs. Link to: Dexter Knife 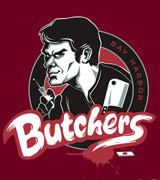 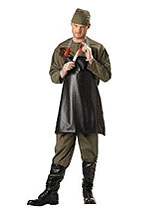 Whether you think Dexter Morgan is the world's scariest serial killer or the greatest serial killer, this Dexter costume is for you. It doesn't matter if you think his deeds are good for killing killers or bad for being a killer himself, this is a great costume that is sure to impress. If you have no need for a costume at the current time, then keep perusing our gallery of Dexter t-shirts, action figures and merchandise. There is bound to be something to catch your eye, whether it is for yourself or a significant other. The Dexter board game is an option you both can enjoy. Link to: Dexter Costume 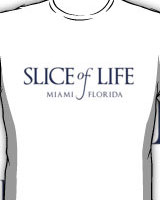 These Dexter tees highlight the vessel he uses to transport his victims to their ocean burial, his perfectly named boat the Slice of Life. It seems like he thinks of everything, from the rubber sheets and glass slides to the creative boat name. It all works until treasure hunters discover his grisly burial grounds. This tee is available in a variety of colors and styles sure to fit anyone's taste, so grab one for yourself and one for the boating Dexter Morgan (Michael Hall) fan in your life. Wear it under your Dexter bowling shirt that let's everyone know you're ready to bowl till you bleed. Link to: Slice of Life 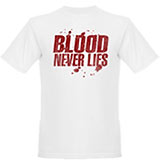 In the words of Dexter himself, "Blood never lies." He is able to determine from the trail of blood if the damage was done by an amateur or a professional, whether it was quick or slow, planned or in defense, as well as what weapon was used. This piece of Dexter clothing will remind you of his life as a forensic blood splatter analyst for the police department, rather than his life as a serial killer. Link to: Blood Never Lies 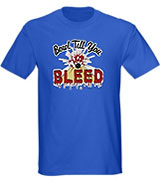 Bowl Till You Bleed t-shirt

There is no better way to appear normal than to be on a bowling team, at least that's what Dexter Morgan thinks. This Dexter t-shirt features the logo and saying "Bowl Till You Bleed" from the back of the police team's bowling jerseys. We chose to show it here in blue, which is similar to the real Dexter bowling shirts featured on the TV show. However, this clothing item is available in a variety of other colors that may interest you. Link to: Bowl Till You Bleed 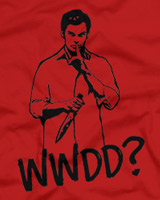 What Would Dexter Do? t-shirt

If you encounter a criminal like the Ice Truck Killer, consider asking yourself, "What would Dexter do?" This Dexter tee features the recognizable forensic specialist holding a bloody knife. He is encouraging his criminal victim not to scream. If you want to see exactly what Dex would do, check out the episodes of each season of the Dexter TV show on DVD. Also, play out the character's scenes with Dexter board games and action figures below. Link to: What Would Dexter Do? 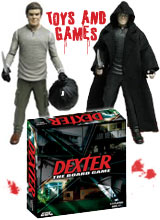 Dexter Action Figures and Board Game

Celebrate your favorite serial killer with these seriously appealing Dexter figures, including the coveted Comic Con Dark Defender action figure based on the comic book created on the TV show. You'll also find an assortment of killer bobbleheads for various characters, including his sister Debra Morgan, Sgt. Doakes, Vincent Masuka and the Trinity Killer. If you have more of a competitive nature, pick up the Dexter Board Game for hours of deadly fun. Link to: Dexter Action Figures and Board Game