The movie A Christmas Story has become a holiday tradition, in part due to the 24 hour marathon that airs each year on Christmas Eve. Peter Billingsley stars as 9-year-old Ralphie Parker, a boy who wants one thing for Christmas, an official carbine-action Red Ryder BB gun. His hopes are thwarted after he is repeatedly warned, "You'll shoot your eye out kid." We triple dog dare you to browse our selection of A Christmas Story t-shirts. Order a Christmas Story leg lamp t-shirt, or purchase a real leg lamp and let everyone know that "it's a major award."
To buy a T-Shirt, click the image or link for store and size information. 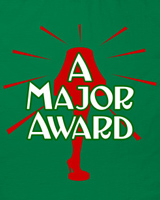 What is the name of The Lone Ranger's nephew's horse? This is the trivia question that appears in The Old Man's (Mr. Parker's) newspaper. He ends up winning the leg lamp after Ralphie's mom gives him the right answer. He proudly displays the leg lamp in his window, which prompts his neighbor to ask, "What is that?" The Old Man replies, "It's a Major Award!" Order a real Christmas Story leg lamp below. Be careful, they're "fra-gee-lay." Link to: A Major Award Leg Lamp 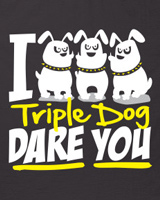 I Triple Dog Dare You tee

Celebrate the time-honored triple dog dare that Schwartz issues to Flick with regard to sticking his tongue to a frozen pole. This isn't the only classic moment. In the movie A Christmas Story, Ralphie's father accidentally knocks a hubcap full of lug nuts from his son's hands, prompting Ralphie to utter the queen mother of dirty words, the "f-dash-dash-dash" word. Due to the movie's PG rating, we hear Ralphie say "Oh fudge" instead. Pair this triple dog dare tee with an Oh Fudge Christmas Story t-shirt that displays the Ralphie quote from the movie. Link to: I Triple Dog Dare You 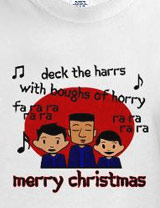 "Deck the harrs with boughs of horry" in this tee that celebrates the Parker family's outing to the Chop Suey Palace. It was the only restaurant that was open after the Bumpus' dogs devoured their Christmas turkey. The experience turned out to be quite entertaining. They watched the host chop off the head of their cooked duck (Chinese turkey), and they listened to three employees serenade them with an imperfect rendition of "Deck the Halls". Sing along in this Fa Ra Ra Ra Ra shirt that celebrates this humorous scene. Link to: Fa Ra Ra Ra Ra 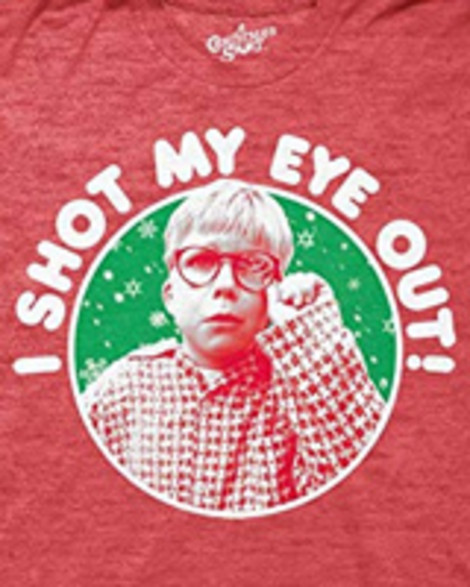 Christmas Story I Shot My Eye Out tee

This Christmas Story tee features the classic message from the holiday movie, "I shot my eye out." Be like Ralphie, aka the pink nightmare, and wear it under your bunny costume as you hold your Red Ryder BB Gun. Ralphie's father is clutches his most sacred possession, the leg lamp. His mom is tries to save the turkey from the dogs. In the movie, Ralphie's Aunt Clara gives him the pink bunny costume as a gift, and his mother makes him put it on since his aunt went through all the trouble to make it for him. Link to: Christmas Story I Shot My Eye Out 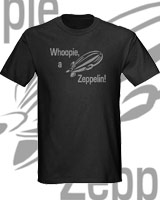 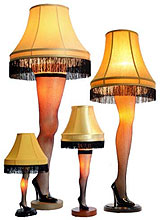 Available from the A Christmas Story House Gift Shop in Cleveland, these leg lamps are about as official as they come. Choose from a variety of sizes, from the beautiful 50-inch life-size movie replica to small desktop leg lamps. Night-lights and indoor/outdoor holiday light strands are also available. You can even choose to have your leg lamp shipped in a wooden crate that reads "FRAGILE" like in the movie. Give someone you love one of these "major awards." A Christmas Story leg lamp can be displayed in your window year round, or as the perfect holiday decoration. Link to: Christmas Story Leg Lamp Replicas 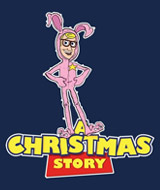 These Christmas Story t-shirts display an image of Woody from Toy Story wearing Ralphie Parker's pink bunny costume. Hopefully, Woody won't take out his eye with a BB gun like Ralphie almost did. It happened when Ralphie shot his carbine-action Red Ryder BB Gun at a paper target perched on top of a metal sign. Perhaps he should have heeded the warning of the A Christmas Story quote, "You will shoot your eye out!" If this happens to Woody, he can tell Buzz that an icicle broke his glasses. Link to: A Christmas Toy Story 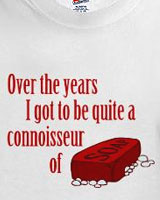 No one really likes the taste of soap, however, over the years, Ralphie Parker has become quite a connoisseur of it. In particular, his use of bad words has led him to develop a taste for Lifebuoy Soap. In the movie, he exclaims, "Oh Fudge!" after his father knocks a hubcap full of nuts from his hands, only he doesn't say, "fudge". This design displays Ralphie's quote about soap, while also expressing the humorous notion that over the years you have gotten to be quite a connoisseur of soap as well. Link to: Connoisseur of Soap 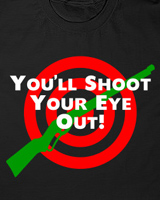 You'll Shoot Your Eye Out

Give this popular You'll Shoot Your Eye Out A Christmas Story t-shirt as a gift with the original movie poster. The poster image includes Ralphie Parker in his bunny suit, The Old Man holding his leg lamp, and Ralphie's mom losing the turkey to the neighbor's hound dogs. The latter prompted the Parker family to have Peking Duck instead, which resulted in a fit of laughter. Wear it as you watch the A Christmas Story movie. Link to: You'll Shoot Your Eye Out 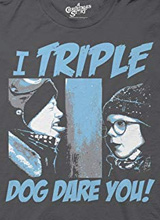 In one of the most memorable scenes from the movie, Ralphie's friends Flick and Schwartz argue over whether or not a person's tongue will stick to a frozen flagpole. After a series of dares, Schwartz issues Flick a "triple dog-dare," the coup de grace of all dares. In doing so, Schwartz bypasses the triple dare and goes straight from the double dog-dare to the triple dog-dare, "a slight breach of etiquette." As we know, poor Flick was wrong. Link to: Triple Dog-Dare You Quote 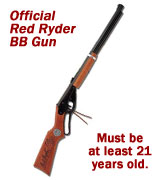 While other kids are excited to get a new sled, a football or in the case of Ralphie's brother, a toy Zeppelin, Ralphie Parker has his sights set on a Red Ryder Carbine-Action Range Model Air Rifle. In other words, he wants a BB Gun. Here's your chance to get the age-appropriate fan in your life an Official Red Ryder BB Gun. Just remind them not to shoot their eye out, or yours. Link to: Official Red Ryder BB Gun (1938 Model in Retro Box) 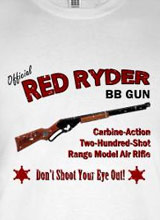 Take aim in this vintage looking You'll Shoot Your Eye Out Red Ryder BB Gun t-shirt. Manufactured by Daisy Outdoor Products, the Red Ryder BB Gun first went on sale in 1938, the year before the movie's fictional setting of December 1939. The gun was named after the comic strip character Red Ryder. It is arguably the most famous BB gun in American history. In the Christmas Story movie, Ralphie Parker wants a Red Ryder BB Gun for Christmas, but he is repeatedly rebuffed with the warning "You'll shoot your eye out". His father gives in and gets him the BB gun. Link to: Red Ryder BB Gun 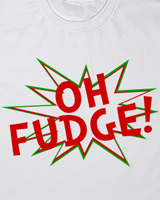 The fronts of these A Christmas Story t-shirts display a red and green image of Ralphie Parker's quote from the movie. We all remember his innocent face with the bar of Lifebuoy Soap in his mouth. It's his punishment for using the queen mother of dirty words, only we don't actually hear these words in the movie. Instead, we hear the A Christmas Story quote, "Oh Fudge!" displayed on this tee. The narrator uses this instead of the real expletive. Link to: Ralphie Parker "Oh Fudge!" Christmas Story 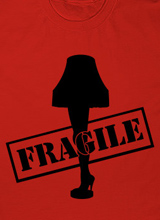 This tee celebrates Ralphie's dad's reaction upon receiving the Christmas Story leg lamp. Before he opens the wooden crate that contains the leg lamp, he attempts to make sense of the word printed on the outside of the crate. He sounds out each syllable, "FRA-GI-LE." Confused, he remarks, "It must be Italian." The front of this shirt displays the fragile warning along with the leg lamp. Wear it as you repeat the Old Man's quote, "It's a major award!" It is available in both men's and women's sizes. Link to: FRAGILE Leg Lamp 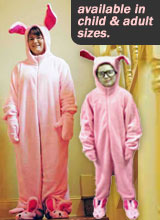 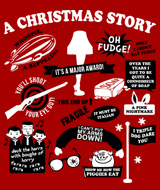 This funny collage shirt celebrates the time-honored triple dog dare, the Old Man's Major Award, the Pink Nightmare, "You'll shoot your eye out!", and other memorable images and quotes. The one-of-a-kind design is a homage to Ralphie and the entire A Christmas Story movie. It's the ideal choice for fans. Wear it and watch others point out their favorite movie moments, like Randy Parker eating like a pig and Ralphie's exclamation, "Oh Fudge!" Link to: A Christmas Story Quotes 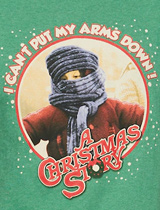 In the movie, Ralphie's little brother is so bundled up that he complains, "I can't put my arms down." The popular A Christmas Story quote is displayed on the fronts of these Christmas Story t-shirts, in addition to an image of Randy standing in the snow. The cumbersome outfit also prevents Randy from getting up when he falls. This is seen when Scut Farkus, the neighborhood bully, confronts several of the kids. As the narrator describes in the movie, "Randy lay there like a slug. It was his only defense." Link to: Randy - "I Can't Put My Arms Down." 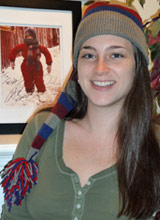 If you're looking for a unique way to express your love for the movie, these replica A Christmas Story hats are an excellent option. It should be noted that the designer studied the orginal hats from the movie in order to create these highly authentic replicas. The selection includes Randy's stocking cap (pictured), Schwartz's stocking hat, Flick's leather aviator cap, Ralphie's snow hat and Randy Parker's scarf replica. Even better, they can also be used as part of A Christmas Story costume. Keep your head warm as you give a nod to the classic holiday movie. Link to: Christmas Story Hats